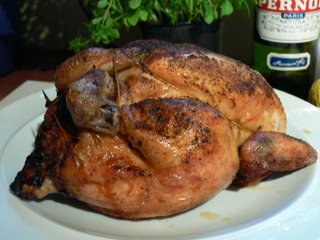 I was meant to be going to New Orleans early next month, but unfortunately that trip’s been postponed until next year (chiz chiz chiz). I’m meant to be writing about the place, and about its unique food culture; New Orleans is the least American of American cities, and has a cuisine unlike anything else you’ll find in the US. That cuisine is influenced by the fertile land and sea surrounding the city, and also by the mix of cultures and ethnicities that called the city home – African, French, Acadian (or Cajun) and Creole flavours coming together to create something you simply won’t find elsewhere.

To console myself over my postponed trip, I decided to invent a chicken stuffing along the lines of something you might see in Louisiana (if you squint a bit). This stuffing is gorgeous – it employs the so-called “holy trinity” of green bell peppers, celery and onion as a base, with garlicky, cheesy bread croutons which retain their crunch through the cooking, some typical Louisiana spicing, and a little tin of smoked oysters, chopped finely, to give the whole dish a warm, smoky background. You may think you don’t like smoked oysters – they look pretty unprepossessing, and they can taste a bit strong when used on toast or as canapés – but in this dish they just give the stuffing and the meat of the bird a wonderfully rich, umami smokiness. Surprisingly (totally) un-fishy. The recipe will make enough to stuff a 1.5kg bird and to prepare a separate tray of the stuffing to serve with the meal – you’ll want a separate tray, because it’s totally delicious.

To serve 4 (with some leftovers for sandwiches tomorrow, if you’re lucky), you’ll need:

Take the chicken out of the fridge a couple of hours before cooking to allow it to come to room temperature. Dry the skin well and snip any fat you find inside the cavity out of the bird – either discard it or render it down in a dry frying pan to make schmaltz to use for another recipe. Preheat the oven to 200°C (400°F) for the croutons.

Remove the crusts from the bread and chop the white part into cubes about 2cm on each side (a large-ish crouton is nice here, the outside turning crisp and the inside retaining a bit of squashiness). Arrange the croutons on a baking sheet – they should cover the bottom in one layer. If you find you have more space, chop a few more croutons out of the remains of the loaf. Grate the garlic into the olive oil, mix well and drizzle over the croutons. Toss them well in the oil so every side is covered with the garlicky mixture, then sprinkle over the parmesan and toss again. Bake in the hot oven for ten minutes until golden, but start checking after eight minutes – these are quite easy to burn. Turn the oven temperature up to 230°C (450° F) and set the finished croutons aside. 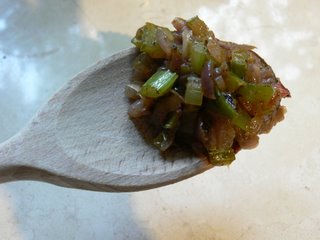 You can start on the other stuffing ingredients while the croutons are cooking. Chop the celery, onions and pepper finely and fry off in a generous knob of butter with the spices, keeping everything in the frying pan on the move, until the onions are turning golden, as in the picture. Remove the contents of the pan to a large mixing bowl, and add the chopped parsley, the juice and zest of the lemon, the drained and finely chopped oysters and the soy sauce. Fold the croutons into this mixture and taste it for seasoning – you may not find you need any salt, but a generous amount of pepper is good here. Stuff the chicken with the mixture, using toothpicks to hold the flaps of skin at the end of the chicken closed. There will be plenty of stuffing left over; put it in a small baking dish and keep to one side until the end of the chicken’s cooking time. 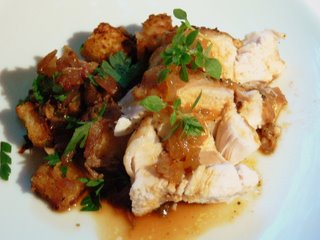 Rub the chicken with plenty of salt and roast it, covered with a piece of tin foil, for 1 hour and 20 minutes, removing the foil and adding the stuffing dish for the last 15 minutes. Prick the chicken at the fattest part of its thigh at the end of the cooking time to check it’s done – the juices should run clear. If they are pink, get the stuffing tray out of the oven and keep it in a warm place, and give the chicken another 10 minutes in the oven, repeating the prick test at the end of this time. Make gravy from the pan juices and a splash of stock and white wine if you fancy some lubrication, and scatter the chicken and stuffing with fresh herbs of your choice – I used some Cypriot basil and some parsley. The stuffing and chicken are fantastic with a tart salad, sautéed potatoes and lemon wedges.