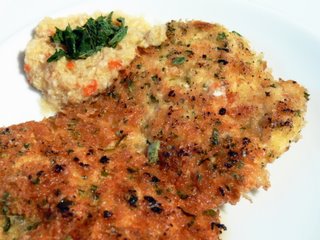 I am currently all a-tizz about kaffir lime leaves. They’re hard to find out here in the sodden fen; not all oriental grocers stock the fresh leaves (which are very pretty and look like a pair of leaves growing on the same central rib). When I have spotted them in shops, they have often been a bit elderly, and not as aromatic as you’ll want them to be for cooking. Happily, you’ll find them shredded and frozen in some supermarket freezer cabinets; there are currently a couple of packs in my freezer at home. They have a wonderful citrus fragrance, almost as if you were sniffing fresh lime zest through an olfactory magnifying glass. (The zest of a kaffir lime is astonishingly good stuff, but sadly I’ve only seen the fruit for sale in Malaysia, which isn’t much help for UK home cooks.)

In most cooking, we use kaffir lime leaves in a similar way to bay leaves – as an aromatic to be infused in a wet mixture like a curry, then discarded before eating. The shredded leaves gave me an idea, though – how about using them to make a crispy crust with panko breadcrumbs for a neutral-tasting meat like chicken? Paired up with a fresh Thai chilli and ginger sauce, this turns out to be exactly how summer eating should be.

I’ve butterflied the chicken breasts and beaten them flat with a rolling pin to give them a bigger crispy surface area; this also helps them to cook really fast, preserving all the lovely lime flavour. I would like to believe that one per person is a sensible helping, but these were so good we ended up eating two each. To make four breaded, butterflied chicken breasts, you’ll need:

Chicken
4 skinless, boneless chicken breasts
4 heaped tablespoons flour
1 egg
8 heaped tablespoons panko breadcrumbs (if you can’t find Japanese panko crumbs, just use slices of white bread and whizz them to shrapnel in the food processor. Panko has a brilliant crispiness, though, and is worth seeking out.)
4 tablespoons shredded kaffir lime leaves (frozen or fresh – don’t get the dried ones, which will leave you feeling as if you are cooking with cardboard)
Peanut oil or a flavourless oil for frying

It’s easiest to make the sauce before you start on the chicken, which will need your attention for the very short time you’ll be cooking it. Just put all the sauce ingredients except the mint in a mortar and pestle or (easier) a food processor or liquidiser, and process until you’ve a slightly chunky, wet sauce. Unlike commercial sauces, it won’t be red – but it’s none the worse for that. Chop the mint and sprinkle it over the sauce.

Start work on the chicken by butterflying your chicken breasts. This is far easier than you may have been expecting – just lay them flat, push a small, sharp knife into the thicker side of the chicken breast and make a horizontal cut almost all the way through to the other side. You should be able to open your chicken breast out like a book, with the fatter edge of the breast acting as the book’s spine. Place the butterflied chicken breast between two pieces of cling film on a chopping board (the cling film stops them from sticking) and wallop the hell out of them with your rolling pin, until the chicken is a thin, even escalope, about half a centimetre thick. Don’t worry about raggedy edges – the breading you’re about to apply is amazingly forgiving.

Put the flour, seasoned with some salt and pepper, in one bowl, the beaten egg in a second and the crumbs, mixed well with the lime leaves, in a third. Dip the chicken in the flour, then the egg, then the crumbs, making sure it’s coated well at every stage. Fry over a high heat for 2-3 minutes per side, until the crumbs are golden and crisp, and serve with the sauce, a salad or some stir-fried veg, and your choice of rice or noodles.