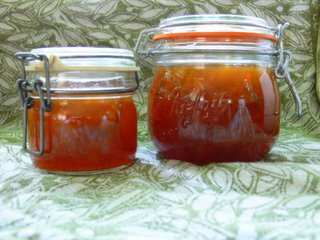 Summer’s been a bit of a washout here, but it turns out that the hot start and wet middle and end of the season have meant that the plum harvest this year has been stupendous. (So has the wasp harvest, so be careful if you’re collecting your own.) I don’t have my own plum tree, but I’ve been scrumping plums from trees in a neighbour’s garden across the green that overhang a footpath, eating them at friends’ houses, and buying bushels of the things at the market.

Greengages are my favourite English plum. They’re (surprise!) pale green, extraordinarily sweet, and wonderfully juicy, with golden flesh when ripe. Like Victoria plums, they’re perfect for jam-making, keeping a lovely plummy fragrance when cooked down. They’re very obliging fruits; they’re full of pectin, so you won’t need to add any setting agents to the jam; and you don’t even need to stone them before cooking, as the stones will loosen themselves for you as the fruit cooks down, floating to the top of the jam so you can skim them off as they bob to the surface.

I like the pure plum flavour you get from this jam, but some people like to add a vanilla pod to the saucepan for some extra fragrance. For me, it’s not the best use of an expensive pod; this jam just employs greengages, water and sugar, and it’s none the worse for that. When selecting your greengages, try to find fruits which are ripe but not over-squishy, and reject any with bruises or mouldy bits, as this will affect the length of time your jam will keep once opened.

I find it hard to think about preserves (especially fruit ones) in terms of kilogrammes and litres, so I’m afraid you’ll need to dig out the imperial weights for this one. To make jam from 2lb of ripe greengages, making about 3lb jam, you’ll need:

Sterilise some jars before you begin. Put the whole greengages and the water in a large pan, and simmer for 20 minutes, stirring occasionally, until the fruits are very soft. Pour in the sugar, stir well and simmer hard, fishing out the stones as they bob to the surface, until the mixture reaches a jam set (it should measure 110°C on a jam thermometer; if you don’t have one, just dribble a bit of the jam onto a cold saucer and check that it’s reached a jammy texture). Skim any scum off the surface and pour into the sterilised jars, sealing immediately.

This is, of course, gorgeous on toast, crumpets or a croissant; my favourite thing to do with this jam is to dollop a big tablespoonful into the middle of a bowl of plain yoghurt for breakfast.