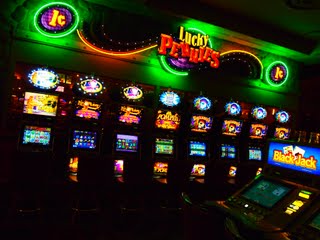 So you’re in Las Vegas, and you’re craving really, really good sushi and sashimi. You’re almost certainly based somewhere on the Strip, and as a result you’re faced with an embarrassment of choice. All of it really, really, really expensive.

There is a vast amount of Japanese food on the Strip, which there simply isn’t space to cover here. Shibuya at MGM Grand and Okada at the Wynn are excellent, and come near the top of my personal list. Apparently Brandon Flowers from the Killers has been seen stuffing his face at Sushi Roku at the Forum Shops; and, of course, there’s an outpost of Nobu at the Hard Rock – these restaurants are probably among the most fashionable of the sushi joints you’ll find in town. Thing is, if you are set on eating the best the restaurant has to offer, this means ordering the omakase menu (the chef’s choice of what is freshest and best on the day). And this usually means taking out a new mortgage. Shibuya’s omakase menu is $115 per person, Okada’s omakase isn’t advertised – but the Wynn press office would like you to know that there’s a very special omakase they’ll do you for $1500 if you win big. Sushi Roku’s omakase is a rather more reasonable $90, but it’s a very Americanised, chain sushi experience, full of mayonnaise, fried bits and avocado – go to spot rock stars, not for the food. And Nobu has degenerated from its 1990s position as a real temple to food to being a place to see and be seen with some incidental raw fish. An omakase menu there will set you back “$100, $150 and up”.

As we’ve noticed before, as soon as you get away from the neon and the crowds on the Strip, restaurant prices tumble. After all, the locals need somewhere to eat, and some of them are pretty exacting. So if you can gather yourself together for long enough to drive the six whole miles out to Sen of Japan, you’ll find an omakase menu that will make your soul sing, for a $55 which seems absurd when held against some of the menus at the big casinos, where you’ll get less for…more. There are no semi-naked, gyrating ladies, like you’ll find at Tao at the Venetian or Social House at TI. There are no floating tables suspended beneath fabulous images projected onto waterfalls, like there are at Okada. I like it all the more for that. 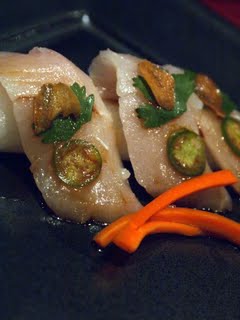 Hiro Nakano, the chef/owner at Sen of Japan (8480 W Desert Inn Road #F1, Las Vegas 89117, tel. (702) 871-7781) used to be head chef at Nobu (pre-downward-slippage, judging by what we were served here). He prepares the hot food, while a chef from the sadly defunct Shintaro at Bellagio is poised behind the sushi bar for the cold bits. Service was terrific, chatty and friendly; our server, John, seemed genuinely amazed that two Brits on holiday would travel that six whole miles for good food. And the food…hoo boy.

Sen’s omakase changes daily (as all omakase menus should, and few seem to), so what we had will be representative but not necessarily what you’ll find when you visit. 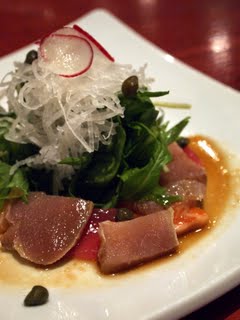 We opened with yellowtail sashimi (above), laid on a roll of shaved daikon, garnished with slivers of jalapeño, crisp garlic shavings, coriander and soy. Clean, beautifully balanced, and as fresh as you like. Next out was a generous bowl of sashimi and mizuna salad, flavoured, alongside the expected soy, with garlic olive oil and some very surprising capers. This is (as you’ll also have gathered from the coriander and jalapeños with the yellowtail) not Japanese food in its purest form, but I am not an authentiseeker in these matters; if you’re going to insist on limiting your set of ingredients to those found in Japan, you’ll be missing out on some really interesting and apposite flavour combinations – and Chef Nakano is extraordinarily good at putting these together. 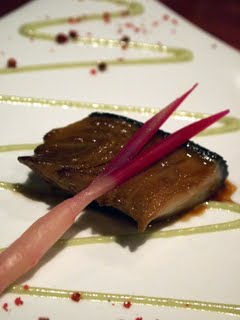 On to the hot courses. First out, an oddly familiar black cod (actually a kind of bass) in miso, served with a pickled ginger shoot on a plate swirled with wasabi-tinted Japanese mayonnaise and crushed pink peppercorns. This is, of course, the same black cod that was made famous by Nobu, Nakano’s last head-chefly posting, presented rather differently. Wherever I’ve eaten a similar dish (and this does crop up at an awful lot of Japanese restaurants) I’ve loved it – there’s a recipe on Gastronomy Domine for a similar, grilled arrangement you can make with some salmon, black cod being hard to find in most fishmongers. Mine’s nothing like as pretty as this (it’s a recipe I was given by a Japanese friend about a decade ago, and is more along the lines of something you’d find in a Japanese home), but it tastes great. For prettiness, though, the Sen of Japan version takes the biscuit – and we cleaned those long plates. 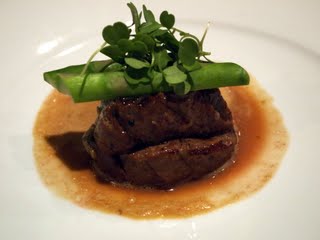 Filet mignon with asparagus and a soy-mustard sauce. Probably my least favourite dish of the evening; tasty, juicy, nicely hung, perfectly medium-rare – but it just wasn’t as interesting as everything else we were served. Still; this is a very steak-oriented part of the world, and everywhere else we’ve had menus of this sort in Vegas, a steak has popped up somewhere. I’m told that if you pay for the more expensive omakase menu at Sen, you’ll find this steak transmogrified into a piece of Kobe beef, bits of foie gras decorating other courses, and things like lobster and caviar popping up here and there. We elected to avoid the pricier ingredients so we could concentrate on the fish, but you might decide it’s worth pushing the foie boat out. Next up: five pieces of nigiri, with two maki rolls. You’re looking (bottom to top) at tuna (maguro), fluke (a generic name for flatf
ish – hirame), salmon (sake), black snapper (kuro dai) and a cooked prawn (shrimp if you’re American, ebi if you’re Japanese). The rolls, part-visible at the top, were more maguro. All good, all fresh, all nicely seasoned, but not, again, terribly unusual; I suspect that if we’d managed to score seats at the sushi bar and had been able to talk to the sushi chef, things might have turned out a little more exciting. What was spectacular was the accompanying miso soup, which arrived with juicy, fresh littleneck clams straight from California, still in their shells (and, judging by the flavour, alive until moments ago), bobbing around in the hot broth, which took on a breath of flavour from the juices of the shellfish. Beautiful. 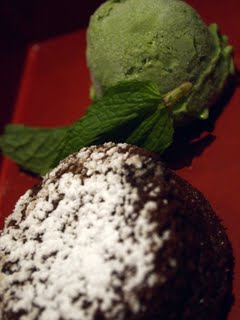 There’s absolutely no reason to stick to the Strip for your Vegas dining. You can even go celebrity-spotting at Sen; apparently Andre Agassi is a regular, as is the city’s ex-mob-lawyer mayor, Oscar Goodman. Admittedly, this is not the handsomest dining room in town, but then again, it’s not meant to be; this is just an excellent neighbourhood sushi-ya which happens to serve up food that will compete with anything you can find on the strip at much, much more sensible prices. Head out there next time you’re in town, and tell them I sent you.