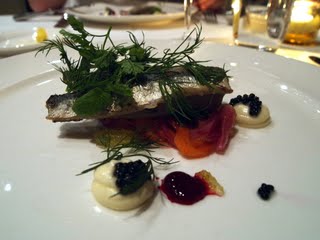 I’ve just spent a few days in Helsinki, where the chill and dark at this time of year is easily remedied by a stiff glass of hot grog, a spell in the sauna and a few handsome servings of fish roe. Romantic lunches in the half-light at Kappeli, the cast iron and glass confection on Esplanadi; strolling through the covered market with a smoked lamprey in one hand (many thanks to the friendly Finn who suggested I look out for some; it’s the end of the lamprey season); watching the herring gulls pick fish from the harbour and sneaking them bits of disappointing cake (also from the market). The sun does make an appearance at the end of November, but it’s not a sun you’ll recognise, staying low and watery in the sky. The light does funny things to your body clock – suddenly I understand why the Finns traditionally eat supper so early, especially in the winter.

So we booked a nice early table at Nokka (Kanavaranta 7, 00160 Helsinki), a restaurant that came heavily recommended by a friend. Behind the Russian Orthodox cathedral (and very close to Bellevue, which I visited last year), the restaurant is housed in an old warehouse looking out onto the sea, all orchids, vaulted red brick and giant wooden beams. The ten freezing minutes of huddling under umbrellas that we spent getting there were erased by a punchbowl full of wintertime grog and a great view into the open kitchen, where casually blond chefs swished around efficiently. More blondes, speaking perfect English, Finnish, Swedish, German and plenty of other languages besides, provide some of the best-trained service I’ve come across in this country. This room is slick, it’s stylish, and the food matches up to it.

Nokka’s menu is built around impeccable local sourcing. There’s a page at the front of the menu about the various fishermen, farms, herb-growers, mushroom foragers and so forth that they use; the lamb, apparently, is from somewhere called Snappertuna, which has to be one of the best place names ever. We ordered the four-course Helsinki menu at €59 – a six-course version is available for €69 for the very hungry. Everything on the plate is seasonal – a real challenge in a Baltic November, but extremely well-conceived, with root vegetables and squashes where you might look for greener things in summer.

We opened with a little cup of wild mushroom soup as an amuse. Mushrooms and other foragables like berries have a very special place in Finnish food culture, and really do pop up all over the place; I found a clump of chanterelles growing on the pathway up to the Orthodox cathedral. As is traditional in Finnish soups, our little cups were heavily dosed with cream – on the edge of being rich, but very well-judged in a portion this size, where you’re only eating a mouthful but want it to be a memorable one.

Fish, especially herring, is what Helsinki’s all about. This little fillet (picture at the top of the page) had been marinaded in a tart preserving mixture, then gently grilled to lift its flavour even more. The process had given it a wonderful texture – soft and a little crisp around the edges. Tiny dollops of pureed potatoes (the Finns are justly proud of their potatoes, which have exceptional flavour thanks to those long summer days of sunshine) were topped with a little fish roe – a surprisingly good combination, rich and gorgeously balanced between the nutty, salty roe and smooth, creamy purée, which I’m going to try to do something with myself when the Jersey Royals come in next year. Add a little fresh beet salad, some sweet, gently pickled slices of raw carrot and red onion and a handful of dill and chervil, and you’ve got one of the best starters I’ve eaten all year. It’s refreshing to find a plate full of garnish where the garnish is actually meaningful – nothing on this plate would have been as good on its own as the glorious whole was. 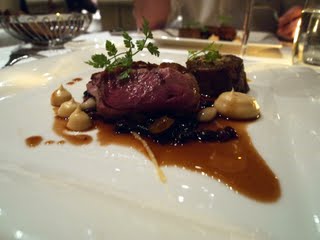 Alhopakka duck breast next, with a cardamom sauce and straw-smoked, puréed parsnips. The duck’s leg, confited and shredded, was pressed into the timbale you can see at the side of the plate. Again, everything on the plate was part of a well-conceived whole – the smoked parsnip purée marrying so well with the cardamom, which paired so well with the fatty duck, which worked so well with the turtle beans and apricots tucked beneath it. And this was a big portion – as the meal progressed, we noticed that some who had ordered the six-course menu at other tables were struggling to finish everything.

Cheeses arrived, just a brie and a comte, served with no bread, but with some toasted nuts and seeds and fruit jellies. (No picture. I was getting funny looks from an adjacent table.) Not as exciting or unusual as the evening’s other dishes, but a nice opportunity to get our ducks in a row, as it were, before attacking dessert. 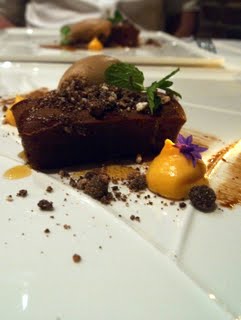 So many places do a warm chocolate cake with a melty middle that it’s become a bit of a cliche. A very jolly one, though, which is made considerably more interesting by the addition of pumpkin (more puree!), some chocolate rubble and a handsome dollop of very dark, malt ice cream. It’s been a few days and I still can’t work out whether or not I actually liked that pumpkin, a little bland in texture against the richness of all the other ingredients, but it certainly worked to tamp down the sweetness of the dish.

I’ve one issue with our meal, and it’s not really Nokka’s fault. Duty on alcohol is so high in Finland that ordering a bottle of wine with dinner is a considerable expense, and you’re not going to find anything you’ll enjoy drinking for under €60 a bottle – more than we paid for all four courses. This also has a lot to do with the current exchange rate, of course, which is particularly horrible if you’re travelling from the UK or US. (The pound and the euro are nearly equivalent at the moment, which in a city which starts out as pricey as Helsinki means you are basically precluded from doing any shopping at all.) So I drank a single glass of cava with this meal, where it really deserved a nice fat bottle of Burgundy.

Try Helsinki in November. It’s quiet, the room rates are fantastic (I finally scored a room at the Kamp, the city’s only five-star hotel, which came in at about €150 less per night than I was quoted back in April), and there’s a strangely intense romance to the dying light. And lord, the food’s fun.