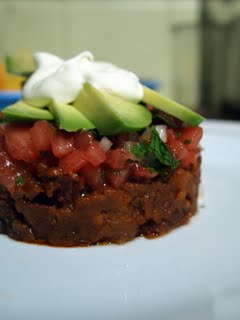 This photo reminds me that the kitchen really, really needs painting in a colour that doesn’t look like bloodless frogs.

Anyway. About the food. This is my slightly European-ised (and it’s no worse for that) take on Mexican refried beans. You can serve yours in chi-chi little towers like this if you’re feeling all…retentive, or you can just dollop piles of beans, salsa and avocado/crème fraîche on the plate however you fancy. I have a sense that life is probably too short for chi-chi little towers.

This recipe makes more in the way of beans than you’ll eat at one sitting; you’ll probably get two or three meals for four out of the amounts below. (The salsa amounts below are for one meal.) This is because the long simmering of the beans and the making of the sauce that flavours them is quite time-consuming, so it’s worth making plenty and freezing the remainder before you mash them to cook quickly at a later date if you want to save yourself some work. To keep the chorizo crisp, you’ll need to fry some up each time you make this (although you can, of course, leave it out, especially if you have a vegetarian to feed); chopping and frying the sausage is not so much of a hardship, though, given how good it tastes.

Refritos, despite the title of this post, doesn’t actually mean ‘refried’, but ‘well-fried’. These are really worth the effort; they’re silky-smooth in the mouth, and intensely savoury: a billion times better than anything you might have had out of a can. Amazingly, they also do not make you fart. To make a large panful of beans for three meals and enough salsa for one meal, you’ll need:

Chop the onion into rough dice and put it in a large saucepan with the rinsed beans, bay leaves, cloves, dried chillies and water. Bring to a simmer, put the lid on and simmer for 2½ hours, until the beans are soft. Check during cooking to make sure there is plenty of water for the beans to swim around in, adding a little more if you think they need it.

When the 2½ hours is up, halve the shallots and cut them into half-moons. In a large frying pan, saute them in two tablespoons of bacon fat or chorizo fat (using these fats does simply astonishing things to the flavour of this dish, but you can use olive oil if they make you nervous or if you are not the sort of person who keeps jars of such artery-clogging things in the fridge) with the anchovies. The anchovies will melt and break down. They will not make the dish taste at all fishy – they just add an unidentifiable and delicious richness and depth to its structure. Keep sauteeing, stirring every now and then, until the shallots are golden. Add the tin of tomatoes to the pan with the chipotles in adobo and Spanish paprika, and simmer until thickened. Using two different kinds of smoked chillies may look like overkill, but they both have very different characters, the chipotles dark and chocolatey in their heat, and the paprika much brighter. Together they’re fantastic here.

Add the thickened mixture to the beans pan with a tablespoon of salt (smoked Maldon salt is good, but isn’t totally necessary) and return it to the heat, this time uncovered. Simmer, stirring occasionally, until the liquid in the pan takes on a texture like the sauce in a can of baked beans. You’ll be able to tell when it’s ready; it can take anything from 45 minutes to a couple of hours.

You can serve the beans now as a kind of baked bean. This is also the point at which you should stop to reserve two thirds of the beans for cooking later on. Set the third you are using for refried beans aside until you are nearly ready to eat.

For the salsa, just peel and seed the tomatoes, dice and mix with the diced shallot and chopped coriander, and squeeze over lime juice to taste. Chop a chorizo into coins, quarter each of these coins and dry-fry them until they are crisp and rustling in the pan. Set aside in a small bowl, reserving the fat for another go at the beans.

To fry the beans, eat 2 tablespoons of bacon or chorizo fat in a large saucepan until very hot. Mash the beans in their sauce with a potato masher. They shouldn’t be completely smooth, but work at it until most of the beans are reduced to a paste. Dollop the paste into the hot fat. It will hiss and spit. Use a wooden spoon to stir the beans around in the frying pan, and keep stirring every couple of minutes until all the fat is absorbed and the liquid from the beans has evaporated to leave them thick and dense.

Stir the crispy chorizo into the beans and serve with a hearty spoonful of the salsa, some sliced avocado and a good dollop of crème fraîche. This makes a great meal on its own. If you’re feeling greedy, it’s also a brilliant accompaniment for a steak.

7 Replies to “Refried beans with salsa and chorizo”