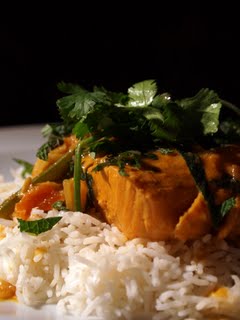 If you made a batch of the curry paste to cook the prawns earlier this week, you’ll still have half of it in a little bowl in the fridge. This is a very easy dish to cook, and many of the ingredients should already be sitting around in your storecupboard. Swap the green beans for another appropriate-feeling vegetable if you fancy, in keeping with the “what’s in the fridge” nature of this one.

My salmon was bought and frozen before Christmas. It was going to be made into gravadlax before I realised that the fillet I’d bought had, for some reason, been pre-skinned. A skinned salmon fillet’s a pest to cook with if you’re not doing something very simple with it – too much moving around and it’ll flake into bits. So a gentle poaching in a rich curry sauce is an ideal method for a fragile piece of fish like this. If your salmon has the skin on still, so much the better. Don’t bother to remove it before cooking.

Chop the onion into medium dice and fry it with the bay leaves, cinnamon stick and curry powder in a large pan until translucent. Add the curry paste to the pan and cook, stirring all the time, for five minutes. Pour over the coconut milk and tomatoes, and stir through the potatoes. Bring the mixture to a simmer and cook for 10 minutes without a lid, stirring occasionally.

Stir in the chopped beans and slide the salmon into the dish, making sure it is covered with the bubbling sauce. Put the lid on and continue to simmer for 12 minutes.

While the salmon is cooking, chop the mint leaves. When the time is up, stir the lime juice into the curry with salt and pepper to taste. Serve over white rice, scatter the herbs over each serving and get stuck in.