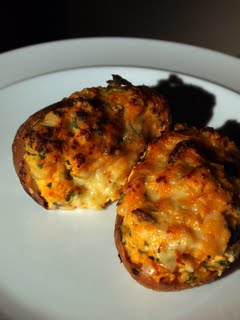 I seem to be having a bit of a thing about chorizo at the moment. Blame this never-ending winter – a hot blast of smoke, paprika and garlic is surprisingly uplifting when it’s this steadily grim outside.

This is a great storecupboard dish, and one that goes down very well with kids (if yours don’t tolerate the heat of the paprika, substitute a teaspoon of Dijon mustard. You can also use good ham, preferably home-cooked, in place of the chorizo). This is fatsome and packed with carbs: it’s absolutely not a diet dish. Cook it on a day when you’ve been yomping in the woods or chopping logs. To serve four, you’ll need:

Preheat the oven to 200°C (450°F). Use your hands to rub the olive oil into the skins of the potatoes, and dredge them with plenty of flaky salt. I used smoked Maldon salt, which marries nicely with the other smoky flavours in this dish. Bake the potatoes for an hour and a half.

While the potatoes are cooking, chop the chorizo into small pieces and fry them in a dry pan until the fat is running. Set aside. Chop and grate the other ingredients.

When the potatoes are ready, slice them in half and, holding the potato in an oven glove, scoop out the flesh into a mixing bowl. You’ll be left with a nice little potato-skin cup. Stir the cheeses (reserving a little cheddar to sprinkle over the top), shallot, garlic, parsley and paprika into the fluffy potato with a large pinch of salt, and when everything is well-mixed, stir in the chorizo and its fat. Pile the mixture back into the potato skins, and top with the reserved cheese.

Return the filled skins to the oven for another 20 minutes, until golden brown on top, and serve piping hot.