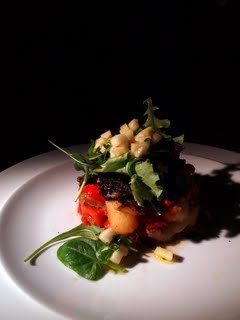 I’ve never really understood why some people get so squeamish about black pudding. I know, I know – it’s blood, back fat and barley – but surely that’s no more upsetting than the gubbins that goes into a standard sausage? Dr W encourages me to mention a chitterling and tripe-tastic andouillette he ate in Paris once, which, he claims, “tasted of bums”. Black pudding is infinitely nicer.

My suspicion is that people recalling cut lips imagine black puddings to taste bloody and metallic. These flavours are absent from a black pudding, which is actually deeply savoury, delicately spiced (especially if you get your mitts on a particularly good one, like these from Bury in Lancashire), and, cooked properly, has a wonderful texture: crisp, sticky and crumbling all at once.

The Bury black pudding is, for my tastes, the most reliable and delicious you’ll find in the UK, and many butchers and supermarkets all over the country carry them – you can also order them online from the makers. (At a supermarket, you’re more likely to find one on the deli counter than the butchery counter.) They’re seriously, seriously good; porky, plump and gorgeously spiced. The recipe is a secret, but apparently there’s pennyroyal, fennel and all kinds of other good stuff in there. Do try to go out of your way to find a couple for this recipe. 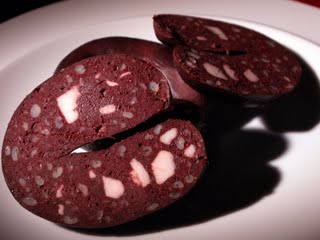 Chop the potatoes without peeling them into 1½ cm dice, and slice the shallots into rounds. Fry over a medium flame in a large pan using two tablespoons of the bacon fat, turning frequently, until golden (about 20-25 minutes). Ten minutes or so before the potatoes are ready, fry the peeled, halved black puddings in the remaining bacon fat for five minute on each side.

While the potatoes and black pudding are cooking, put the peppers under the grill, turning every few minutes, until the skins are blackened. Put them straight into an airtight plastic box and seal with the lid while you prepare the other ingredients. The steam from the peppers will help to release the skins. Peel the peppers after five minutes in the box, discarding the skins and reserving any juices. Halve them and slice into strips.

Chop the apple into small dice and make up the vinaigrette with the vinegar, honey, walnut and grape oils and any juices from the peppers, with a small pinch of salt. Stir through the apple and thyme and set aside.

When you are ready to put the dish together, stir the peppers into the hot potatoes. Now, normally I abhor the chi-chi “towers of things on a plate” thing, but this is a recipe it suits well. So get out a large pastry cutter to use as a template, and pile the potato mixture onto a plate. Use a sharp knife on a chopping board to dice the black pudding roughly and heap it on top of the potatoes. Top with a handful of salad and spoon the apple dressing over the top. Serve immediately.