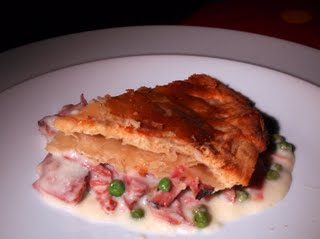 There’s often a home-cooked ham in the fridge here. Always the control freak, I like to be able to season and flavour my own ham for sandwiches, pasta dishes and what have you. A piece of smoked gammon simmered in some aromatics of your choosing for a few hours will always be better (and work out cheaper) than slices from the deli or supermarket, and is very little work – plop it into a pan, bring to a simmer, and leave for a few hours while you try on shoes or whatever else it is you fill your days with.

I’m still a big fan of the Coca Cola stock, beefed up with some aromatics, for hams – it’s really worth a whirl if you’ve not tried it yet. Ginger beer is also alarmingly, counterintuitively good here. If you still can’t stomach the idea, a ham is also delicious poached in water with a slug of wine, a few tablespoons of sugar, some onions, garlic and spices like cloves, fennel, star anise and bay. Experiment, and settle on what you like. In the recipe below, I’m assuming you already have a cooked ham at hand. For this sort of recipe, where rather than slicing the ham you will be shredding or cutting it into chunks, I really like a bacon collar. It’s a less monolithic bit of meat than some of the slicing cuts, and has good marbling which helps push the flavour of the stock deep into the meat.

This recipe is all about the aromatics in the ham and in the bechamel sauce. Infusing the milk for your white sauce with shallot, bay, cloves, parsley, whole peppercorns and a stick of celery raises it from a rather boring binder and filler to something rather delicious and gorgeously scented. If you find this all rather a faff, bechamel freezes very well, so you can save time by making plenty and freezing it in boxes. (You can also freeze the infused milk before turning it into bechamel, bread sauce or other sauces – like the finished bechamel, it holds its flavour very successfully.)

Finally, the pastry. I’ve made a rough puff here to cover the pie (the amount of pastry below makes enough for two pies, and I haven’t halved it because cooking with half an egg isn’t very practical – again, this freezes well, or you can keep the extra pastry in the fridge for up to three days). It’s very easy, deliciously flaky, and melts in the mouth. All the same, I won’t hold it against you if you want to save some time and use some pre-prepared pastry instead.

Start by infusing the milk. Peel and halve the shallots, and stud them with the cloves. Put all the aromatics in a thick-bottomed pan with the milk, and bring very slowly to a simmer. Turn the heat off, put the lid on and leave to infuse in a warm place for three hours.

While the milk is infusing, put the pastry together. Beat the egg into a bowl with the sugar, lemon juice and water. Beat the mixture and chill in the fridge. Use your fingers to rub the cold butter into the flour until it resembles breadcrumbs, and chop the lard (also straight from the fridge) into pieces about the size of the top joint of your little finger. Stir it into the flour/butter mixture. Add the egg mixture bit by bit, stirring the mixture with a knife until everything comes together. Put the pastry into a freezer bag and rest it the fridge for at least half an hour, until you are ready to put the pie together.

Strain the solid ingredients out of the milk and discard them. Make the bechamel sauce by melting the butter and flour together over a low heat in a clean pan, and cook, stirring, for five minutes. Add the milk a small amount at a time, stirring sauce constantly as you go. The sauce will thicken as you work. Keep adding milk bit by bit until it is all incorporated, and the sauce is thickened. Don’t add salt to the sauce; there should be enough in the ham to season the whole dish.

To assemble the pie, chop the ham into bite-sized pieces. Put a layer of ham in the bottom of a pie dish, cover with a layer of peas, and repeat until you have used all the ham and peas up. Pour over the bechamel sauce until your pie dish is filled. Depending on the size of your dish, you may have some left over, but I’m sure you’ll find something to do with it.

Cut the ball of pastry in half and put the half you’re not using in the fridge or freezer.

Roll the pastry you are using out in a large rectangle, and fold it into three, as if it was a piece of A4 paper you are going to put into an envelope. Give the pastry rectangle a quarter turn, roll it out into a large piece again, fold into three, roll out and repeat four or five times. You’ll end up with a sheet of pastry about half a centimetre thick made up of many layers. Lay the pastry sheet on top of the pie dish, cut the excess off the edges and pinch the pastry into place on the dish. Cut a large cross in the middle to allow steam to escape and brush with a beaten egg yolk.

3 Replies to “Ham and pea pie with rough puff pastry”