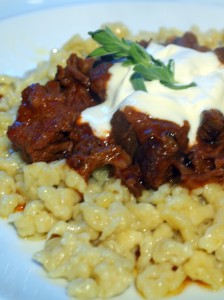 A complicated set of circumstances saw me having to leave China after a week and flying straight to Hungary. Budapest is a beautiful city, but it’s not somewhere I’d recommend for those of you who travel to eat; menus around the city bear identical lists of paprika-heavy casseroles, and there’s not much in the way of haute cuisine. I found two standout restaurants, one in Buda and one in Pest. Café Pierrot, up in the castle district in Buda, is a pricey cellar restaurant with a pretty garden and a French chef, where you’ll find the best foie gras preparations we ate in the city (and Hungary is the biggest producer and consumer of the stuff per capita in the world). And Café Kör, down in Pest by the basilica, has a menu of Austro-Hungarian classics with a really charming wine bar atmosphere.

I really don’t mean to slam paprika-heavy casseroles above (and given that I’ve made one here, you can probably see that I’m actually rather fond of them) – they only get tired after a week or so. I became horribly addicted to nokedli, a spaetzle-ish kind of tiny dumpling, while we were in Budapest. They’re a perfect accompaniment to these rich, dense casseroles, so I swiped a nokedli recipe off the back of a nokedli maker in a Buda craft market (stupidly, I didn’t buy the nokedli maker, which would have meant an easier time for my and Dr W’s ladling arms when it came to making this) and made up a goulash to go with them. If you don’t fancy nokedli with your meal, the casserole is very easy and will go beautifully with rice or with mashed potatoes.

A note on goulash and etymology. The word comes from the Hungarian gulyás (pronounced as we in the UK pronounce goulash – Hungarian is one of those languages where none of the consonants and very few of the vowels do what you think they will), which means cow-herd. If you order a goulash in Hungary you’ll either get a a beef or veal soup, which may or may not contain paprika, or an un-thickened stew with beef, veal and vegetables. The paprika casserole which we in the UK call a goulash is called a papricás (pronounced “paprikash”) or pörkölt – it’s also a dish which originates with Hungarian herdsmen, but somehow the word goulash has come to embrace it over here. I know at least one Hungarian out there (hello Andras) who will probably find something horribly inauthentic about the casserole I’ve made here, but I think you’ll like it nonetheless.

To serve six (it’s worth making plenty – this is an easy recipe which freezes well), you’ll need:

Dust the meat with the flour and a generous seasoning of salt and pepper. Bring the olive oil or bacon fat to a high heat in a large, thick-bottomed pan, and brown the meat all over (you’ll probably need to do this in a few batches to avoid crowding the pan), removing the browned meat to a bowl.

Reduce the heat to a medium flame, and in the same pan, sauté the onions until they are translucent. Tip the paprika, tomato purée, sugar, garlic, bay and caraway seeds into the onions and continue to sauté for a minute. Return the meat and any juices to the pan.

Pour the wine over the contents of the pan, and using a wooden spoon, scrape away to deglaze any flavoursome brown bits that have stuck to the bottom. Pour over the stock, and bring to a simmer. Cover with a well-fitting lid and put the casserole in the oven for two hours. Check and stir occasionally, and top up with a little water if you think the stew is becoming too dry.

After the two hours are up, add the juice and zest of a lemon, and taste for seasoning. Set aside and heat up when you are ready to eat.

To make the nokedli, put the eggs, salt and water in a large bowl and use a hand whisk to beat the mixture thoroughly. Add the flour a couple of tablespoons at a time until it is all incorporated. You will have a thick, wet dough.

Bring a large pan of water to a rolling boil. If you have a spaetzle or nokedli maker, now’s the time to bring it out. If you don’t, don’t panic; just get a colander out, spoon a ladleful of the mixture into the bottom of the colander, and use the ladle to push the mixture through the colander straight into the boiling water. It will snake out of the colander’s holes in little pieces, which will swell as they hit the water. The colander process can take a fair amount of elbow grease (this is why you might want to buy yourself a nokedli maker), but I like to think I’m mindfully burning off calories in advance of eating far too much. Most of the calories that got burned off here belonged to the chivalrous Dr W, who was probably getting tired of the swearing coming from the kitchen, and took over after a few minutes.

The nokedli are ready as soon as they float to the top of the boiling water. Fish them out with a slotted spoon and keep them in a bowl in a warm place as you work your way through the mixture. You can serve the finished nokedli as they are, or warm them through in a knob of butter in a frying pan, without browning.

Serve the goulash over the nokedli, with a generous splodge of soured cream spooned on top. A sprinkling of oregano and parsley can give this dish a lovely lift, but you may well find you don’t need it.

16 Replies to “Beef goulash with nokedli”