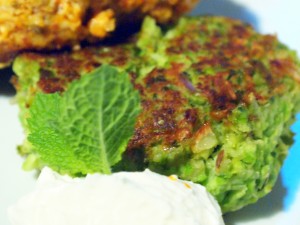 Falafel? Well, kind of, although I don’t think anyone from the Middle East, or anywhere else where they’re a staple, would necessarily agree with me. I threw this together after eating something advertised as a pea falafel wrap at Harvey Nichols cafe in Leeds last week. I felt the Harvey Nicks version could do with some work – it was underseasoned, underspiced and crying out for a squeeze of lemon and some mint, but had the makings of something really rather good, as I discovered after some experimentation with a bag of peas and some soybeans back home.

Frozen peas and edamame cooked like this make a very quick store-cupboard supper, and the results taste as if you’ve spent much, much longer on them than the few minutes these take to throw together. This is a great dish to whip out when you’ve been landed with an unexpected vegetarian guest (like my poor parents-in-law, who were told that the foreign students they were hosting a few weeks ago were Germany’s only veggies barely a day before they arrived), and a good burger substitute for vegetarian barbecue-goers. Lacto-ovo vegetarians who do it for moral reasons befuddle me. What do they think happens to the calves who were going to drink the milk, and the chickens who weren’t female enough to lay eggs? I can guarantee you that they’re not all prancing in the sun and nibbling on tender shoots, shepherded by the consciences of unimaginative veggies. Cue comments storm.

Anyway. These falafel make for a great side-dish, or a main event on their own. Stick them in a wrap, once they’ve cooled, for an easy and uncharacteristicly healthy lunch, if you have any left over.

Defrost the peas and beans, throw all the ingredients into the bowl of the food processor and pulse until you have a rough paste. Use your hands to bring the paste together into patties about the size of a burger.

In a non-stick pan, heat the olive oil until it shimmers and starts to give up its fragrance. Slide in the patties and cook for a couple of minutes per side, until golden on the outside. Serve with a big dollop of Greek yoghurt and some lemon to squeeze over.