The recession has hit hard in Ireland. For the country’s food businesses, it’s been a double-edged sword; some restaurants are now choosing to open seasonally, or for only part of the week, and you can’t help but notice the closed shops as you drive through the small towns. 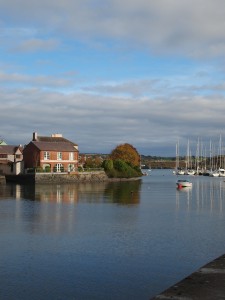 But closures aren’t the whole of the story. Markets and local producers are winning shoppers away from the supermarkets with some superb produce and giddily good pricing, while also weaning the restaurant business off reliance on wholesalers; most of the menus you’ll see are packed to the gills with meat, fish and vegetables sourced from only a few miles around. Innovation in food, from special Saturday pizza kitchens, to Irish-Indian spice blenders and microbreweries specialising in the kinds of real ale that knock Guinness into a cocked hat, are under every mossy stone you overturn – and they’re drawing in the punters. And best of all, you remember all that stuff you’ve heard about Ireland being an expensive place to visit? Not true any more. This is a perfect time to visit the island; you’ll holiday like a king, and while you’re doing it, you’ll be supporting an admirable local food economy which really deserves a few of your vacation Euros.

I was in Cork and Waterford for three nights as a guest of Tourism Ireland, who have done all the work for you if you fancy planning a gourmet trip to the country, with the very informative foodie bit of their website. The schedule they’d worked out with the brilliant Niamh from Eat Like A Girl had five food bloggers churning up the countryside in a minibus, speeding (I mean that literally; Paddy, our driver, was in a constant hurry to get back to his wife) from market to museum to butcher to cookery school to farm to…kayak in an exhaustive tour of what the two counties have to offer. I can heartily recommend kayaking through Cork’s two main city channels at sunset if you’re in the mood to burn off some of what you’ve eaten; Jim and Barry from Atlantic Sea Kayaking put even the most nervous of us at our ease – and nobody got wet.

If you’re in the country, it’s really worth your while making use of the refrigerator in your hotel room, packing a coolbag in your suitcase and shopping for some market produce while you’re there. Stand-outs which you can transport quite easily include the smoked fish, especially Frank Hederman’s exceptional product from the Bevelly Smokehouse. We bumped into Frank himself twice, once at the English Market in Cork, where Kay Harte from the Farmgate Café and restaurant took the time to give us a market tour, and once at the lovely little farmers’ market in Midleton. In the winter, try his buttery-smooth smoked mackerel; Frank says the fish don’t eat over the winter and stop producing stomach acid, which results in a much less acid flesh in the fish as a whole. However it’s done, I’ve never sampled a better smoked mackerel. If you can’t get to Cork, Frank also supplies Selfridges in London with his silky smoked salmon and some other smoked products.

Spiced beef is a Cork favourite. The shipping lanes which used to pass through Cork at the height of the British Empire (you can learn more about this at the city’s wonderful butter museum, where we saw a 1000-year-old chunk of bog butter preserved in a case) injected the city’s traditional cuisine with flavours not seen in the rest of the country. Paul Coughlan at the English Market is making spiced beef to his family’s old recipe, (“We use cinnamon, ginger, cloves, mace, pepper…and some secrets”) , brined in a wet spice mix, poached, then rolled in a dry mix. Thin slivers are terrific as a charcuterie with drinks; in Cork it’s very popular at Christmas, and again, it’ll travel well in your suitcase.

Local soda breads are available all over the country, from the very dark brown kind made with molasses to the pale golden kind, sometimes spiked with caraway seeds. There’s not as much in the way of yeasted artisanal bakery here as you might find in other countries, soda bread having such an important role in Irish food tradition, but we found some very good breads at the markets we visited, all the better for being made in small batches. And the sausages – we enjoyed some from Catherine O’Mahoney at the English Market, who is a third-generation butcher – along with black and white pudding for breakfast, are a local necessity. Braver souls should head for O’Reilly’s in the English Market to sample driheen, a very traditional beef-blood sausage flavoured with tansy. It’s traditionally served with tripe in a bechamel; O’Reilly’s is one of the last places in the country that still makes and sells what’s becoming a fast-vanishing local speciality. Driheen and tripe are also served at the Farmgate café in the market, which I’ll expand on in a later post.

We saw lots of soft farm cheeses; these won’t travel so well, but can make a lovely picnic if you’re foraging for lunch at a market. Desmond and Gabriel are two hard cheeses from the West Cork Natural Cheese Company, and are sold all over; they’ve a Parmesan-like tang to them, and are well worth bringing home with you. Most places selling the cheeses should let you try a nibble before you buy. I also stocked up with some spice mixes from Green Saffron, an Irish food success story who blend a dizzying array of spice mixtures, and a few packets of the house blends from the tiny Cork Coffee Roasters.

There was much more to the weekend’s gorging than you’ll want to read at one sitting, so I’ll follow this up later with a post touching on some of the restaurants we ate at, some of the cookery demonstrations we enjoyed, and some of the hotels we stayed in. Many thanks especially to Niamh “Eat Like A Girl” Shields, Sarah and Aoife from Tourism Ireland, and Denise “Wine Sleuth” Medrano, Ailbhe “Simply Splendiferous” Phelan and Signe “Scandilicious” Johansen for being among the best company I’ve ever had the pleasure to spend a weekend with. I’m off to fry up some white pudding.

8 Replies to “A weekend in Ireland”