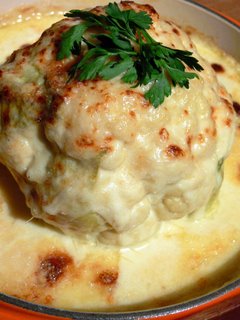 There’s something disproportionately impressive about wheeling a whole cauliflower out to the table, glistening in a robe of scented, cheesy sauce. It raises cauliflower cheese from a nursery tea dish to the sort of thing you might serve as a dinner party accompaniment.

I only ever make cauliflower cheese when I can find a pristine cauliflower. The cauli you choose should be firm and white, and still surrounded by its green leaves, which should be stiff, not floppy (floppy leaves mean the cauliflower has been out of the ground for too long). Don’t use a cauliflower with any bruised bits visible.

The Mornay sauce that’s slathered all over the cauliflower is a little more complicated than usual; the milk for the sauce is infused with aromatic herbs for a couple of hours before making the sauce up. It’s worth the tiny amount of extra effort. You’ll end up with a delicately scented, Parmesan-savoury cloud of white curds, a much finer dish than the wet stuff you remember from school.

To serve four as an accompaniment or two as a main course (if you’re eating this as a dish on its own, it’s very good with some toasted sourdough bread to mop up the lovely sauce) you’ll need:

A few hours before you start to eat, cut the shallot in half and stud it with the cloves. Place it in a saucepan with the bay leaves, parsley and peppercorns and pour over the milk. Bring the milk up to a gentle simmer, put the lid on and remove from the heat, leaving in a warm place for about three hours.

When you are ready to assemble the dish, use a sharp knife to remove all the outer leaves from the cauliflower except the very fine ones from the inner layer of leaves which curl around the curds. Cut the stalk off the bottom of the vegetable so it will sit flat when placed on a plate. Cut two big slashes in a cross shape into the bottom of the stalk – this will help the thickest part of the cauliflower to steam faster, so nothing will overcook and the whole vegetable retains a good texture. (Nothing is worse than a soggy cauliflower cheese.)

While the cauliflower is steaming, make up the Mornay sauce. Melt the butter in a heavy-based saucepan with the flour, and stir well over a low heat for three or four minutes – do not allow the roux (flour/butter mixture) to brown. Strain the milk and discard the aromatics. Add the milk to the pan very gradually, stirring all the time, until you have a thick white sauce. Stir the cheese, mustard and nutmeg through the sauce to finish. 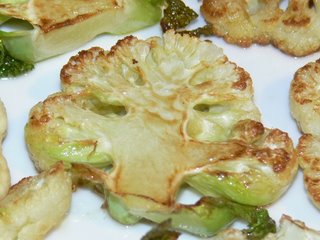 Ah, the cauliflowers of our youth. I’m sure you remember the buggers: grey and brain-ish, boiled until soft and claggy by the school dinnerladies; or (worse) bobbing up and down in salty water in your Grandma’s kitchen sink as a legion of little black insects died in unison and floated out of the florets. They never all vacated the cauliflower – I spent miserable hours at the table with the tip of a knife, digging out wiggly, squashy bodies and things with far too many legs, and smearing them on my napkin.

It took me some years to mentally rehabilitate the cauliflower, and I know plenty of adults who still won’t touch the things. Happily, these days you are very, very unlikely to come across an insect-riddled specimen (pesticides are the modern cook’s friend), and grey mush is easily avoided if you’re cooking them at home. Best of all, it turns out that a cauliflower which is roasted or sautéed is totally delicious. It has a great texture and takes on a sweet and toasty flavour a little like roast chestnuts – nothing at all like the bitter, wet stuff you remember from school. Serve as a side dish or as one of a selection of vegetably nibbles. And if you’re low-carbing, which at least two of my friends are at the moment, this is a very tasty way to get your vitamins without carbs.

To saute a head of cauliflower you’ll need:

(This may be the shortest ingredient list I have ever posted!)

Separate the cauliflower into large florets (see picture) and slice them lengthways so you have flat pieces of cauliflower about a centimetre thick. Heat the oil in the pan until it is shimmering, and slide the cauliflower in. Brown on one side (four or five minutes) before turning carefully and browning on the other side. Serve spread out on a large plate, sprinkled generously with sea salt.