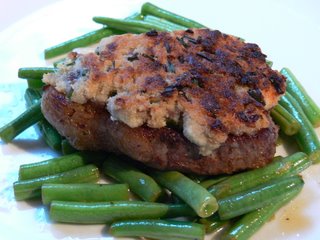 Sometimes, you might find yourself in possession of a less-than-handsome steak. Now, if your steak is richly marbled, fat and nicely aged, I wouldn’t recommend you do more than rub it with olive oil, salt and pepper – maybe a little garlic too – and grill it briefly. The pieces of topside I found myself with needed a bit more help, so I came up with this recipe.

I’ve been spending lots of time hanging out at the Polish deli in Newmarket recently – I’ve already told you about the salt pork and cherry juice, and I’m really enjoying the smoked sausages and pickled herring. I decided to sample some Polish horseradish (chrzan) after reading an extremely enthusiastic hymn to it in a book I was editing a few weeks ago, and found that if anything, the author wasn’t giving it all the love it deserves. English creamed horseradish can be a bit wet and insipid, but this Polish stuff is fiery, sweet and intensely fragrant – just sniffing the jar caused hallucinatory roast sirloins of beef to parade before my eyes. Look out for it in your local Polish deli – some supermarkets now have a Polish aisle too. You might also be able to find a variant called cwikla, which is horseradish with sweet red beets. It’s delicious, but it’ll make the crust here an alarming pink.

The crust on this steak is soft and light under its buttery, crisp surface, and is full of flavours which make the very best of your steak. To make enough to crust four steaks, you’ll need:

I also made some garlic-lemon green beans, which used the meat juices. If you want to make these too, you’ll need:

Get the steaks out of the fridge well before you want to cook them to allow them to come to room temperature. Rub them with olive oil, salt and pepper, and set them aside. While the steaks are coming up to temperature, prepare the crust.

Cut the onion into very fine dice, and fry over a low heat in two tablespoons of the butter, stirring regularly, until the onion is a lovely golden caramel colour. Put the cooked onion with its butter into a large mixing bowl, and melt the rest of the butter in the onion pan. While the butter is melting, use the back of a fork to blend the onion in the bowl with the cheese – try to distribute the cheese as evenly as you can. Stir through the horseradish, then stir the breadcrumbs into the mixture, adding the melted butter bit by bit until you have a mixture that is still loose, but that holds together when pressed. Stir the chives through the crust mixture, taste and season. (If your cheese is particularly salty, you may not need any extra salt.)

Cook the steaks for a minute per side in olive oil in a very hot frying pan – just enough to sear them on each side. Remove to a plate, keeping the oil in the pan. Divide the crust mixture into four and press it into the top of each steak. (If you find you have some left over, you can just make it into a little rectangle and grill it along with the steaks for a cook’s treat.) While you are working, some of the steak juices will come out of the steak onto the plate. Hold onto these for the beans, which cook very quickly, so you can do them as the crust grills.

Transfer the steaks with their topping to a grillpan and put under the grill for 6-8 minutes (or as long as you find your topping takes to go golden and crisp on top). Transfer to warm plates to rest for a few minutes before serving. I served this with some roast potatoes and more of that lovely horseradish.

To make the beans, warm the olive oil you seared the steaks in, and fry the garlic in it for a few seconds before tipping the topped, tailed and chopped beans in. Toss the beans around the pan until they start to turn bright green, then pour over the lemon juice mixed with the zest and the steak juices. Allow the liquid to bubble up and reduce a little, check the seasoning, then remove to a hot serving dish.