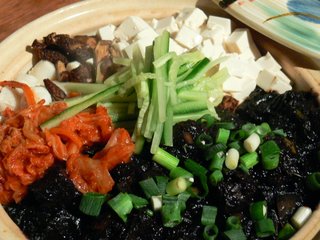 I hadn’t come across chunjang, a Korean black bean sauce, until January’s meal at the excellent Tanuki in Portland. In Korea, it’s actually considered a Chinese sauce, but it’s rather different from the saltier, stronger black bean sauces you’ll find in the Chinese supermarket – very dark in colour, mild and sweet alongside the soy saltiness, and altogether delicious.

Once chunjang is cooked, it’s called jajang (or fried sauce). It’s usually served over noodles with stir-fried pork. I found some at Wai Yee Hong, my favourite online oriental supermarket. When it arrived, I realised I had some scallops and a big chunk of belly pork in the freezer, a sack of sticky rice, a nice block of tofu in the cupboard and a jar of kimchee in the fridge – and a recipe for a hotpot suddenly sprung into in my head, fully formed. Cooking the pork for this takes a long time, but it’s actually very little work and is more than worth the extra effort for the incredible texture you finish up with.

Begin the day (or two days) before you want to eat by heating two or three tablespoons of oil in a large frying pan or wok over a high flame. Brown the slab of pork belly until it crackles on the skin side and changes colour on the bottom.

Move the pork to a saucepan that fits it closely, and pour over the quarter-bottle of Chinese rice wine. Add water until liquid covers the pork by about an inch. Bring to a gentle simmer on the hob, then put in an oven at 120°C (240°F) for six hours or overnight. Remove from the cooking liquid (you can freeze this stock to use later, because you won’t be using it in this recipe) and place the pork on a large plate. Put another plate on top and put the weights from your kitchen scale on the top plate to press the pork down, and chill for at least six hours. You can put the scallops in the fridge to defrost at this point too.

When the pork has been pressed and the scallops are defrosted, mix the scallops well in a bowl with the light soy sauce, a tablespoon of Chinese rice wine and the grated ginger, and set aside in the fridge. Pour boiling water over the dried shitake mushrooms to rehydrate them. Dice the tofu, chop the spring onions, and cut the cucumber into thin julienne strips.

Cut the pork into slices. Cook four tablespoons of chunjang in four tablespoons of oil (preferably groundnut, although a flavourless vegetable oil will be fine too) for five minutes over a medium flame. Much of the oil will be absorbed into the sauce. Add the chopped spring onions to the pan, reserving one of them for a garnish later, and stir-fry until they are soft. Add the pork to the pan with the chopped chillies and stir-fry until everything is mixed. Stir the cornflour into a quarter of a mug of cold water, and stir the cold mixture into the pork and black beans (now jajang, not chunjang, because you have cooked it) over the heat until the dish thickens. Remove from the heat and put to one side.

In a claypot or heavy saucepan, bring the rice and water to a brisk boil with the lid on, then turn the heat down very low. After 12 minutes, remove the lid and quickly spread out the black pork mixture over one half of the exposed surface of the rice. Spoon the raw, marinaded scallops and their marinade into the dish along with the sliced shitake mushrooms and the diced tofu, leaving a bit of space for the kimchee when the dish is finished. Sprinkle over five tablespoons of the soaking liquid from the mushrooms. Put the lid back on, and cook over the low heat for another 15 minutes until everything is piping hot.

The ingredients at the top of the dish will have steamed, and their savoury juices will have soaked deliciously into the rice. Add a few tablespoons of kimchee (I really like Hwa Nan Foods’ version, which comes in a jar to keep in the fridge), arrange the cucumber on top of the dish as in the picture, and scatter the reserved spring onion over the pork. Dig in. 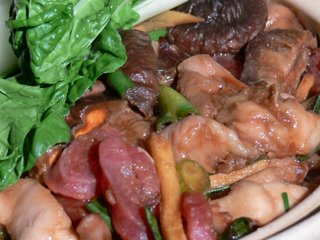