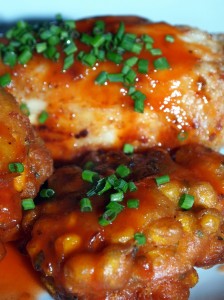 Everybody gets those days when happiness is not achievable without some fried chicken, and I wanted something horribly unhealthy to accompany it. Remembering fried chickens past, especially the ones I ate about a year ago at Lolo’s, a soul food restaurant in Phoenix, I decided that something with a sweet/savoury finish and a bit of spicing that would stand up to being drizzled with my own approximation of Lolo’s hot sauce was just what the chicken breasts I was cooking needed. The resulting fritters are crisp and puffy, and fall somewhere between an Indian pakora, a Thai fritter and a New Orleans beignet.

These are not not awfully good for you. Don’t make them too often. 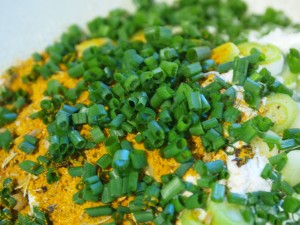 Beat the egg into the milk. Grind the spices in a mortar and pestle with the salt, and mix with the flour, baking powder, chives and finely chopped spring onions in a large bowl. Use a whisk to beat the egg and milk into the flour mixture until you have a batter. Use a spoon to stir the corn kernels through the batter.

Drop heaped tablespoons of the batter mixture into your deep fryer, and cook a couple of minutes on each side, until crisp and golden.

To make the sauce, just combine the honey and hot sauce in a small pan and bring to a simmer, stirring well as you go. Cool before slathering generously all over your chicken and fritters. You can rebottle any extra.