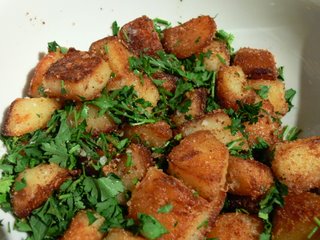 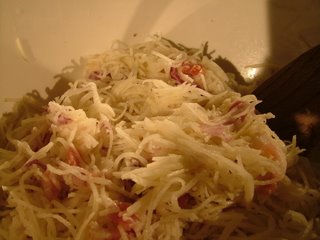 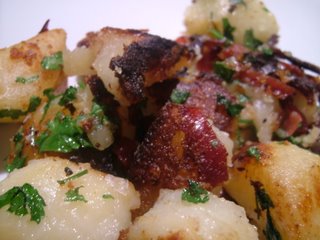 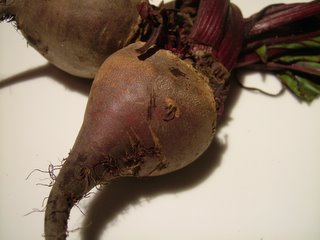 Outside it’s dismal. The garden is kitted out in a million shades of brown and dark grey. So how is it that vegetables at this time of year are so brightly coloured? Right now, I can buy fresh, dark red beetroot, bright orange butternut squash, and darkest green winter herbs like rosemary and sage. The vegetables in season at this time of year have an added benefit – they’re full of the sugars they’ve been saving up all year, so they are sweet and delicious.

Beetroot is a much maligned vegetable. Unsurprising, really; I can’t think of many things which benefit from being drowned in malt vinegar. We used to be served it at school, and God, it was revolting. The holiday in France when I was 9, where I was served a plate of crudites including some raw, grated beetroot, was a revelation. Beetroot in its natural state is sweet, juicy and earthy. If you’re only used to the pickled stuff and you see a bunch on sale raw, take it home and experiment with it. You may give yourself a delicious surprise. 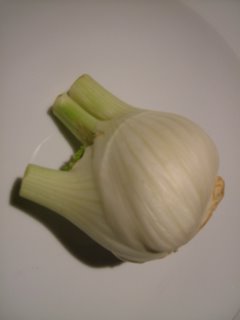 Whole bulbs of fennel are on sale at the moment as well. Sweet and fragrant, fennel cooks to a delectable crunch, and here, where it’s roasted in white wine and goose fat, it’s just beautiful. I’ve used sweet onions (Vidalia) – these onions are not as easy to come across in the UK as they are in America, but Sainsbury’s are carrying them at the moment with a recommendation that you use them in salads. They’re so full of sugar that they roast to a caramel perfection. I’m roasting a couple more onions in this than we’re likely to eat tonight – they’re excellent cold too. 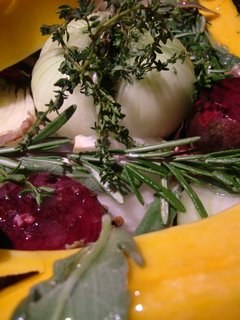 Wash the beetroot and cut the tops and bottoms off. Cut ends like this will allow the edges to catch and caramelise. Cut the squash into four lengthwise, and slice the fennel roughly (into about five pieces). Divide the garlic into cloves – don’t peel them.

Peel four of the onions and trim the roots and tips off, then push a knife through them so they are nearly quartered, but still held together at the bottom. Stuff each nearly-quartered onion with thyme, making sure there’s a good amount of salt sprinkled over the cut surfaces. Chop the rest roughly.

Put all of the vegetables into a baking tray with the anchovies on the bottom. The anchovies will not make the dish taste fishy, but they’ll give everything a rich, dark background flavour. Pour over the wine and drizzle with whole coriander seeds, maple syrup and goose fat. Strew the rosemary and the thyme over the top and put in the oven at 180°C for an hour and a half, or until the edges of all the vegetables are golden brown. 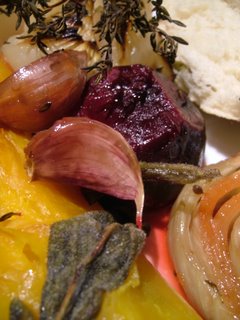 The wine and juices will have made an alarmingly pink sauce. Serve the vegetables with some crusty bread to mop up the liquid, and drink the rest of that bottle of wine.