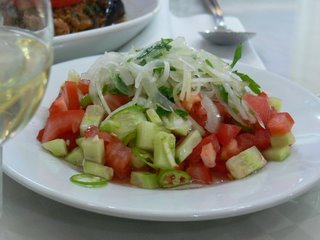 If you go to Istanbul expecting kebabs, meatballs and other chunks of protein, you might be pleased to find that there is also a rich tradition of salads, cooked vegetable dishes (especially aubergine) and dolmades, or stuffed vegetables. This simple salad pops up all over the place, and it’s a really good accompaniment for meat dishes – the fresh vegetables and tart lemon juice counter the wonderful oily richness of Turkish food like nothing else.

I made this last night, but the photo at the top of the page is of an identical salad I ate in a little restaurant next to the Bosphorus – unfortunately, I still don’t have my camera so couldn’t photograph last night’s version. Mine turned out pretty much exactly like the restaurant one, though: this is a very quick, very easy dish with half an hour’s thumb-twiddling in the middle.

Slice the onion very finely and chop the parsley roughly. Put them together in a bowl and squeeze over the juice of half a lemon and two tablespoons of olive oil. Set aside for thirty minutes before you put the rest of the dish together.

When the thirty minutes is up, dice the tomatoes and peel and dice the cucumber – the pieces of tomato and cucumber should be small and even. Slice the chilli into thin rings. Mix the chilli, tomatoes and cucumber together in your serving dish and dress with the remaining olive oil and a squeeze of lemon juice. Place the onion slices and parsley on top of the dish and pour over any oily juices from the bowl. Bring the salad to the table with the onion on top, then allow the diners to mix it up themselves.

I’ve just got back from Istanbul, where I spent several days gorging myself on kebabs, dates, grilled fish, honeycomb, morello cherry juice and other good things. I am currently too jetlagged to come up with any really sparkling prose, so this will mostly be a picture post from the city’s spice market, where about 100 small stalls in a covered bazaar sell everything from henna to sumac. It’s an essential shopping destination if you’re in the city and you’re at all interested in food. 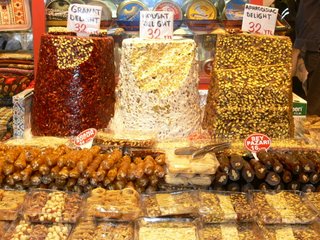 This stall was selling loukhoum (Turkish delight – here’s my recipe) and baclava, the tooth-hurtingly sweet pastries soaked in a sugar syrup that you might have had with coffee in Turkish or Greek restaurants. I did not sample the aphrodisiac delight on the right, but judging by the huge chunks that had obviously already been sold on the day I visited, some people must think it’s effective. Behind the blocks are tins of Iranian caviar. The caviar is also sold from blocks, sliced and then jarred. Nilgun, our excellent guide, suggested putting a dab of butter in the top of the jar to keep the caviar fresh. Raw spices, including several grades of flaked chilli and powdered paprika. I’d already tried some of the very dark chilli in the second row, sprinkled on a rotisserie chicken; we came away from the market with a little packet to use at home. At the left-hand side of the picture you can see almonds for sale, still in their shells; the dried roots at the front next to the bundles of cinnamon are turmeric and ginger. There’s more caviar in tins above the display, next to jars of pomegranate molasses. 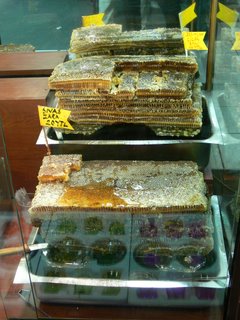 Raw honeycomb, kept behind glass to keep insects away. There was a big slab of this laid out every morning at our hotel breakfast; we squashed it with a fork to drive the honey out of the waxy comb, and then ate it with yoghurt, on croissants and on toast. 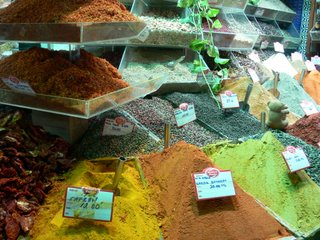 This stall was labelling several substances as saffron. None of the yellow/orange things on offer was real saffron; the powder at the front was turmeric, and the fat orange stamens on the plastic trays at the left (much fatter than the thread-like real thing) were safflower, which doesn’t taste of much and is used primarily in dyes. Caveat emptor. 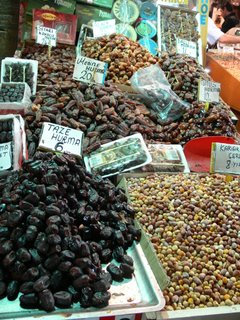 Four grades of dates, some prunes, and two grades of apricots. Most stalls selling dried fruit sold hunza apricots in their dark, untreated form alongside the bright orange ones (which are treated with sulphur dioxide to preserve their colour). If you find the less attractive brown ones, buy them; all the flavour and aroma of the fresh fruit is concentrated in them, and they’re much better than the orange ones. We sampled several grades of date, and there was method in the pricing; the expensive ones really were the best, with thin skins and a moist, fudgy interior – it was hard to believe that what you were eating was a fruit.

I’ve got some restaurant recommendations for you, some street food tips and some more market exploration coming up – watch this space.