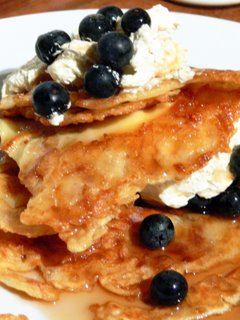 Tomorrow is Shrove Tuesday or Mardi Gras, which much of the world celebrates with colourful parades, loud music and women baring their boobs in return for beads. In the UK, we just eat pancakes.

I don’t hold with this giving-things-up-for-Lent business. Pancake Day is meant to be a way to use up all the good things in your larder before embarking on 40 days of mealy-mouthed asceticism. Having given up giving-things-up for Lent myself, I like to eat pancakes year-round, but if you’re one of those for whom this is a once-a-year treat, here’s a recipe for some lovely, lacy pancakes flavoured with orange flower water, which makes them light and delicately floral. In the picture above, I’ve stuffed them with whipped Chantilly cream (whip the cream as usual, but add a tablespoon of caster sugar and a few drops of vanilla essence to every pint) and blueberries, then drizzled them with maple syrup, but there are plenty of other simple fillings you can try:

To make about 12 pancakes, you’ll need:

Sieve the flour and salt into a bowl, and make a well in the middle. Break the eggs into the well and whisk with a balloon whisk, pouring the milk in gradually. Eventually, you should have a smooth batter about the same consistency as single cream. Stir the orange flower water into the batter. This batter doesn’t need to stand before you use it.

Heat about 1 tablespoon of shortening in a large pan over a high heat. The pan should be as hot as you can get it if you don’t want your first pancake to be a flabby disaster. Swirl about ⅓ of a ladle of the batter around the pan (adjust the amount for smaller pans). You should have not quite enough batter to make it to the edges of the pan if you want to have a lacy pancake with a delicate frilly, crisp edge. Flip the pancake over after about 45 seconds. I always use a spatula for this operation, having experienced a childhood pancake/ceiling incident – if you are brave and strong in the wrist, toss the pancake in the pan. Cook the raw side for another 45 seconds, and slide out onto a plate.

We usually eat these one by one as quickly as I can cook them, but if you want to make a great heap of pancakes and serve them all at once, you can wrap the pancakes in foil and keep them in a very low oven, although this does some violence to the lovely crisp edges. It’s best to eat them straight from the pan for the best texture.

British readers will notice that the baby vegetables they are able to buy at the moment are, for babies, somewhat husky. This is because EU legislation, which was only repealed last week and which will remain in force until July 2009, sets strict rules for the dimensions of vegetables – carrots may not be sold, even as baby carrots, if they weigh under 8g.

Legislation on the weight, symmetry, roundness, straightness, evenness and colour of vegetables in the EU has, in my experience, been roundly ignored by market sellers in France, Italy and Spain, while it’s prosecuted with zeal by UK council officials. (Meanwhile, amazingly, it was the French, Italians and Spanish who were in particular opposition to any change in legislation – I am at a total loss to understand how it comes to be the rigid old British and the Germans who are calling the situation as it is untenable.) It’s good to know that these protectionist rules, which used to result in the waste of around 20% of all farm produce, are being dumped as a result of the EU-wide rise in food costs, and I look forward to the appearance of spurred and bendy cucumbers in my local supermarket. Meanwhile, I wish they’d extend the repeal of these rules to all vegetables – even once next year’s changes come into force, it will still be illegal to sell imperfect apples and pears (note that a lot of old English varieties are rusty and spotty, and as such impossible to sell legally) unless you slap a label on them saying “product intended for processing”. Citrus fruit, kiwi fruit, lettuces, peaches and nectarines, pears, strawberries, sweet peppers, table grapes and tomatoes will also remain covered by the old legislation. I long for a funny-shaped tomato, or one of those lovely ripply peppers. The law in this area is a mess, protecting the interests of farmers while raising prices, putting financial pressure on householders and excluding us from choice and flavour. Sometimes I feel my best option might be to turn the back garden into an allotment.

Anyway. I seem to have gone off on a tangent. These glazed carrots and radishes are delicious, extremely easy to make, and not as bad for you as you might imagine. They’re a regular fixture on our table at Christmas, but they’re fantastic at any time of year. I have faked true baby Chantenay carrots here with the judicious trimming of pubescent-but-legal, 8-gram Chantenays. Until next year, you’ll have to do the same. Or emigrate.To serve two, you’ll need: 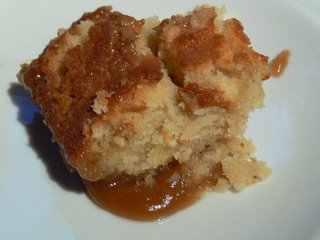 The chocolate puddle pudding I wrote about a few weeks ago went down so well that I felt duty-bound to make another self-saucing dessert for you to try at home. Pouding chomeur (French for poor man’s pudding) is a French Canadian dish, dating from an era when poor men could afford maple syrup. Maple syrup has been pretty pricey stuff for as long as I remember, and I suspect that this pudding was named when dinosaurs still roamed the Latin Quarter of Montreal.

You’ll be making an easy sponge, and pouring a maple syrup and cream sauce over it before putting it in the oven. The liquid magically swaps places with the sponge while the pudding is cooking, and you’ll end up with a lovely moist cake layer on top of a thick, syrupy, mellow and gloriously sweet sauce.

A warning – this is, by design, a very sweet dessert. I recommend cutting through the sweetness by sloshing cream over the warm cake before you eat it, or by having a glass of cold milk by your plate.

To make an amazingly sweet cake from the time of the dinosaurs, you’ll need:

Sauce
375 ml maple syrup (I used Grade A syrup, but Grade B will be great here too)
250 ml double cream
1 tablespoon cider vinegar
Pinch of salt

Bring the syrup, cream, vinegar and salt to the boil in a saucepan and immediately remove from the heat. Set aside.

Cream together the butter and sugar with an electric whisk in a large mixing bowl, until the mixture is pale and soft. Add the egg, vanilla extract, lemon zest and nutmeg to the bowl and beat in well with the whisk. Sieve the flour and baking powder in another bowl. Continue to whisk the creamed butter mixture on a medium to high speed, adding the milk and flour a tablespoon at a time until all the milk and flour are used up and the sponge mixture is light and fluffy.

Use a spatula to spread the sponge mixture in the bottom of a 20 cm square cake tin. Pour the sauce gently over the top. Don’t worry if it appears to disturb the sponge mixture – magic will happen as soon as you shut the oven door.

Put the cake tin on a middle shelf of the oven and bake for 45-50 minutes (it may take ten minutes or so longer – test the cake with a toothpick in the centre; if it comes out clean, the cake is done). Serve warm with an insulin drip.