This one’s for marzipan lovers. I love almonds and cherries, and there’s something undeniably Christmas-y about the combination. To kick the Christmas angle up a notch, I spent a while experimenting with marzipan, and I’ve worked out a method that makes marzipan pieces melt into the cookie dough in a gooey, puffy fashion.

I’ve used sweetened, dried sour cherries, which are now readily available in the baking sections of supermarkets in little metallised plastic packets. They’re a very different beast from glacé cherries, and retain a tart bite and juicy plumpness, which is a brilliant contrast to the sweet marzipan and sugary cookie dough. Ground almonds and egg whites give these a near-macaroon texture. They’re light and have a lovely crisp on the outside with a slightly gooey, squashy centre – absolutely irresistable.

The plan was to make 30 of these, to eat a couple for dessert, and spend the rest of the week eating a few a day so I could tell you how long they’ll last in an airtight box. Sadly, they turn out to be rather moreish, and I discover that as of this morning Dr Weasel and I have both been fishing surreptitiously in the box when we thought the other person wasn’t looking. There are only ten left. I think I need to get the exercise ball out before I start to resemble it. 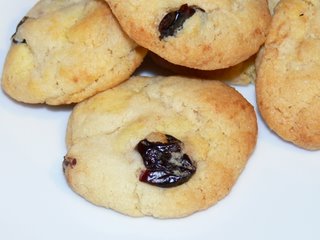 Mix the ground almonds, flour and baking powder in a large bowl, and chop the marzipan into tiny cubes (about half a centimetre on each side). Mix the marzipan with the dry ingredients carefully, so each little cube is coated and separate, and set the bowl aside.

In another bowl, cream the softened butter and sugar together with an electric whisk in another bowl. Add the egg white and almond extract and keep at it with the whisk until the mixture is pale and fluffy. Use a wooden spoon to stir the flour and marzipan mixture into the butter mixture with the cherries.

At first the mixture will look as if it won’t form a dough, but if you keep at it you’ll find it will eventually come together smoothly (in part thanks to the oils in the marzipan and ground almonds). Bring the dough together into a ball with your hands and put it in a freezer bag, seal and leave in the fridge overnight.

When you are ready to bake the cookies, preheat the oven to 180°C (350°F). Take the dough out of the fridge and make neat balls of about an inch in diameter between your palms, ensuring that every ball has at least a couple of cherries in it. Arrange the balls on grease-proof paper on baking sheets with a gap of 2 inches between each one, and bake for about 25-30 minutes until the cookies are turning golden (see photograph). Remove from the oven and leave to cool on the baking sheets until the cookies start to firm (about five minutes). Use a spatula to move them onto racks to finish cooling. 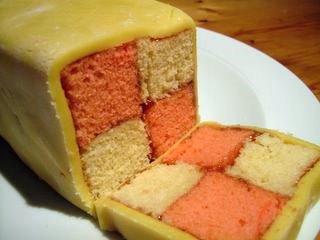 If you wish to demonstrate effortless cake superiority to your friends, nothing will do the job better than this showboat of a cake. (Fellow pedants may point at the title of this post and tell me off; you’re right, it is also spelled ‘Battenberg’, but ‘Battenburg’ gets more hits on Google, and a lot of people get to this blog through Google searches. Yes, I’m pimping for hits.)

Battenberg is the spelling which is, in fact, correct; the cake is named for the (originally German) family who made up part of the British royal family, and eventually renamed themselves Mountbatten in World War I to distance themselves from Germany. It’s not clear who first came up with it, but they must have been pleased with themselves; it looks impressive and tastes fabulous, if you’re one of those sensible people who likes marzipan. If you’re not, go and cook last week’s cake instead. 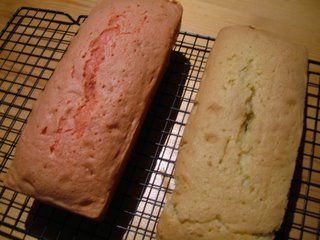 Mary Berry beats the butter, sugar, eggs, ground rice, flour, baking powder and almond essence for two minutes until smooth, adds the colouring to on half and then cooks the two halves in the same low, wide tin. I’ve tried this before, and it’s almost impossible to get a reasonably neat line at the colour boundary, so I now use two separate loaf tins, which means you have to cook the cake a little longer than the 40 minutes she suggests (try 50 minutes and test with a skewer). One reasonably foolproof way to tell whether your cake is done is Mr Weasel’s Aural Method, where you get close to the cake and have a listen. An underdone cake will be making tiny, fizzy, popping noises. A cake which is cooked properly doesn’t pop or fizz. 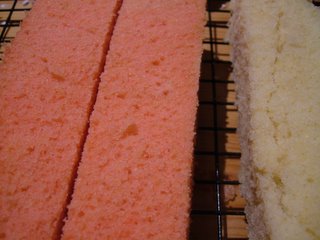 Don’t turn the cakes out until they have had some time to cool, or they will be crumbly. (I was a little too eager with the white half, which, as you can see from the picture, is – well – crumbly. It’s not the end of the world; you can glue any dreadful errors back on with jam. This cake is more forgiving than it looks.) Trim each of the two cakes into two cuboids, each with the same square cross-section, so that you can put them all together later. (Can you tell I’ve been working on editing some secondary school maths materials?) Warm your jam (if, like mine, it is a jam with pips, strain it after warming) in a saucepan until it is runny and spreadable, and assemble the cake in the traditional chequerboard pattern. 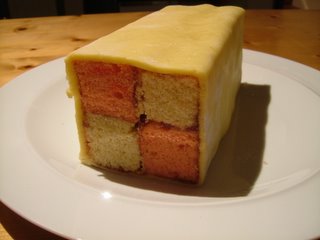 Roll the marzipan into an oblong big enough to wrap the cake in. Slather some more jam on the now glued-together cake, and roll it all up in the marzipan, smoothing the join. Make criss-cross patterns on the top with a butter knife. It may not be quite as unnaturally regular as Mr Kipling’s version, but it’s just as unnaturally pink, even more unnaturally delicious, and will make your friends make the kind of unnatural noises they usually reserve for firework displays.