I don’t know what makes me sadder in this article – the behaviour of the animal rights terrorists or the final capitulation of the restaurant. Members of an animal rights group threw bricks through the windows at Midsummer House, attacked their conservatory with glass-etching fluid, used paint stripper on the doors and spray-painted the building with slogans in protest at the restaurant’s use of foie gras. Chef Daniel Clifford has, after consultation with police, reluctantly responded by taking foie gras off the menu. Yet another let-down for diners in Cambridge, in a week which has also seen Bruno’s Brasserie announce its closure.

I bang on at length about foie gras here. It’s delicious, it’s been around since the ancient Egyptians, and it is not necessarily a cruel product. I recommend a trip to any of the small farms in the Dordogne which practise gavage, or force-feeding, if you are worried or curious about the animal welfare issue. I visited such a farm a few years before I started Gastronomy Domine, and saw happy, fat birds who often line up to be fed at mealtimes. Prices for the terroir-raised French stuff are much higher than those for the mass-produced Chinese product, which I do have reservations about: reservations which stop me from buying cheap foie gras. I’m perfectly happy to eat it and serve it to my friends otherwise; foie gras is a tremendous delicacy.

A quick Google (I’m not doing these guys the favour of linking to their site) for the people responsible for the awful vandalism at Midsummer House reveals a horrible level of sophistry (their basic conceit is that the fatty liver is a diseased liver, and that therefore Midsummer House is selling diseased meat) and a pretty transparent credo – they’ve got several banners up saying “Ban foie gras! Go veggie!” Violent, militant vegetarians are a group that have always bemused me utterly. It’s all very well softly denying your canine teeth exist and lovingly stroking a chicken, but when you do this at the same time as buzzing a brick through a restaurant window at 7pm, you’ve got a problem.

They’re denying the little person on the reading side of the menu a choice. If enough people are buying foie gras in shops and eating it in restaurants to make it a commercially viable product in this country (which it is; Selfridges have stopped selling it because of the animal terrorist threat, but you’ll still find it in the food halls at Fortnums and Harrods, as well as at a myriad smaller delis and, of course, on a bazillion restaurant tables), then this looks a lot to me like those diners have weighed the moral case and come out on the side of a nice, juicy foie. For god’s sake – you can buy the stuff at Costco, which suggests to me that the demand is out there. It’s Midsummer House’s great tragedy that the restaurant’s charming position, off the roads, in the middle of an approximately unpoliceable common, make it a much easier target for criminals wanting to make a violent point. Commiserations to Midsummer House, and I hope that foie gras makes its way quietly back onto the menu when the fuss has died down.

If you know anything about the attack on Midsummer House, which the staff discovered on Sunday morning, you can contact police on 0845 456 4564 or call Crimestoppers, anonymously, on 0800 555 111. 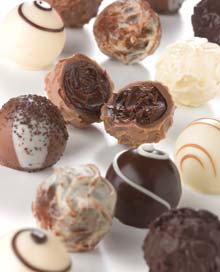 One of Gastronomy Domine’s friends over at Hotel Chocolat sent me a link to a news story yesterday. It appears the head chocolatier from Thornton’s (another UK chocolate shop – I like their chocolates much less than Hotel Chocolat’s, but Thornton’s does carry a very good diabetic range which has the added bonus of using sweeteners which induce explosive diarrhoea in the greedy) walked into a Hotel Chocolat shop and used a vindictive thumb to crush the creamy life out of £63.50-worth of truffles. His motives are, thus far, unknown. Perhaps, like me, he didn’t like the Marc de Champagne ones.

He’s since left his job. A shame; I’ve seldom heard a phrase so delightful as Hotel Chocolat’s “This was a extraordinary act of truffle-squishing”.