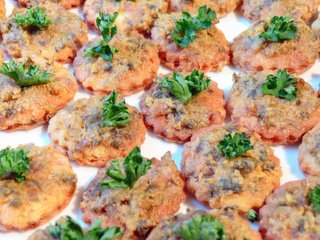 If you’ve been following me on Twitter, you may have noticed a few references to Edwardian savouries and a writer called Ambrose Heath this week. The savoury used to be a course served at the end of a formal English meal. Salty, umami and often highly spiced, the savoury was packed in by English gentlemen after dessert while they discussed hats and feudalism. A salty nibble was meant to cleanse the palate of whatever gelatinous pudding you’d just eaten so you could happily assault it with a cigar and too much port.

The savoury didn’t survive the period of rationing during and after the Second World War (a period which rendered English food completely joyless – it’s only started to recover recently). A grave shame, especially for those, like me, who lack a particularly sweet tooth; I’d far sooner eat a bacon sarnie than an ice-cream. Recipes for savouries are, these days, pretty hard to find, but I have several in a pre-war book by Andre Simon, and I couldn’t believe my luck when I found a copy of Ambrose Heath’s Good Savouries in a second-hand book shop last week. 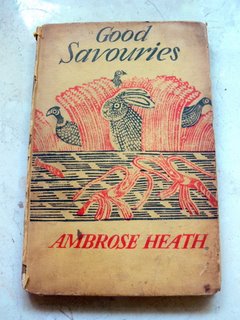 Ambrose Heath was a prolific food writer: there are more than 70 books to his name. One of the first cookery books I owned was his book on sauces, which, along with his other books, appeals to the systematising, cataloguing part of my soul that lives somewhere on the autistic spectrum. His books are exhaustive and meticulous treatments of their subjects – there are multiple recipes with tiny tweaks for many of the dishes, alternative approaches and ingredient substitutions, and a lovely sense of a rather plump, happy man behind the pen. (And isn’t that a gorgeous cover illustration?)

Most of the savouries in this book are based around salty ingredients like ham, bacon, anchovy or bloaters; they’re usually spiced vigorously with curry powder or chutney, and are presented sitting on a fried crisp of bread, a puff of pastry or a hollowed roll buttered and baked crisp. This recipe for anchovy biscuits reads as follows: 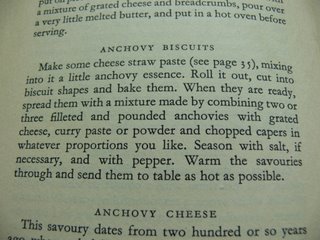 To make the pastry for the cheese straws, Heath says you’ll need:

His recipe will have you rubbing the butter into the flour/parmesan/mustard mixture, binding with the egg yolk and a little water, then baking for ten minutes. I changed the method a little, freezing the butter for 15 minutes and shredding it on the coarse side of the grater into the flour/parmesan mixture (to which I’d added a teaspoon of Madras curry powder), stirring everything together with a knife and binding the resulting mixture with the egg yolk and some ice-cold water mixed with four anchovies pounded in the mortar and pestle. I rested the pastry in the fridge for half an hour before rolling it out very thinly, cutting out 48 rounds with my smallest cookie cutter, and baking at 200°C for 12 minutes until golden. Rub the mixture in if you prefer, but grating in hard butter will give you a puffier, crisper result. I left out salt and pepper – the anchovies and curry powder will provide all the salt and spice you need.

To make the paste to spread on top of the biscuits, I pounded four more anchovy fillets, 1 teaspoon of curry powder (Madras again – Bolsts is my favourite curry powder, but you should use your favourite brand/ferocity), 2 tablespoons of parmesan, 1 tablespoon of chopped capers (in wine vinegar, not salt, which would just be too much with the anchovies), 1 tablespoon of oil from the anchovies and 1 teaspoon of smooth Dijon mustard in the mortar and pestle until smooth. This will give you enough to smear each biscuit with the tip of a knife – look to use a very tiny amount of the topping, which is strong and salty. If you are familiar with Marmite or Vegemite, you need to spread in about the proportions you would spread those on toast. Allow the biscuits to cool before spreading them or they will be too fragile to work with.

Pop the biscuits in an oven heated to 180°C for five minutes. The spread will go slightly puffy. Dress with a little parsley before serving warm. Rather than eating your anchovy biscuits at the end of a meal, I’d suggest you use them as nibbles with drinks – a very dry Fino sherry or a Dirty Martini will work beautifully against them. 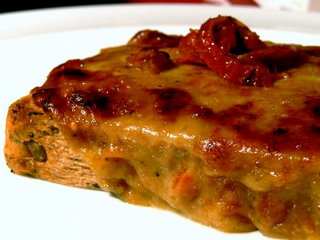