This is similar to a lot of Chinese claypot dishes, and is really worth rolling out on a day when you have guests you want to spend time talking to rather than cooking for. It’s very, very tasty indeed, but it only uses one dish (or a rice cooker, if you happen to have one in the house) and doesn’t require any advance preparation or marinading. You’ll be using the food processor to blitz some chicken thighs into something a bit like a try rough chicken mince. Be careful when blitzing – you want small pieces of chicken, which steam to a really tasty, juicy result, rather than a smooth paste, which steams to a rubbery horribleness. The rice absorbs juices from the chicken along with all its seasoning, making for a really savoury dish.

I’ve been really pleased to see so many oriental ingredients make their way into even some of our…slightly rubbisher supermarkets. I found a jar of bamboo shoots in sesame oil when on an emergency tonic water run to Tesco. They’re great, and if you can track them down they’re well worth using, but if you can’t find them, substitute with canned shoots, rinsed well under the tap. All the other ingredients should be easy for you to get your hands on.

Texture’s a really important part of this dish. If you’re lucky, you’ll get a tasty crust at the bottom of the rice, created by the fat from the stock and the sesame oil which drips to the bottom “frying” the rice at the base of the dish. (Be sparing with the stock when you come to add the chicken mixture to increase the chances of a good crust.) The chicken will be soft from the steaming, and the vegetables, with their lower water content, will cook rather more slowly than the chicken surrounding them, leaving a lovely fresh crunch to things. As ever, use a home-made chicken stock if you have some in the freezer. If you don’t, I’ve had great success recently with the stuff Waitrose have been producing since their partnership with Heston Blumenthal, which is made with some kombu (a Japanese sea vegetable) for an extra umami kick.

To serve two (just multiply the amounts for more people and add an extra 5-10 minutes’ steaming time when you add the chicken for each extra portion) you’ll need:

Choose a Chinese claypot or a heavy saucepan with a close-fitting lid to cook the dish in. (You can also use a rice cooker – see below.) Combine the rice and 750ml of the stock in the pan with two of the spring onions, left whole, and one of the thumbs of ginger, peeled and sliced into coins. Put the lid on and bring the pan to the boil over a medium heat. Turn the heat down low and steam the rice for 20 minutes while you prepare the chicken.

While the rice is cooking, put the chicken thighs in the bowl of your food processor, and pulse gently and briefly until the chicken is chopped finely. Put the chicken pieces in a mixing bowl. Peel and dice the remaining ginger, mince the garlic and chop the rest of the spring onions and the broccoli into little pieces. Throw them in with the chicken, add the bamboo shoots, sesame oil, chilli oil, oyster sauce, rice wine and soy sauce, and use your hands to make sure everything is well combined. (I know, you hate touching raw chicken. Use a spoon if you must, but make sure everything is really well mixed.)

When the rice is ready, it’ll have little holes in the flat surface. Spoon the chicken mixture on top of it, pour over the remaining 25ml of stock, and stick the lid back on. Steam over the low heat the rice cooked at for another 25 minutes, and serve.

If you plan on cooking this in a rice cooker, just cook the rice with the stock, ginger and spring onions under the normal white rice setting, then set it to steam for the required amount of time. If your cooker doesn’t have a steam setting, just set it to “keep warm” when you’ve added the other ingredients, which should provide enough heat to steam the topping, but may take a little longer. 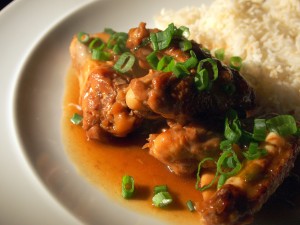 My Dad always taught us that the best part of the chicken was the wings. The flesh in the wing is sweet from its proximity to the bone, delicate, and lubricated with plenty of flavour-carrying fat from the skin that covers it. Accordingly, we used to fight over the wings every time a chicken appeared on the dinner table, occasionally with our cutlery. Ours was a savage household.

Dad’s Chinese, and this is the kind of comfort food he used to rustle up for us when everybody else’s Dad was frying mince with baked beans. I used to take great pride as a little girl in helping out – slicing the garlic, chopping the ginger, carefully mixing the cornflour into some cold water, and watching, fascinated, as he whirled around the kitchen with a wok and a pair of chopsticks. You can’t beat the cosmopolitan nature of the food education my brother and I got from my parents: Mum’s wonderful meals were from Jane Grigson, the Roux brothers and Elizabeth David, and Dad’s all did something fabulous with soy sauce. Alongside lengthy gastronomic holidays in France, where my brother and I were expected to sit quietly for hours in restaurants with endless cutlery and a million cheeses while Mum and Dad bibbed and tucked (and we did – there’s still little I find as fascinating as my very own slab of foie gras), there were the frequent visits to Malaysia, where food is as important to the national psyche as football is in Britain. Back in the UK, there were regular and keenly looked forward to family trips to London’s Chinatown, which, at the time, was the only place you could find ingredients like sesame oil, chilli sauces and tofu – even ginger was sometimes hard to find in 1970s Bedfordshire. There were bribes of candied winter melon and sesame caramels for the kids, and Dad swiftly made friends with all the local Chinese restaurateurs. We met Kenneth Lo once at a garden party when I was about six. Dad didn’t stop talking about it for weeks.

While most wing recipes you’ll find will have you grill or fry the wings so they are crisp, this Chinese method will have you simmering them in an aromatic, savoury sauce. You’re best off eating these with a knife and fork; fingers will be a bit messy. The popularity of chicken breasts and legs, all neatly pre-jointed, means that there are a lot of surplus wings kicking around out there, and you’ll likely find that you can buy them very cheaply (I prefer the butcher’s wings to the boxes from the supermarket, because I’m more confident about their origin) – this is a good budget dish for the end of the month.

I like to remove the wingtips, which don’t yield any meat, with a pair of poultry shears, and use them to make stock. This isn’t absolutely necessary – if you’re in a hurry, leave yours on. And although my Dad would use a wok to make this, I find a large casserole dish a bit easier, not least because it’s an even depth and comes with a lid.

Half an hour before you start to cook, sprinkle the salt, pepper and sugar over the chicken wings, mix well, and set aside.

Heat a couple of spoonsful of oil in your pan, and brown the wings on each side. You may need to do this in a few batches, depending on the size of your pan. When they are browned, return them to the pan with the chopped garlic, the ginger, cut into coins, and the white part of the spring onions. Keep stirring carefully for a minute until the garlic, ginger and onions start to give up their aroma – be careful not to break the skin on any of the wings.

Pour over the sesame oil and soy sauce, and reduce the heat to a low flame. Add water to cover the wings, stir to combine everything, and bring slowly to a simmer. Put a lid on the pan and cook, stirring occasionally, for 12 minutes.

Combine the cornflour with a little cold water. Remove the lid and stir the cornflour mixture through the dish. Continue to simmer until the sauce thickens. Stir through the green part of the spring onions, reserving a little to scatter over the finished dish, and serve with steamed rice and a stir-fried vegetable.