There’s a reason you don’t see souffles on blogs very often. It’s not because they’re particularly difficult or prone to failure (to be honest, I find making a souffle much less of a faff than making a quiche). It’s because unless you’re making a reinforced, twice-cooked, single-portion sort of souffle, centimetres of gorgeous puffiness will subside between your getting the thing out of the oven and focussing the camera on it. Move fast with a souffle, and for maximum impressiveness, make sure everybody in the house is clustered around the oven when you take it out so they can do the “Ooo!” thing in the three seconds before it starts to deflate gently.

It will only lose a few centimetres’ height, but I wish I’d got a picture in a bit earlier. It looked fabulous on exiting the oven, rather than merely very fine indeed, as it does in the photo above. And, of course, it makes for a particularly fine supper, light in texture and dense in flavour all at once. A lovely springtime dish.

To serve 2-3 with a sharp salad and some good bread, you’ll need:

Preheat the oven to 190ºC (375ºF). Put the haddock (undyed, if you can find it – I couldn’t) in a small dish, and cover it with the milk. Put the dish, uncovered, in the oven for ten minutes until the fish is cooked lightly. Strain the milk into a jug, remove the skin from the haddock and use your fingers to flake the flesh, removing any bones as you go, and set aside. Grease the inside of a 2l souffle dish very generously, and sprinkle generously inside with grated Parmesan, rolling the bowl around to make sure the cheese sticks all over its inner surface. Separate the eggs, the whites in a large, very clean mixing bowl (any grease on your whisk or in your bowl will affect the lift you can get into your eggs), the yolks in a mug or small bowl.

Combine 50g butter with the flour in a saucepan, and melt them together into a roux. Make a white sauce by beating in the flavoured milk a little at a time over a low flame. Add the creme fraiche, mustard, 50g Parmesan, herbs and flaked haddock to the sauce with the separated yolks. Stir well to combine.

In your large, squeaky-clean bowl, use an electric whisk to beat the whites into glossy peaks. You’ll know when you’re there; tip the bowl. If the eggs are not whisked enough, they will move when the bowl moves.

Use a large metal spoon to add a spoonful of the whisked whites to the haddock mix in the sauce pan to loosen the mixture. Stir well. Now add a spoonful of the loosened sauce to the egg whites, folding it in with the edge of the spoon rather than stirring; you want to end up with as much air still in those whites as possible. Repeat, spoon by spoon, until all the haddock base is folded into the egg whites.

Pour the mixture into the greased and cheese-scattered souffle dish. Sprinkle the top with a little more Parmesan. Slide into the oven and cook for 35 minutes, until puffy, golden on top and a little creamy inside. 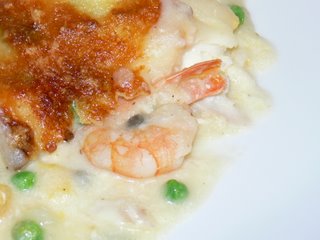 They tell me it’s brain food. I remain unconvinced – I am absolutely no better at doing sums than I was before I cooked this, but I am deliciously full and thinking hard about marine biology.

This is a lovely take on fisherman’s pie, a thousand miles away from any variant you may have eaten in the school dining hall. Some of the fish is fresh, some smoked, and this gives it a deep, warm background without overdoing the smoky flavour. Sweet peas and prawns are balanced by a hit of lemon juice and nutmeg, and creamy mash makes a golden lid for the whole thing.

Although this is a fish dish, you’ll find it keeps well overnight in the fridge. This amount made two filling suppers for two greedy people with a sharply dressed green salad. I used frozen haddock fillets here, but you can use any firm, flaky white fish, frozen or fresh.

Lay the haddock (defrosted if frozen) and smoked haddock in the baking dish you plan to make the pie in – it should have a capacity of between 1.5 and 2 litres. Pour over half the milk and dot with 25g of butter. Season with plenty of pepper and bake for 20 minutes. Pour the liquid from the baking dish into a measuring jug, top up with the remaining milk and reserve. Remove any skin or bones from the cooked fish and flake it into large pieces in the baking dish.

Hard-boil the eggs, and quarter them. Combine them in the baking dish with the flaked fish, drained capers, the frozen peas, the prawns (raw or cooked, but defrosted if frozen) and the smoked salmon. (I used Waitrose’s flakes of hot-smoked salmon – if you can’t find hot-smoked salmon use the regular variety and use scissors to cut it into bite-sized pieces.)

Peel the potatoes and set them to boil as usual for the mashed potato topping. While the potatoes are boiling, melt 75g of the butter in a saucepan. Stir in the flour and cook over a medium-low flame, stirring, for four minutes. Add the milk and fish cooking liquid a little at a time, stirring well after every addition until the sauce thickens. Continue until all the milk mixture is incorporated, and bring to a low simmer until the sauce thickens again. Season to taste with salt and pepper, and stir in the lemon juice and a grating of nutmeg. Pour the sauce over the ingredients in the baking dish.

Mash the potatoes well with the cream, 50g of the butter, another generous grating of nutmeg and plenty of salt and pepper. Spread or pipe the potatoes over the ingredients in the baking dish, and sprinkle with Cheddar cheese.

Bake for 40 minutes, until the cheesy top is a golden brown.