Apologies for the 24-hour disappearance of this blog yesterday and today. I’ve been experiencing increasingly bad problems with Blogger, and am looking at moving to another publisher. Unfortunately, as Gastronomy Domine is published via ftp and doesn’t live on the blogspot.com server, any changeover is made rather fiddlier than I’m happy dealing with – do any readers have any experience or suggestions?

Anyway – on with the food. 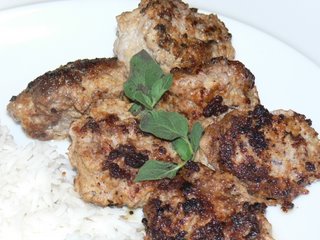 Here’s a final recipe for your smorgasbord, to go with the Janssons frestelse, the cucumber salad and some gravadlax with dill-mustard sauce. (I may have a post in a couple of weeks on curing your own salmon – currently, though, the fridge is full to bursting, so I ended up buying some pre-cured gravadlax from the supermarket…and very nice it was too.) These meatballs, thanks to a generous (and typically Swedish) amount of cream and milk soaking the breadcrumbs, are deliciously soft and moist. I prefer not to deep fry them (saving on the washing up), but the soft texture does mean that when pan-fried, you are likely to end up with a meatpolyhedron rather than a meatball. Never mind. They still taste lovely.

Because I was serving these with the Janssons frestelse, which has a creamy sauce of its own, I didn’t make a sauce to accompany these meatballs. If you’d like a sauce, just stir a small pot of soured cream and a little salt and pepper into the crusty, meaty, buttery bits left in the frying pan until bubbling, and pour over the meatballs. This is not a particularly beautiful sauce, but it’s exceptionally tasty.

A note on ingredients. I’ve used a mixture of meats here -half pork, and half veal. These days it’s becoming easier to find veal that’s been raised ethically (i.e. not in a crate), but if you are still uncomfortable with it, feel free to substitute the veal with beef.

To make about thirty meatballs for a smorgasboard (if you want less, the cooked meatballs freeze very successfully, or you can just reduce the quantites), you’ll need:

Mix the breadcrumbs, cream and milk in a small bowl and leave for twenty minutes for the crumbs to absorb the liquid. Use your hands to mix the crumbs, meat, eggs, seasonings and onion together, and divide the mixture into meatballs, shaping by rolling between your palms.

Melt some butter until sizzling in a large frying pan and add the meatballs in batches, being sure not to crowd the pan. Cook for ten minutes, turning regularly, until the meatballs are golden brown and becoming crusty. 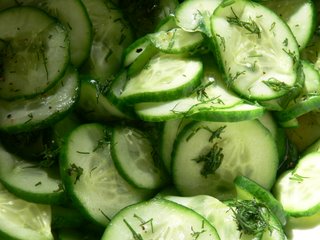 Here’s another Swedish recipe for your smorgasbord. This salad is right up there with my favourite cucumber applications: it’s sweet and tart, and spiked with aromatic dill and plenty of black pepper. This is a fat-free salad, and its clean and crisp taste makes it an excellent side dish where you’re serving up oily foods. It works especially well, for some reason, with fish; this is just fantastic with salmon. If you want to serve up some smoked salmon (or, more appropriately, gravadlax) with your smorgasbord, make the dill sauce here on Gastronomy Domine, which tastes authentically Scandinavian and goes extremely well with these dilly cucumbers.

I’m enjoying cucumbers a lot at the moment, largely because my Mum has been growing some real corkers in her greenhouse. They’re smaller than the kind you buy at the supermarket, but are extremely sweet and with a good flavour. If you too are in a particularly cucumberish mood right now, have a quick look at my recipe for Chinese smacked cucumbers.

To make a Swedish cucumber salad to serve six to eight as part of a smorgasbord you’ll need:

Slice your cucumbers thinly and arrange in a colander, sprinkling with the salt as you go. Put a bowl on top of the sliced, salted cucumbers and weigh it down with the set of weights from your kitchen scales (a heavy book will do the job too if your scales are digital). Salting and pressing the cucumbers like this will drive out some of their moisture, leaving them much crisper, and better able to take up the flavours of the dressing. Leave the weighted colander for an hour (keep it on the draining board so the drips can fall into the sink). Remove the cucumber pieces to a large bowl, chill for an hour and pour off any extra liquid they might have produced.

To make the dressing, dissolve the caster sugar in the boiling water, then add the vinegar, shallot and dill. Mix well, leave to cool (I give mine a quick shock in the freezer) and pour over the chilled cucumber. Serve immediately.

I’m very fond of cucumber salads, and there are several on this blog – click here for a few more. 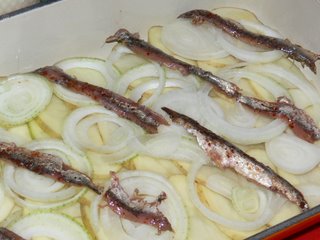 I’ve three Swedish recipes coming up over the next few days, since I’m pretty sure you’re getting sick of my endless riffing on Malaysian and Chinese things-with-rice. I’ve a soft spot for Scandinavian cuisine, which makes a lovely, hearty change when the weather starts to turn towards autumn. Swedish food is characterised by its use of dairy products, fish of all kinds, large game meats like reindeer, and preserved foods. You’ll find relatively few vegetables in Scandinavian cookery; the long winters preclude much that is green and leafy.

This potato dish, flavoured with onions and anchovy (which ends up surprisingly mild and creamy), is a traditional part of the Swedish smorgasbord, a buffet where cold and hot foods are served up in several courses. I was lucky enough to try an authentic smorgasbord in a manor house in rural Lincolnshire (I’ve lived, I tell you) when I was a teenager. The place was run by a Swedish couple, and offered a glorious and fresh spread of cold, cured or smoked fish (no lutefisk as I recall, but if you’re putting your own together, lutefisk would be very appropriate) as an opener. Sliced meats, cheese and a cucumber salad came next, followed by a third, hot course of those ubiquitous meatballs, stewed red cabbage, a venison casserole and a lovely, savoury gratin – Janssons frestelse. The restaurant is long gone now, but visits I’ve made later to Scandinavia have confirmed that what we ate that night was authentic and very well prepared. (The dish pops up in other countries in the region; I’ve eaten it as Janssonin kiusaus in Finland, and very good it was too.)

Although English recipes tend to use anchovies, spiced and preserved sprats (ansjovis in Swedish – you can see where the confusion came about) are usually used in this dish in Sweden. You can’t find these fat, oily little preserved fish for love or money in the UK, so a really good preserved anchovy is your best bet. Sainsbury’s do some absolutely glorious (and rather expensive) large anchovies preserved in oil with chillies in their world food section. These anchovies are very mild (you can eat them unaccompanied with your fingers, and they’re not too salty, just very, very tasty), and work very well here. Otherwise, any good French brand will do. It’s important that your anchovies are good quality ones, which will tend to have a softer, less fierce flavour – I know anchovy-haters who have been converted by this dish.

Stop press – I have been informed by a reader that Swedish ansjovis are, in fact, available at Ikea, of all places. Buy some next time you pop in for some shelving. Their Swedish meatballs are also fantastic.

I chose King Edward potatoes for their flavour and their ability to absorb the cream. This isn’t totally authentic – you’re more likely to find a more waxy potato in this dish in Sweden (I’ve even had it with new potatoes). I personally find that a floury potato works better for my own tastes, but you should feel free to experiment – if you want a waxier potato in the UK, Vivaldi would be excellent, as would Kestrel.

To make Janssons frestelse as a side dish for four to five people, you’ll need: 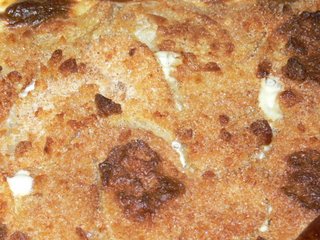 Preheat the oven to 225° C (475° F). Slice the potatoes thinly and make a layer of slices in a fish-scale pattern in a 2 pint gratin dish. (Some recipes call for potatoes cut in matchsticks; others for grated potatoes; others for thin slices. It doesn’t make any difference to the flavour, and you’re likely to find thin slices more manageable.) Slice the onion thinly and place a layer of slices on top of the potatoes, seasoning with pepper as you layer. You won’t need any salt; there is plenty of that in the anchovies. Lay out half the anchovies on top of the onions. Cover with a layer of potatoes, a layer of onions, more anchovies and a final potato layer. Pour over the cream, and sprinkle the top with the breadcrumbs mixed with the (totally inauthentic, so leave if out if you like) parmesan. Dot the surface with softened butter.

Bake in the oven, uncovered, for 30 minutes. The cream will have been absorbed into the potatoes and some will also have evaporated – top the dish up with some milk. Continue to cook for another 15 minutes, until the potatoes are tender and the breadcrumbs are crisp.