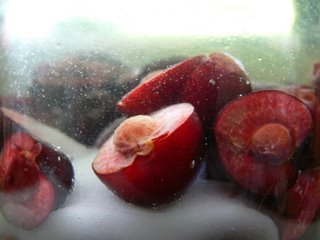 A quick and dirty one today – I’m in Cardiff to celebrate my sister-in-law’s PhD graduation. I am now officially the only Upton of my generation who can’t put the word ‘Dr’ in front of her name. Rats. (And congratulations, Stevie! I envy you the Tudor bonnet you get to wear for the ceremony like you wouldn’t believe.)

Cherries come into season just in time for you to lock them up in a cupboard with sugar and vodka until Christmas. Brandy is a traditional medium for fruit infusions; if you prefer to use that, the method will be the same. The five months between now and then will be just long enough for the liqueur to age into something nicely rounded and rich – an ideal tipple for Santa to enjoy with his mince pie. As always with fruity infusions, the making of this stuff is as easy as anything. You’ll need:

Halve the cherries, keeping the stones embedded in the fruit for their almondy fragrance (I should pre-empt the inevitable “but you will die of cyanide poisoning!” comment – you won’t), and put them in a large Kilner jar or another large, airtight vessel. Pour over the sugar and almond extract, and top the lot off with the vodka. Seal, and forget about the jar for half a year or so, straining into bottles when the liqueur is ready. Note that the colour will leech out of the cherries, leaving them greyish and unappetising-looking in December; some like them with ice cream, but I prefer to just consign them to the bin and busy myself with the interesting part of this recipe (the vodka).

You can use dessert cherries (which is what I’ve used here), or sour bird cherries. I have a tree full of bird cherries in the garden, but they all grow so high I can’t actually reach any – plus, the birds seem to get a kick out of them, so I leave them where they are. If you’re using a sour cherry, double the amount of sugar in the recipe. 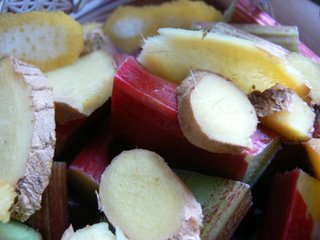