…And we resume normal service.

Apologies for the last month’s lack of updates, and thank-you to everyone who emailed (or recognised me from the few photos on the site, came up to me in a pub, and demanded to know what was going on). Gastronomy Domine is now officially back in the saddle, so please start checking regularly for updates again. 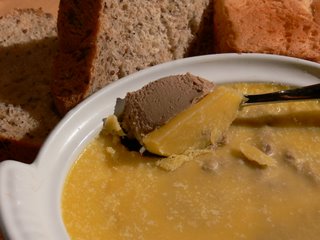 This chicken liver pate recipe is hopelessly good, and chicken livers themselves are hopelessly cheap. You’ll find them occasionally alongside the boned, peeled, pale and sad chicken breasts in the supermarket, selling for less than a pound (cash) per pound (weight). They’ll be flopping wetly in a sad, bloody plastic bag. Ignore the aesthetics here and just buy as many bags as you can, and stick them in the freezer for the day you decide you want a very easy, exceptionally good starter. Defrost before you begin, and follow the recipe as below. A frozen liver will not cook as firmly as a fresh one, but we’re not after texture here, since the livers will be blitzed in the food processor and then shoved through a sieve.

Far be it from me to condone lying to guests. But if you have an awkward type who remembers the grey stuff with tubes in from school and says they do not like livers coming round for lunch, please feel free to call this something else, and make like it’s just lovely . . . meat. The really duplicitous among you will get away with calling this a duck pate; I defy anyone to tell the difference. The Worcestershire sauce, nutmeg and chipotle chillis may sound like curious additions to a parfait like this, but you can trust me here; they work, and are not overpowering.

To fill a terrine dish, serving eight for a starter or four for a boozy lunch, you’ll need: 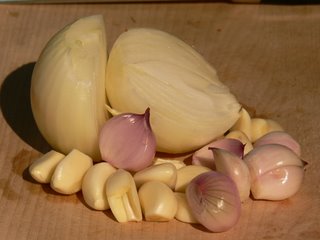 Rinse the livers carefully in running water and pat dry. Chop the onions, garlic and shallots roughly (don’t worry about being too even here; they’re going in the food processor shortly) and saute them in the butter in a large pan over a high heat for about four minutes. When the onions, shallots and garlic start to brown, add the livers, season with salt and pepper and cook for two minutes, keeping everything on the move.

Bring the heat down and keep sauteeing for another five minutes or so, until the livers are nearly cooked through. (You’ll be able to tell by prodding them with your spatula; they become less springy as they cook.) Add several gratings of nutmeg (I like quite a lot) to the livers with the Madeira, Worcestershire sauce and the chillis, and deglaze the pan. Turn the heat off when the liquid has reduced to half its original volume.

Turn everything in a bowl and leave to cool. Take half a pound of butter out of the fridge to soften at the same time.

When the livers are cool and the butter is soft, put the livers in the bowl of the food processor and puree. Add the softened butter a tablespoon at a time once the livers are pureed, and keep processing until it’s all amalgamated. Your mixture will be very soft (almost like buttercream icing), but don’t worry; it will firm up in the fridge. 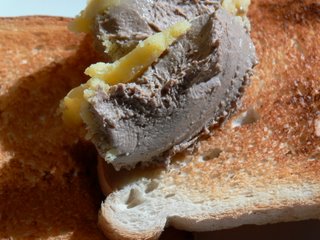 Push the puree through a sieve into a terrine dish. The straining through a sieve is important; it’ll buy you a gorgeously smooth texture which you can’t get through processing alone. Flatten the top with a spatula and melt the remaining ¼ lb of butter, then pour it over the surface. If you are particularly fussy, you can clarify the butter first, but I’m afraid I don’t bother.

Refrigerate the mixture for a couple of hours before serving. I’m still in two minds as to whether this works most brilliantly with Melba toasts or with a nutty, rustic bread toasted in thick slices. Experiment for yourself and let me know what you think.