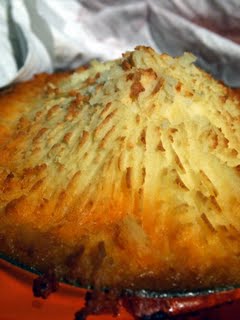 It’s that stodge-craving time of year, and very few things fit the bill better than a handsome cottage pie. This one has an intense and rich filling, and it’s blanketed with a generous layer of lovely, fattening mash. (In less apocalyptic weather, I’d use a bit less topping, but right at the moment I am mindfully using mashed potato as internal insulation from the biting cold.)

I’ve used veal mince here, from non-crated calves. It has a lighter flavour than beef, and it’s less fatty, but you can substitute beef mince if you prefer it. The root vegetables add sweetness and earthy depth – this is a wonderfully wintery pie. To serve four, you’ll need:

Chop the onion, carrot and parsnip into small dice. Take a large, heavy-based pan, and sweat them over a low heat in the olive oil until soft; the onions should be starting to take on some colour. Add the paprika, bay and thyme, and keep cooking, stirring all the time, for two minutes. Tip the meat into the pan and turn the heat up to medium. Stirring and scraping the bottom of the pan all the time, cook until the meat is browning nicely.

Pour the vermouth into the pan and let it bubble up. Add the Worcestershire sauce and tomato puree, then stir in the stock and a large pinch of salt (use all the fingers of your hand to pinch, not just finger and thumb). Bring the mixture up to a simmer and turn the heat down low again. Continue to simmer with the lid on for an hour, then remove the lid and continue to simmer for 20 minutes. Taste and adjust for seasoning.

At this point, you can put the pie filling in the fridge overnight if you have time. As with so many casseroled and simmered dishes, the flavour improves if allowed to settle and develop for 24 hours.

When you are ready to make up the pie, peel the potatoes and cook them as you usually would for mash. When mashing, add the butter, the milk and the nutmeg with a generous amount of salt. Put the filling in a pie dish and spread the mash on top. I like it spread in a sort of thatched roof arrangement, which is pure posing, but does look good. Make sure you mark your topping with a fork – this will ensure you get some nice crispy bits when the pie is cooked. 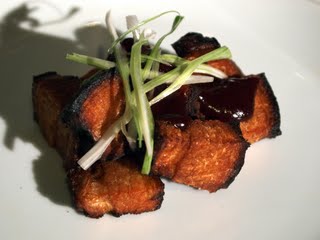 With what, you say? Bak kut teh. It’s a Hokkien Chinese term which translates roughly as “meaty bone tea”, and it denotes a particular herbal, scenty soup spicing which is traditionally meant to warm you from within. It’s got yang, this stuff. So much so that my mother and brother won’t eat it, because it makes them turn bright red and start sweating.

In a period when my village is only accessible over a hump-backed bridge coated with half a foot of sheet ice (it’s been like this since before Christmas), red and sweating is exactly what I’m after. Hurrah for yang.

You’ll find bak kut teh served regularly in Malaysia and southern China. Bak kut teh mixtures are available in the UK in oriental supermarkets, in sealed packs containing a couple of tea-bag style sachets. These sachets are preferable to the whole spices, which you also see sometimes in neat plastic packs – the whole spices can make your recipe a bit gritty. If you’re making the traditional stew, just pop a bag in a crockpot with some rib bones, simmer for a few hours, and serve with rice or as a noodle soup with a generous slosh of soya sauce. It’s hearty stuff – the traditional mixture includes star anise, angelica, cinnamon and cloves. This mixture is, somewhat eccentrically, close to what you’ll find in a British Christmas cake.

The recipe below is not a traditional use of a bak kut teh sachet, but it’s none the worse for that. Here, you’ll be combining those spices with rice wine, several gloppy Chinese sauces, honey, spring onions and garlic, and using this stock to perfume a slab of pork belly. The belly meat is pressed under weights overnight in the fridge, then chopped and fried in a wok until it’s crispy. I know, I know: but the long simmering will render a lot of the grease out of the meat, and sometimes the weather just calls out for fatsome, sticky pork.

I served mine with some sticky hoi sin sauce to dip, alongside a little of the stock, thickened with cornflour, to moisten the rice we ate with it. Hang onto the stock – you can freeze it and treat it as a master stock. I poached a couple of hams in mine, leaving them spiced and savoury but not overtly Chinese-tasting; it’s back in the freezer now, and I have plans to poach a chicken in it next. This procedure may sound overly parsimonious to those used to stock cubes, but it’s a method that produces a stock with an incredible depth of flavour, and you can keep using it indefinitely as a poaching liquid, adding a bit more water or wine and some more aromatics every time you cook, and making sure that every time it comes out of the freezer the stock gets boiled very thoroughly. There are restaurants in Hong Kong which claim that their master stock has been on the go for more than a hundred years.

To poach one boneless pork belly (enough for four, but be warned, this is very moreish) you’ll need:

Stir the liquid ingredients together in a saucepan that fits the pork reasonably closely, and slide the pork in with the star anise, garlic and spring onions. Bring to a gentle simmer, skim off any froth that rises to the surface with a slotted spoon, cover and continue to simmer gently for two hours.

Remove the pork from the cooking liquid carefully and place it on a large flat dish with high enough sides to catch any liquid that comes out of the meat as you press it. Strain the poaching liquid if you plan on using it as a master stock. Place a plate or pan lid large enough to cover the whole belly on top of the meat (the skin side) and weigh it down. I used a heavy cast-iron pan lid and all the weights from my kitchen scales. Cover the whole assembly with a teatowel and leave it in the fridge for 24 hours.

When you are ready to eat, remove the pressed meat to a chopping board and use a sharp knife to cut it into bite-sized pieces, about 2cm square. Bring about 5cm depth of groundnut oil to a high temperature in a wok, and fry the pieces of pork in batches of five or six pieces until golden (this should only take a couple of minutes per batch). Serve with shredded spring onion and some hoi sin sauce with steamed rice and a vegetable. 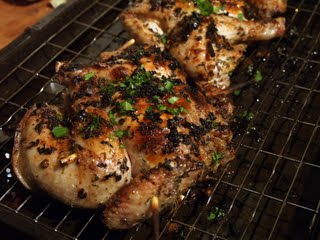 I’ll admit it – one of the motives in coming up with this recipe was in ensuring that the first word I typed on Gastronomy Domine in 2010 could be “Spatchcocked”, a word which hasn’t got any less fun since I last typed it.

It being just after the festive season, the shops are still full of meats a little beyond the ordinary, so my local supermarket has shelves full of lovely fatty bacon collars (three are in the fridge at the moment, waiting for a little boiling swim in some Chinese aromatics which will turn them into interesting hams); veal mince (superb in a cottage pie); turkey crowns (I walked straight past these grimacing); pheasant and venison mixtures for stewing; and poussins, ready-spatchcocked.

I really enjoy cooking a bird prepared like this. Cooking times are reduced massively by flattening a bird out, so the meat can be passed very quickly under the grill, leaving you with wonderfully moist meat. If your poussin hasn’t been spatchcocked, it’s very easy to do it yourself – there are instructions here for spatchcocking a full-sized chicken.

I just couldn’t bring myself to go outside into the freezing winter with the barbecue, so I’ve cooked this under the conventional grill rather than over charcoal. If you’re in a position to use charcoal here, please do – it’ll be delicious.

Reckon to serve one poussin per person (try saying that after a glass of post-festive Prosecco – incidentally, Prosecco is a very nice match to this dish with its Italian aromatics). Some packaging will suggest that one bird will serve two. It won’t. They’re small, they’re bony and they’re fiddly to eat. Much better to serve a generous whole poussin to each person than to find yourselves squabbling over too little food. To marinade two flattened-out baby birds, you’ll need: 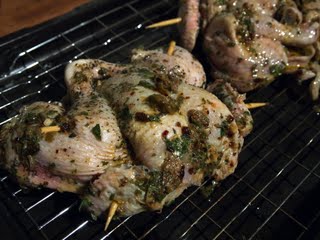 Mix all the marinade ingredients and smear them all over the poussins in a large bowl. Refrigerate for 24 hours with a cover, turning a few times.

When you are ready to cook, position the birds on a rack under a hot grill, as far from the element as possible, skin-side down. Spoon over some of the marinade and grill the non-skin side for about 12 minutes. Flip the poussins over so the skin is uppermost, baste with some more marinade, and cook for another 12 minutes, until the skin is golden brown. Check the meat is cooked through by piercing a thigh at the thickest part – the juices should run clear. if the juices are bloody, leave the birds under the grill for another five minutes and repeat the test.

Sprinkle the cooked poussins with a little more oregano, and serve with buttered rice and a sharp salad.