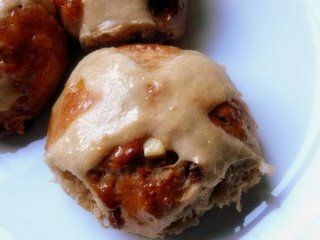 I know – hot cross buns are really cheap at the supermarket, so why would you bother making your own at home?

There’s a very easy answer: home-made hot cross buns are unbelievably delicious (unlike the supermarket variety, these are enriched with butter and eggs, and have more in the way of spices and fruit in their dough) – far better than the bought variety. They’re cheap, too. And if you’re interested in cooking something that will make your house smell divine for an afternoon, hot cross buns are just the ticket.

These sweet, yeasty little buns are a treat for Lent. (Pipe a Darwin fish on yours if you do not subscribe to this religious baking stuff.) According to Elizabeth David, the hot cross bun was a cause of great concern among the Protestant monarchs of England – Catholics were rumoured to bake them using communion wafers, and all that doughy symbolism was immensely threatening. The Tudors actually tried to ban them, but the populace would not be fobbed off with toasted teacakes, and eventually Elizabeth I passed a law allowing bakeries to make them at Easter and Christmas. 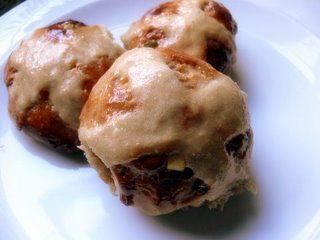 Get your yeast going by mixing it with all the starter ingredients in a small bowl, and leave it in a warm place to start working for fifteen minutes while you prepare the rest of the dough for the buns.

Mix the flour for the dough in a large bowl with the spices, pinch of salt and the citrus zests. Rub the butter, cut into small pieces, into the flour and spice mixture as if you are making pastry. When the mixture resembles breadcrumbs, stir through the sugar, peel and sultanas. Check that the yeasty starter mixture has plenty of large bubbles on the surface, and add it and the beaten egg to the dough mixture. Mix well with a wooden spoon, and when everything is amalgamated, start to knead the mixture with your hands.

Knead for ten minutes until you have a soft dough which is no longer sticky, and which stretches easily. (If after five minutes or so of kneading the dough still seems very sticky, add a little more flour – bread doughs will vary enormously in stickiness depending on variables like the humidity outside and the temperature in your kitchen.) Oil a bowl, and put the kneaded dough inside with some oiled cling film or a damp teatowel on top. Leave the dough for about an hour and a half in a warm place until it has risen to double its original size.

Knock the dough down, and make twelve round balls from it. Arrange them evenly in a baking dish, cover again and leave to double in size again in a warm place (between an hour and an hour and a half).

Preheat the oven to 220°C (425°F). When the buns have risen, make a paste for the crosses from flour and caster sugar, adding water until it is stiff and pipable. Using a piping bag or a freezer bag with a hole snipped in the corner, pipe crosses on each bun.

Bake the buns for 15-20 minutes until they are golden. While the buns are baking, take the zest and juice of the orange for the glaze and simmer it with the water and sugar until you have a light syrup. Brush the hot syrup over the hot buns when they come out of the oven.

You can serve these immediately or cool and toast them. Either way, they’re glorious with a big slab of butter.