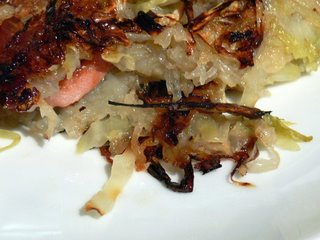 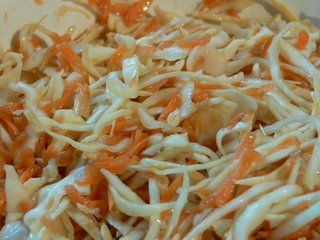 This coleslaw is very quick and easy to throw together, and it’s a great alternative accompaniment for your barbecues. Wasabi and ginger give this coleslaw a great SE Asian kick, and the sweet white cabbage and carrot shreds really respond well to the savoury dressing.

I’ve used powdered wasabi here, which you can usually find at Asian grocers. It’s sweeter and has more zip to it than the pre-prepared version. Check your wasabi packaging to make sure that wasabi (horseradish on some packs) is the only ingredient.

Shred the cabbage finely with a knife, and grate the carrots. Mix the vegetables together in a large bowl.

Add the vinegar to the wasabi in a small bowl, and leave aside for five minutes. Grate the ginger and stir it into the vinegar and wasabi mixture with the soy sauce and sugar, and keep stirring until the sugar has dissolved. Add the sesame oil, whisk briskly to emulsify all the ingredients, and pour the finished dressing over the cabbage and carrots. Toss everything together and serve immediately. This coleslaw does not keep well (the salad will wilt in the dressing), so you have a great excuse to eat it all in one go. 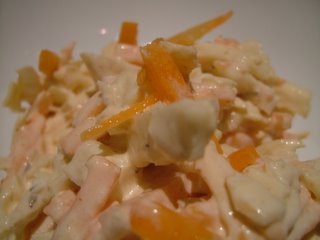