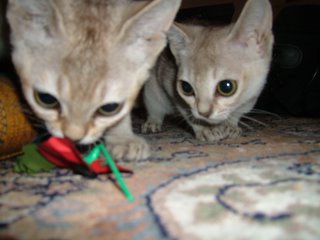 I know, I know – you don’t come here for cats. You come here for recipes and to hear me complain about other people’s cooking. But I just couldn’t resist it today; our two new kittens arrived this morning, and, like a proper feline proselytiser, have decided to share their arrival with you to encourage you to get some of your own. I will also talk a bit about food so you don’t become disheartened and stop visiting. Thanks to Clare at Eatstuff for hosting Weekend Cat Blogging.

These guys are Raffles (left) and Mooncake. Raffles is demonstrating his disdain for the Royal British Legion, and is busy finding out that last month’s charity poppy is not edible. They’re Singapuras: a breed which came out of Singapore’s drain cats. (See this site for more information on Singapuras.)

Being very fond indeed of Singapore (mostly because of the food and the fantastic hospitality, along with the shopping, if I’m honest), we decided that we should keep the theme going with their names, so Raffles is named after the Raffles hotel. (I stayed there when I was a little girl, before all the Michael Jackson visits and the rebuilding and rebranding, and had an exceptionally underage Singapore Sling in the famous Long Bar, where the drink was invented.) Mooncake is named after . . . mooncakes, the pastry traditionally prepared for the Moon Festival in China and Chinese communities. 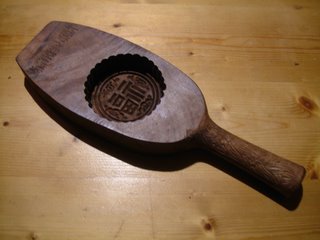 The mooncake is only available for part of the year. It’s made from a dense, sweet paste (usually lotus paste, and sometimes red bean paste), wrapped around one or two salted duck egg yolks, then covered with an oily pastry, pressed into a mould and baked. I don’t have any photographs of the non-four-legged kind, but there are plenty with this article, which talks about the remarkable variety of mooncakes available today in Malaysia. (I feel about mooncake adulteration much the same as I do about Martinis; you put chocolate in it and it’s not a mooncake any more.) Mooncakes were used by the Chinese to smuggle secret information past the Mongols in the 14th century (presumably the Mongols didn’t go for the salted yolks); people were instructed not to eat them until the day of the Moon Festival, when the rebellion began.

The festival falls on October 6 in 2006 – this will be the day when, according to the lunar calendar, the moon will be brightest. My own mooncake mould is an antique one I found in the UK; I may have a go at making a few for the festival next year. 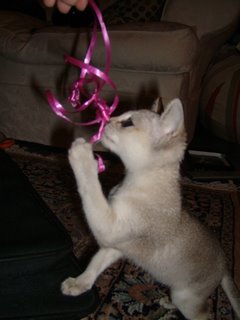 Finally, here is a furry kind of Mooncake, demonstrating her prowess in killing pink ribbon. I have bought them cat toys; they are ignoring them. My kind of cats.