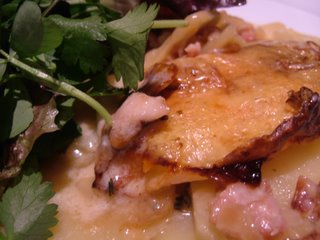 Please do not serve this to people on diets.

Tartiflette is a dish from the Savoy region of France, where they take their dairy products very, very seriously. Despite its extreme good looks and fantastic taste, it’s not actually a traditional recipe – it was invented in the 1980s by the union of Reblochon cheesemakers as a way to popularise the cheese. Since then, it’s become popular throughout the region, and different recipes have proliferated. This is my take on it.

At heart, and as the Reblochon cheesemakers intended, this is an absurdly creamy potato gratin with a whole cheese sitting on top of it. The nutmeg and thyme in here make the cheese sing, the rich Marsala makes the cream a velvety thing of beauty, and the sweet shallots and salty, smoked bacon infuse the whole dish. Serve with a salad and some crusty bread. (The salad is there so you can pretend you’re eating healthily.) Reblochon is hard to come by here, so I have used a Camembert. You can use any soft, washed-rinded, reasonably stinky cheese (an Epoisse would work equally well). To serve two for supper, with enough for lunch tomorrow, you’ll need: 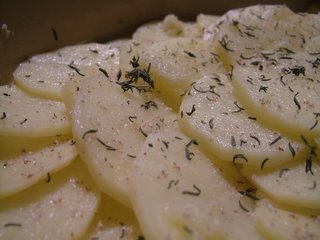 Chop the shallots into small dice, and cut the bacon into dice the same size. Saute in a little butter until the shallots are sweet and the bacon browning at the edges. Set aside. Peel the potatoes and slice them as thin as you can. (My new mandoline has made this the work of a couple of minutes, and I’m yet to injure myself on it, so I’m still recommending you go straight to the cookware shop and buy one. A plastic Japanese one is very inexpensive – mine was £5 – and works splendidly.) Arrange one overlapping layer of potato slices in the bottom of a heavy baking dish which you have buttered generously, then sprinkle over the thyme, a grating of nutmeg and half of the crushed garlic. Scatter over half of the bacon and shallot mixture, then spread half the crème fraîche over the top. Repeat with another layer, then put a final potato lid on the top. Slice the cheese in half along its equator, and cut each half into quarters. Arrange the pieces on top of the dish. Pour the Marsala over the dish, dot with butter, season (don’t use too much salt – you’ll get plenty from the bacon and the salty cheese) and bake in the hot oven for an hour, or a little longer – test to make sure that the potatoes are tender. It’s advisable to put a tray under the dish to catch any drips. 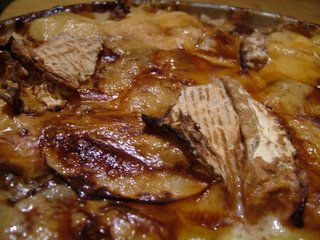 This is very rich. Make sure your salad has a tart dressing to offset the extreme creaminess of it all, and dig in. 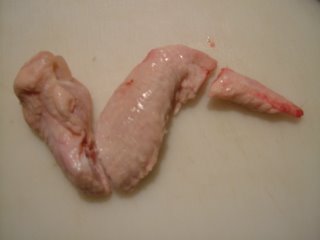 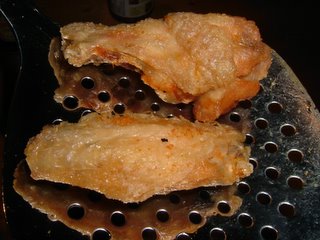 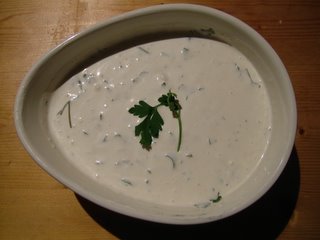