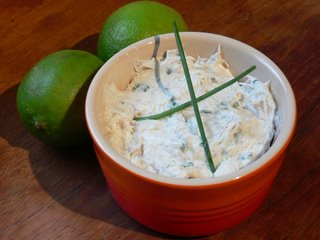 This is a lovely starter (or a light meal on its own), and looks a lot more complicated than it actually is, making it a great stand-by for dinner parties. I’ve prepared my smoked mackerel pate in little ramekins, but you can also take spoonsful of the pate and wrap them, Chinese dumpling-style, in a sheet of smoked salmon tied tight with a string of chive if you want something particularly pretty to serve. The finished pate is quite stiff, so if you line your ramekins or another mould with an abundance of cling film (saran wrap for Americans) you will also be able to tug on the edges of the film once the dish is cooled and turn out the smoked mackerel pate onto a plate. Smoked fish fans in and around Cambridge should head out to the River Farm Smokery in Bottisham for some very superior smoked mackerel.

I’ve used a generous amount of horseradish here. If you can find the whole root for sale, grab it and use a coarse grater (swimming goggles can come in handy here for minimising something similar to the effects of mustard gas) on it. Otherwise, the English Provender company does freshly grated horseradish in a little jar, which you can also use to make your own creamed horseradish by folding it into some lightly whipped cream with a pinch of sugar, lemon juice, salt and pepper to taste.

I really like this pate with melba toast. See this crab pate recipe for instructions on how to make melba toast at home.

To make enough for a starter for four, or lunch for two, you’ll need:

200g smoked mackerel
200g soft cream cheese
Juice of 1 lime
2 tablespoons snipped chives
1 tablespoon snipped chervil (leave this out if you can’t find any – it’s easy to grow at home and worth cultivating, because it’s often hard to find fresh in the UK)
2 teaspoons freshly grated horseradish
Salt and pepper to taste

You don’t need any machinery here – simply peel the papery skins off the mackerel, check for any stray bones, then flake finely with a fork. Stir the flaked fish vigorously into the cream cheese and lime juice with your fork (if you don’t have any limes use a lemon – I prefer the aromatic nature of lime here, but lemon will be just fine), and fold in the herbs, horseradish and seasoning.

Pack the pate into ramekins and chill until you are ready to eat. 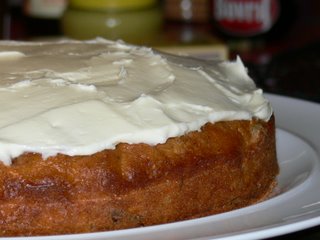 Carrot cake is often referred to by the squeamish, afraid of disturbing their guests by mentioning root vegetables, as passion cake. I’ve never been quite sure why, since the carrot (and, in my version, a mushed up banana) is a real star here; it’s what goes to make the cake so sweet, dense and deliciously moist. This is an easy recipe of the ‘bung everything in a bowl and stir’ variety, and it’s pretty foolproof, rising evenly and maintaining that lovely moist texture throughout. This cake keeps well for about five days in an airtight tin.

Cream cheese icing is a particular favourite of mine. You’ll see some recipes where other flavourings are added to the cream cheese and sugar (orange zest is a common one, and some add crushed nuts), but I find the cool icing much better when it’s plain, allowing the warm spices in the cake to come to the fore. (This cake is especially heavy on the nutmeg, which is fantastic with that banana.) For one cake, you’ll need: 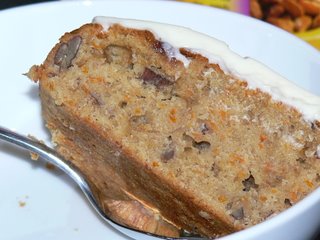 Put all the cake ingredients in a mixing bowl and beat well. Put the mixture in the greased, lined cake tin, and bake for 45 minutes (at which point the cake should be golden – a skewer inserted in the middle should emerge clean). Cool the cake completely on a wire rack.

When the cake is cool, beat the cream cheese and icing sugar together with an electric whisk until it becomes fluffy. Spread over the cake, slice and munch. 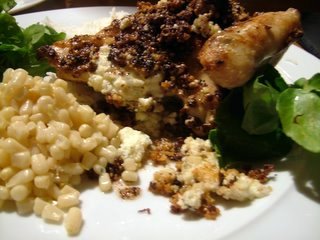 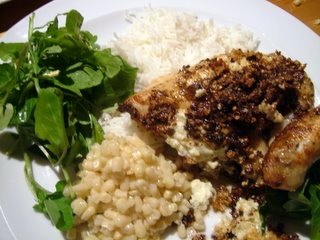