This one’s for my friend Michael and his daughter, who are going in for a pie competition this weekend. I’m very pleased with the way it turned out – it really does taste as good as it looks. This pie is made with an all-butter pastry (none of your revolting shortening here, Californians) which is flavoured with lemon zest, and has a juicy filling that’s very easy to put together. I have been obsessing a bit about meringue recently, and the lovely puffy cloud that makes the lid of this pie is a beautiful and really delicious way to top things off.

Michael and Yael are cooking in the US, where weighing scales are not the norm – unfortunately, cup measures aren’t the norm here in the UK, and I have real trouble using them when I’m baking.  As a result, I’ve measured by weight, not volume, below. For those who don’t have a set of scales at home,  there is a decent conversion tool here.

You’ll need an 11 inch (28 cm) flan case with fluted edges and a loose base that you can push out, and some baking beans (some use ceramic beans – I just used half a pack of dried butter beans from the cupboard). If you plan on transporting your pie, you may prefer to use a foil dish. 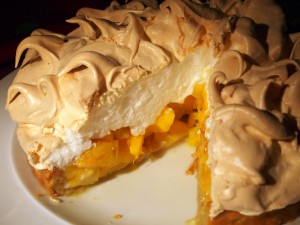 Start by making the pastry. Sift the flour and sugar into a large bowl, and rub in the butter with your fingertips until you have a mixture resembling breadcrumbs. Try to keep things as cool as possible as you work; your pastry will be crisper and shorter if it stays cold. (My grandmother used to make pastry in a large bowl placed in the kitchen sink while she ran cold water around it – perhaps there’s a degree of overkill in this, but it does work well to help your pastry along in hot weather.)

Use a butter knife to stir the lemon zest, yolk and water into the mixture until you have a stiff pastry. You may need a little more water according to the weather; the behaviour of pastry varies horribly according to how much moisture there is in the air on any given day. Wrap the pastry in cling film (saran wrap for Michael and Yael) and put it in the fridge for 30 minutes to rest.

While the pastry is resting, turn the oven to 200ºC (400ºF) and prepare the fruit. Quarter and peel the peaches, then cut each piece into three. Dice the mango in pieces the same size as the peach bits (I’m sure you all know the mango trick, but here’s a YouTube video of someone preparing a mango just in case you’ve not done it before). You can keep the fruit around the stone section to nibble off as a chef’s treat. Cover and set aside.

Roll the pastry out on a cool, lightly floured surface to fit your flan dish. (I have a marble slab for pastry that my Mum bought for me at a gravestone shop. Again, this is probably overkill. It’s also a bit sinister, now I think about it.) Line the dish with the pastry, use a fork to prick the base of the pie case all over, and cut a circle of parchment paper to fit in the bottom. Slip the parchment inside the pie and cover it with baking beans. Bake blind – that is to say, without any filling – for 20 minutes until the pastry is golden. Remove the beans and parchment and cook for another 5-10 minutes or until the base is dry and golden too. Turn the oven down to 150ºC (300ºF).

Prepare the meringue by whisking the eggs and vinegar for about five minutes until you have stiff peaks (the vinegar will not add a detectable flavour to your pie, but it will make the peaks of the meringue simultaneously crisp and chewy, like a baked marshmallow), adding the sugar a tablespoon at a time as you go. You should end up with a very stiff, glossy mixture.

Sprinkle the semolina into the base of the pie dish – this will soak up excess juices from the fruit. Fill the dish with the fruit mixture (depending on the size of your peaches and mangoes, you may find you have some left over to make a fruit salad with) and sprinkle over the sugar.

Spoon the meringue carefully all over the top of the pie in a dome, making sure there are no gaps, and use a spoon to tease it into lots of peaks on top. Put the pie in the oven at the cooler temperature (don’t worry if the temperature hasn’t quite settled down yet – a little bit of extra heat at the start of cooking won’t hurt it) and bake for 1 hour – 1 hour 10 minutes until the pie is an even gold colour all over and marshmallowy inside. Serve warm or cold, but do make it as close as possible to serving as you can manage to keep the meringue nice and high and puffy. 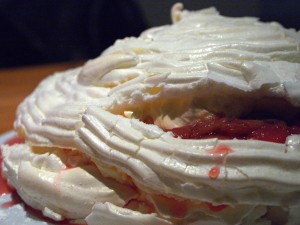 For the last couple of weeks, I’ve been blogging from a Booklet laptop lent to me by the friendly folks at Nokia, who saw me mention on Twitter that my own laptop had died horribly. (It was a long and sad process, the worst part being the fortnight before it gave up the ghost completely, over which period it tried its damnedest to barbecue any lap it was put on.) The Booklet goes back to Nokia today, and I’ll miss it; while the screen’s a bit too small to edit photos and work through piles and piles of text on optimally, its portability has been an eye-opener, and the 3-G-ness is brilliant – it’s been lovely to work on a machine that’s small enough for a handbag, that fits onto one of those pathetic trays on trains, and that I can easily manage in one hand while waving a wooden spoon in the other. Adieu, little Booklet. I shall miss you.

So then. Pavlova. In the dark days of the early 80s, I was set a piece of homework for our “finding out” class, where I was meant to write a short essay on Anna Pavlova. Nobody in the family knew anything more about her than that she was a 1920s ballerina, and so I ended up submitting an essay about meringue instead, which, happily, was something that everybody at home was more than educated about. The Pavlova is a New Zealand dessert which was named after the dancer in the 1920s (a period when naming a dish after a celebrity was a signal honour – like Peaches Melba and Melba Toast, Omelette Arnold Bennett,  Eggs Benedict and other eponymous dishes). Being a reasonably easy recipe which looks so handsome, the Pavlova, with its ballet skirt of meringues, is a favourite at Christmas in NZ – I wish Christmases here were sunny, so we could do away with the leaden puddings and have meringue instead. Tart fruits are best as a filling – I’ve made a lemon cream using some home-made lemon curd (it’s quick to make, and it’s a good way to use up the egg yolks, but shop-bought curd will do the job just as well) and some roast rhubarb from my friend’s garden. I’ve used Polish cherry squash to pink up the rhubarb – if you can’t find any, use grenadine or another reddish cordial.

The inside of a proper Pavlova reaches that lovely marshmallowy texture thanks to the addition of a little vinegar and cornflour to the meringue – when you have meringue, which magically turns itself from yellowish, wet egg-whites into glossy clouds, then into a simultaneously crisp and chewy nest, who needs molecular gastronomy?

Preheat the oven to 120°C (250°F). Lay greaseproof paper out on two baking trays, and brush each with melted butter. Dust the buttered paper with cornflour and shake off any excess – this will stop the Pavlova from sticking.

Beat the egg whites with an electric whisk or stand mixer, adding 330g sugar a little at a time, until they form soft, glossy peaks. Add the cornflour and vinegar to the mixture, and beat in gently.

Fill a piping bag fitted with its largest nozzle with the meringue, and pipe in a spiral straight onto the floured paper, starting in the centre, going round and round until you have a solid circle of meringue measuring about 7 inches in diameter. Be careful to leave some room around the meringue, which will swell as it cooks. Repeat on the other sheet of floured paper. You’ll have a little meringue left – use this to pipe a wall of meringue around the edge of one of the circles – this will be the bottom piece, and the lip of meringue will help to hold the filling in place.

Bake for 30 minutes, then turn the heat down to 100°C (210°F). Bake for another 40 minutes – the meringue should now be nice and dry, and should crack when you press it gently. Turn the oven off and cool the meringue in the oven with the door cracked open.

Once the meringue is cool, it can be covered and kept, without the filling, in the fridge – you can also freeze it successfully at this stage.

To prepare the filling, chop the rhubarb stems into pieces about an inch long, and put them in a large roasting tin, sprinkled with the sugar and cordial. (Use grenadine or another red cordial if you can’t find cherry – mine was from the local Polish shop.) Roast at 170°C (340°F) for 20 minutes, until tender and collapsing. Remove to a bowl and chill.

Whip the cream until it forms stiff peaks, and fold the lemon curd in with a spatula. Chill until you are ready to serve.

To assemble the Pavlova, spread half the lemon cream onto the base piece of meringue, leaving a bit of a hollow in the middle so you can really heap up the rhubarb. Spoon over the rhubarb (you won’t use all the juice, but it’s delicious, so keep it to one side to slurp at later), dollop the rest of the cream on top, and put the meringue lid on. Serve immediately. 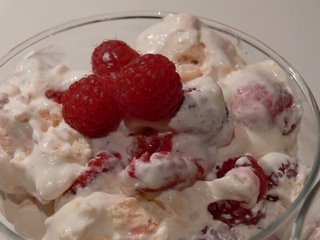