Widdling around with a shallot stuck with cloves earlier today, it occurred to me that this blog could do with a few very basic recipes; the sort that can form the underpinnings of a million different dishes, but which tend to get overlooked in favour of more complicated recipes. I’m guilty of occasionally writing unhelpful things like “make some gravy according to your usual method”, or “make a white sauce” here, which sort of instructions are absolutely no use at all if you’re not already a confident cook. So here, as the start of what I hope will be a semi-regular series of fundamental recipes, is a recipe for white sauce, classically called Béchamel.

My education in food started at a girls’ boarding school of the sort where we were taught all the skills needed to be a good little wife and housewife (and none of the skills necessary to operate in an environment where things like physics or grammar were necessary; happily, I overcame that hump when the school went bankrupt just in time for me to go to a proper school to learn how to punctuate, titrate and calculate vectors). The teaching in home economics, however, was second to none. We were led from boiling eggs (which we then devilled and made into salads for which we learned to make mayonnaise) through the various doughs and batters for scones, breads and cakes, via the flour-based sauces and stocks, soups and stews, to roasting and finally that most exciting of lessons where we learned how to fillet a fish. All pretty fundamental stuff, the sort of foundations on which the rest of home cooking stands – although entirely without the use of any garlic or herbs, because this was the 1980s and apparently potential husbands back then didn’t go for pesto.

The white sauce we learned was, in retrospect, a bland and awful thing; I seem to remember that it may even have employed margarine, but it’s retained a very important place in my memory because it was the first of these multi-use sauces we were taught. We used it in lasagnes and as a base for cheese sauces and other sauces for fish and meats. I discovered in the school’s copy of Ambrose Heath’s Book of Sauces that the same (or a very similar) sauce was the basis for all kinds of wonderful stuff: Mornay (cheese) sauce; the parsley sauce for a ham; old-fashioned English caper sauce; mustard sauce; Portuguese cockle sauce; onion Soubise; and sauce Nantua, a lovely thing which is flavoured with crayfish and brandy. I have my own copy of Heath’s Book of Sauces (first published in 1943 and now out of print, but it’s a book I see quite regularly in second-hand bookshops), and opened it when I was writing this post to a page which said proudly that “the sauce-maker [is] at the very head of his profession; these sauces will improve the best food and make the dullest dish tempting.”

Béchamel is, according to my copy of Larousse, an ancient thing, named after the 17th century Marquis de Béchamel, but predating him in the form of a velouté (similar to a white sauce but made with stock rather than infused milk) by  some considerable time; in the 19th century Carême called it one of the four “mother” sauces which form the foundations of French cuisine. It still, says Heath, contained veal alongside the milk well into the 20th century, at least until the early 40s when he was writing, and the standard recipe noted it although most chefs would already eschew the veal; but today the sauce is classically made with a roux or paste of butter and flour, which goes to thicken up a body of milk.

A Béchamel should always be made with milk which is infused with aromatics – otherwise, you’ll find yourself with an uninspiring sauce which reminds vaguely of glue. The herbs and spices here work well in almost any dish where a white sauce is called for; experiment depending on what you plan to do with your own. Chives, blades of mace and whole garlic cloves are good ingredients to play with. Infused milk freezes well, as does the finished Béchamel itself, so you can infuse extra milk and set some by for the next time you want to make something like bread sauce. Some extra infused milk in the freezer is also beyond useful for those days when you want to make a white sauce quickly but don’t have time to faff around with a shallot.

To make about half a litre of Béchamel, you’ll need:

Start a few hours before you mean to make up the sauce by infusing the milk. Pour the milk into a saucepan and add the cleaned parsley; bay; peeled and halved shallots, studded with the cloves; and whole peppercorns to the pan. Bring the pan to a gentle simmer, turn the heat off, put the lid on and leave in a warm place for at least two hours.

When you are ready to make the sauce, strain the milk into a jug and discard the bits of herb and shallot. Melt the butter over a low heat in a clean, dry saucepan, and sprinkle over the flour. Stir with a wooden spoon until the flour and melted butter are combined smoothly in a glossy paste – this is your roux. Be careful not to allow the butter or flour to colour.

Stirring all the time, add a small amount (about 25ml) of milk to the roux, continuing to stir until the milk is absorbed into the roux and you have a thick, uniform mixture. Add another small amount of milk, and repeat until about half the milk is incorporated. You might want to switch to stirring with a whisk at this point. Add the rest of the milk in larger amounts, whisking as you go, and continue to cook very gently until you have a thick and glossy sauce. When all the milk is incorporated, keep cooking for about five minutes to cook out any raw flour taste. Take a teaspoon of the sauce and taste it to adjust for the amount of salt you want.

If you need to keep the finished sauce warm, you can avoid the formation of a skin on top by melting a small amount of butter, floating it on top of the sauce and stirring it in when you come to serve, or by floating a piece of cling film on the sauce. And because you’re bound to want something to do with this sauce, I’ll post a recipe for a world-beating Croque Madame later in the week. 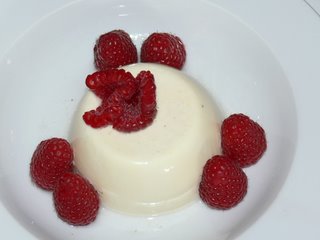 Panna cotta is Italian for cooked cream. It’s a light mixture of cream, milk and sugar (along with some honey in my version – I love the combination of milk and honey), set with gelatine and served cold. If you see panna cotta moulds for sale, buy a few – they make the job much easier. If you don’t have panna cotta moulds, ramekins work well too, but you will have to be a bit more patient when it comes to turning the set puddings out.

The vanilla is important here – I’ve used both vanilla sugar (sugar which has been stored with a vanilla pod buried in its jar) and the seeds from a vanilla pod in this recipe. Vanilla is expensive, but there’s nothing like the fragrance of the real stuff in this dessert. If, however, you can’t find any or prefer not to shell out for the real thing, a few drops of vanilla essence will work here too.

Put the milk in your heaviest-bottomed saucepan and sprinkle the surface with the gelatine. Leave for ten minutes away from the heat for the gelatine to soften.

When the gelatine has softened, put the pan on a low heat and, stirring continually, warm until the milk is heated through and the gelatine dissolved. The milk should not boil at this stage. Add the cream, vanilla seeds (slit the pod down its length and use the handle end of a teaspoon to scrape all the seeds out – you can keep the pod and put it in another sugar jar), honey, vanilla sugar and salt to the pan and stir until the sugar has dissolved.

Divide the mixture between six panna cotta moulds. Cover and put in the fridge until set (it’s best to leave the mixture at least overnight to make sure it’s completely firmed up). To turn out the moulds, dip their undersides in water from the kettle to loosen the mixture and pop a plate over them, then turn the whole assembly upside-down. Decorate with berries and serve chilled.