The recipe below is one I was walked through by Paul Flynn during our food bloggers’ weekend in Ireland. Paul has been called Ireland’s greatest living chef (“I don’t know who the dead ones are,” he says). As Nico Ladenis’ head chef back in London, he collected a positive galaxy of Michelin stars; and it was a surprise to everybody when he upped sticks and returned to Ireland, eventually settling back in his quiet hometown of Dungarvan to open his own restaurant with his wife Maire.

That restaurant, the Tannery, has been running for ten years now, and these days also supports a cookery school bristling with technology (Paul says that shortly, you’ll be able to stream video of lessons you’ve participated in over the internet), a rambling kitchen garden, supplying all the restaurant’s vegetables and herbs, that overlooks Paul’s old primary school (coincidentally, also the primary school of Niamh from Eat Like a Girl – there must be something in the water), and the Tannery Townhouse, a pretty little boutique hotel around the corner from the restaurant. We visited the cookery school for a lunch demonstration – there’s nothing like watching a chef like Paul Flynn prepare your dinner to work up the old appetite – the fruits of which we later got to empty down our throats like starving baby birds.

I don’t usually get a lot out of cookery lessons; it is annoying to be taught not just how to suck eggs but also how to separate and whisk them when you’ve been doing it for years. Paul’s great, though, tailoring classes to the skills level of his students without an iota of condescension, and I really enjoyed our few hours in the kitchen. Classes vary in length from the five-day, hands-on courses to evening demonstrations where a group can watch as Paul talks them through a three-course meal.

The recipe below is for oatcakes with spiced plums, and despite (or perhaps because of) the simplicity of its four elements, it absolutely blew me away on the day. You know those Prince Charles oatcakes from Dutchy Originals? The ones that taste a bit like salty cardboard? These are absolutely nothing like that. Creaming the butter and sugar together until the mixture is white and fluffy, then resting the dough (this is important – it needs to be very firmly chilled) in the fridge for several hours results in an almost shortbread-like texture, with a gloriously nutty flavour from the oats. These little oatcakes are very easy to put together, and the dough, uncooked, freezes very well, so it’s worth making a large batch and taking sticks of the dough out so you can cook some oatcakes fresh whenever you want some. As well as matching effortlessly with these plums, the oatcakes are beyond fabulous with a nice salty cheese. Over to Paul for the recipe (and thanks to Tourism Ireland for the two group photos):

Cream the butter and sugar together, then add the flour and oatflakes. Roll into sausage shapes, wrap in clingfilm and rest in the fridge. Cut into 1cm thick discs and place on a baking tray. Bake in 150ºC oven for 15 minutes.

Mix the cream and milk.  Bring to the boil with the ginger.  Whisk the sugar and egg yolks together. Add the boiling milk and cream to the sugar and egg mixture.  Bring back up over a medium heat, stirring all the time until the custard starts to thicken.  Strain and allow to cool and when cold, churn in an ice cream machine.

Bring apples  to the boil with the sugar and stew gently until they start to break down and the juices start to flow. Remove from the heat and allow to cool.

Allow 2 per person, cut in half

To make the spiced butter:

Combine the butter with the allspice and sugar and roll into a sausage shape and chill.  To serve, cut a thin slice of butter and place on the plums, and place under a hot grill until bubbling.

To put the dish together, spoon some of the compote onto the oatcakes, and top with plum halves. Serve with a dollop of ginger ice cream. 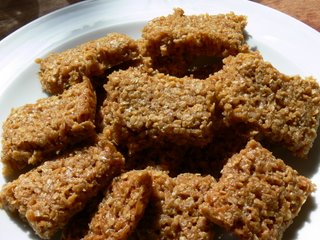 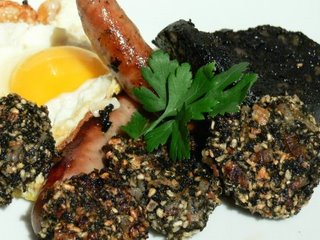 Laverbread is a real pub quiz question of a food. It’s a Welsh delicacy, an iodine-rich puree made from simmering Porphyra laciniata, a purple seaweed, for hours. The resulting paste looks unprepossessing, but tastes fabulous. Like oysters, its flavour is redolent of the sea – to eat laverbread is to imagine yourself standing on a rockpool-surrounded beach, breathing the salty, ozone-thick spray.

I’m lucky enough to have married into a family full of food-loving Welsh ladies. Dr W’s mum makes sublime Welsh cakes (little griddle cakes packed with currants) when we visit; she even has a special gas burner that lives in the cupboard especially for griddling purposes. (Yes, I plan to steal the recipe one day.) Her sister, Auntie S, still lives in Wales. Because she is totally fabulous, Auntie S sent a Welsh hamper to me here in the grim fens for my birthday. Alongside the tea blend, the Welsh honey, the plum jam, the whisky marmalade and the Caerphilly oatcakes lay a jar of pickled cockles and my first ever tin of laverbread. Straight out of the tin, it’s unprepossessing stuff (see the picture below), but it smells tremendously seaside-y, and licking the end of a finger dipped into it confirms that it’s delicious.

There are always pinhead-milled oats in the cupboard (I like porridge for breakfast), and a favourite Welsh application of laverbread is to mix the dark paste with fine/medium oatmeal to bind it and make it crisp, then to fry it in bacon fat and serve it alongside a cooked breakfast. I also added a non-traditional shallot to the mixture, which was extremely good, adding a base of sweetness against the iodine saltiness of the seaweed. (The shallot is strictly optional and not remotely Welsh.) Making these laverbread cakes took all of ten minutes, and they’re among the tastiest things I’ve eaten in months. To make about eight little cakes (enough to serve two – you’ll want four each because they’re gorgeous) you’ll need: 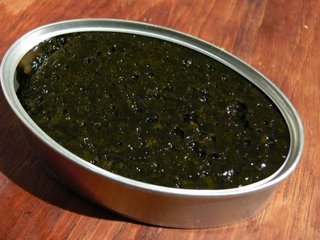 Dice the shallot very finely, and mix well with the laverbread and oatmeal until you have a thick paste. Form the paste into flat patties about five centimetres in diameter and a centimetre thick. Fry in the hot bacon fat in a non-stick pan for about three minutes a side, until the laverbread cakes are crisp and brown. Serve immediately as part of a cooked breakfast.