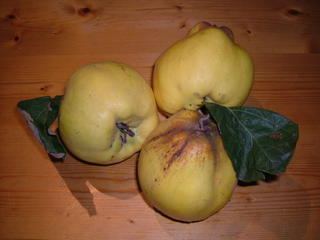 If, like me, you are now drowning in quince jelly (this is not a bad thing, per se, given that it makes a great gift and will keep in its jar for years), you may be looking for something else to do with your excess quinces. I know my parents have a whole stable filled with them, lined up neatly in cardboard crates. Like apples, the fruits will keep well in a cool, dry and dark place – check on them regularly as you would with apples though, because once one goes bad the rest will soon follow unless you remove it and throw it away immediately.

Membrillo, or quince cheese, is something you may have spotted on fashionable cheeseboards. It’s not a cheese at all, but a lovely heavy, sweet gel made from the flesh of the quince boiled down with sugar. It’s a wonderful contrast to salty cheeses like manchego – one of my favourite midnight snacks is simply a hunk sawn off the end of the piece of parmesan that’s always in the fridge, nibbled with a spoonful of quince cheese. When your quince cheese is ready, it will keep almost indefinitely in the fridge. I preserve mine in jars and spoon out chunks – some people prefer to make it in moulds, chill the moulds and turn the finished membrillo out when cold, then keep the pretty blocks wrapped in greaseproof paper and tin foil.

Peel and core the quinces and cut them into chunks. Quinces are an abominably tough fruit to work with, so make sure your knife is extremely sharp and be sure to protect your fingers from slips. Put the quince pieces in a large saucepan and cover with water, cover with the lid, then simmer very gently for around three hours until the fruit is soft when poked with a fork. It will have turned a lovely lipstick pink.

Drain the pieces and weigh them, and measure out an equal weight of sugar. Put the quince pieces in the food processor and blitz until you have a paste, then combine the paste with the sugar and the juice and zest of the lemon in a saucepan with a thick bottom (an enamelled cast-iron pan like one from Le Creuset is really useful here). Simmer the mixture over a very, very low flame, stirring until the sugar has all dissolved in the quince paste. Continue to simmer gently without a lid, stirring every now and then to make sure the bottom does not catch, for about two hours, until the paste is a deep red-brown and your spoon will stand up in it.

Spoon the quince cheese into sterilised jars and cover the top with a waxed disc before you put the lid on. The jars will keep in the cupboard pretty much indefinitely, but will need to be refrigerated once opened. 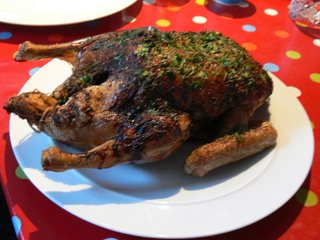 This is probably the worst photo I’ve ever put on this blog – this duck is out of focus and really ought to have been photographed later, once it was plated up. There’s a reason for this – the little guy was smelling so good that the hordes gathered around the table had the duck carved, chewed and well on the way to being digested about fifteen seconds after the shutter closed.

I’ve mentioned roasting ducks before in relation to collecting the fat for use in potato dishes later. This recipe should ensure you a perfectly crisp, deliciously seasoned and glazed skin, fragrant and toothsome flesh, and plenty of delicious creamy gravy to anoint the meat. A large duck like this (the plate it’s sitting on is a giant one) should serve four.

Remove the bag of giblets from inside the carcass before you begin, and use the contents to make stock. Take any poultry fat out of the inside of the duck along with any excess skin, and use it to make gratons.

Dry the duck carefully inside and out with kitchen paper. Use a fork to prick the skin all over the bird (this will help excess fat to escape and help the skin to crisp beautifully), and place the halved lemon and the spring onions inside its cavity. Mix the salt and the spices together in a bowl, and rub the skin well with them, keeping a teaspoon of the mixture to one side. Sprinkle any remaining rub inside the bird. Place on a rack in a baking tray in an oven preheated to 200° C (400° F) for 45 minutes per kilogramme plus 15 minutes, basting every half hour with its own fat. (The duck will release a lot of fat; that rack is there to make sure that the bird doesn’t sit in the fat and burn.)

Chop the herbs very finely and combine them with the quince jelly in a separate bowl.

To make the sauce, take the stock and bring to a simmer, reducing until flavourful. Stir the cornflour into the cold glass of wine and tip the mixture into the bubbling stock with the crème fraîche and the teaspoon of rubbing mixture you reserved when you prepared the duck. Keep the pan on a low simmer.

Ten minutes before the end of the cooking time, use a teaspoon to ‘paint’ the uppermost skin of the duck with the jelly and herb mixture and return the bird to the oven. Keep a teaspoon full of the jelly/herb mixture and stir it into the sauce. Taste the sauce and add more jelly or tarragon and salt if you think it needs it.

The duck will be beautifully glazed, its skin crisp and savoury from the spice rub. Rest the bird for five minutes once it comes out of the oven and serve with roast potatoes, a sharp salad to cut the richness of the flesh, and some green vegetables. Remember to decant the fat from the roasting tin into a large jar to keep in the fridge for roasting and frying potatoes. 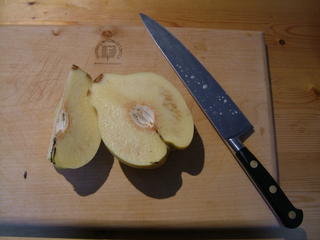 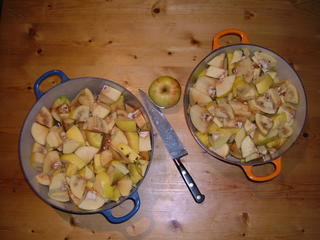 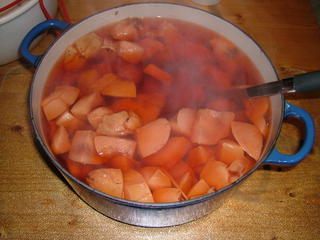 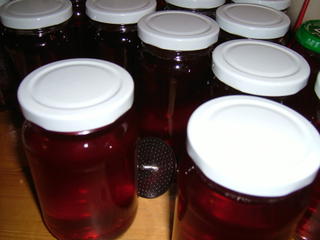