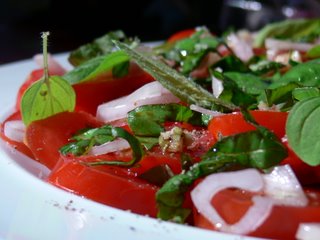 This tomato salad recipe is the perfect, sunny, flavourful accompaniment to long summer’s evenings in the garden, basking by the barbecue and drinking silly amounts of Pimms. There’s no cooking involved; just some slicing which is easily done with a glass by your side and the sun pouring in through the kitchen window.

If you’re like me, you’ll find yourself with a glut of tomatoes late in the summer. This salad is remarkable in that you can make it again and again, and it doesn’t become boring. It brings out the gorgeous flavour of the sun all those tomatoes have soaked up; the basil, oregano and sweet balsamic vinegar all work together to make your tomatoes platonically tomato-ish.

Use whatever tomatoes come to hand. This salad is really pretty with a couple of yellow tomatoes scattered among the reds, or with large and small-fruiting varieties mixed together. Here, I’ve used small vine tomatoes and some baby plum tomatoes. To serve four as a side dish (or two as a lunch on its own with some crusty bread) you’ll need: 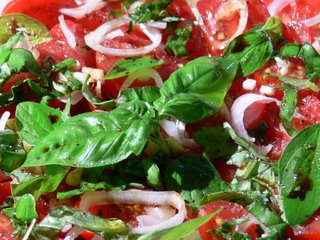 Slice the tomatoes and lay them out on a large serving plate. Slice the shallot into thin rings, chop the garlic as finely as you’re physically capable of, and scatter over. Roll the basil leaves into little tubes and slice them thinly to cut it into thin strips (chiffonade), and throw them over the salad with the whole oregano leaves.

Immediately before serving, drizzle the olive oil and balsamic vinegar over, and season with salt and plenty of pepper. Crusty bread will come in handy to mop up the juices. 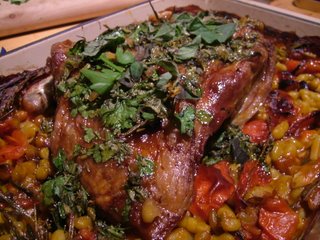 Spring is finally here in Cambridgeshire. In celebration of the fact that some of my bulbs are finally flowering, I thought I’d eat a dear little fluffy baa-lamb.

This recipe is wonderful for this time of year, when the sun is bright and there’s a jug of tulips on the windowsill. The herbs and sweet tomatoes are a real foretaste of summer. Enjoy this with a cold glass of white wine, or a pint of real ale. 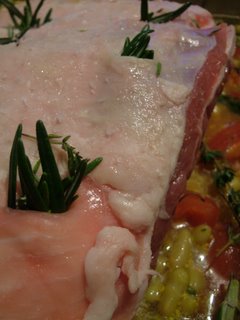 Quarter the tomatoes, and mix them with the the remaining rosemary and garlic and the rest of the ingredients in a heavy baking tray. Place the lamb on top, skin side up, and roast for an hour and twenty minutes at 180°C. 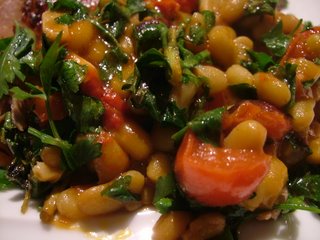 While the lamb is roasting, finely chop the parsley and oregano, and combine it half of it with two teaspoons of the quince jelly and a large pinch of salt. Remove the lamb from the oven and smear the herb paste all over the skin. Stir the other two teaspoons of quince jelly and the rest of the herbs into the beans around the lamb, and return to the oven for ten minutes, until glossy and beautiful. The beans will have soaked up the juices from the tomatoes and meat, becoming sticky, rich and packed with flavour. You should be left with some meat for tomorrow’s sandwiches – the beans are also delicious cold. 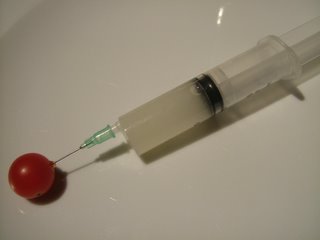 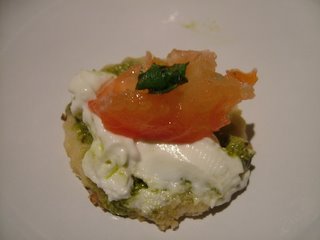