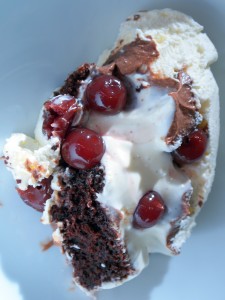 I was sent a lovely big jar full of Kirsch-soaked Griottine cherries to try a few weeks ago. The brand’s new in the UK, and they’re very good – big, boozy, stoned Balkan Morello cherries steeped in a heck of a lot of Kirsch for six months. These Griottines are available online in the UK; you can also use cherries you’ve steeped yourself in this recipe if you do a bit of forward planning in the summer.

I do love a Black Forest cake, but it’s the non-cake bits I enjoy the most: the cherries, the chocolate, a creamy filling. So I decided to use them in a Black Forest trifle, which also gave me the excuse to make a chocolate custard, stick it in a bowl and call it art. There are several stages in making this trifle, and making everything from scratch will, of course, give you the best end results; but you can cheat a bit if you want by buying a chocolate cake rather than making one, or by using a pre-made custard as the base for the two custard layers before you add the chocolate, vanilla and marscapone. I promise not to tell anyone.

To serve eight or thereabouts – this is a party dish – you’ll need:

You will also need
75g good dark chocolate
750g marscapone
250ml whipping cream
About 400g (the contents of a Griottines jar) cherries and their very alcoholic soaking liquid. I say “about” because I found myself busily scoffing them as I put them into the trifle, so the resulting dish didn’t contain a whole jarful.

Preheat the oven to 180ºC while you prepare the cake mix. Grease a 25 cm loaf tin.

Sieve together all the dry ingredients in a large bowl, add the eggs, milk, butter and almond extract, and beat with an electric mixer for about five minutes until you have a thick, smooth batter. Scrape the batter into your prepared tin  bake for 1 hour. When the cake is done, a toothpick poked into the middle should come out clean. Cool for a few minutes and invert onto a wire rack to finish cooling.

Make up the custard base, which you will use for both the vanilla and chocolate custards, while the cake is cooking. Some purists abhor Bird’s custard. I love the stuff. If you can’t bring yourself to use it (or if you don’t live in the UK and can’t find any in your local shops), use 2 tablespoons of cornflour instead. Mix the sugar and custard powder/cornflour in a bowl with a little milk taken from the pint until you have a smooth paste. Bring the rest of the milk to a bare simmer (it should be giggling rather than chuckling) and pour it over the mixture in the bowl. Return the whole lot to the saucepan over a low heat and, whisking hard, add the egg yolks and the seeds from inside the vanilla pod to the mixture. Keep cooking until the custard thickens and remove from the heat. Transfer to a jug, lay a piece of cling film directly on top of the custard’s surface, and chill until cool.

In a third bowl, beat the remaining 250g of marscapone with the whipping cream and sugar until the mixture is stiff.

To construct the trifle, cut the cake into slices and line a large glass bowl (mine broke a while ago, which is why the picture at the top of the page is of a single portion of trifle) with it. Sprinkle the liquid from the cherries all over the cake to soak it, and scatter over a quarter of the cherries. Smooth the plain custard layer over with a spatula, adding a few more cherries as you go. Make sure plenty of the cherries are pressed up against the glass sides of the bowl. Add the chocolate custard with some more cherries, and finish with the layer of cream and marscapone, scattering more cherries on top.