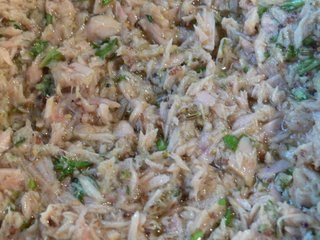 This is a lovely starter for lazy days when you’re eating outdoors. I like to dibble crudités (especially sweet batons of carrot) and good bread in this tuna dip. It’s also very good spread on toast or crostini, and, cold or warmed through, makes a good strong sauce to dollop on bland cooked fish.

Apologies for the horrendous photo – by the time I realised how rubbish this looked, the bowl had been licked clean, so there was nothing to photograph.

To serve two as a starter with crudités and bread, you’ll need:

Bash the fennel seed lightly in a pestle and mortar, and chop the herbs. Chop the anchovies very finely. Put all the ingredients in a mixing bowl and mix well until the dip ingredients all come together to form a rough paste. Add a little more olive oil if you prefer a looser texture, and taste for seasoning. Serve chilled as a dip or crostini topping, or warm through in a small saucepan to use as a sauce. 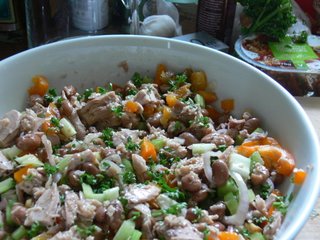 This salad is brilliant at barbecues, where it’s a great light, sunshine-filled alternative to any giant hunks of charred meat you might be serving. It’s full of assertive flavours – the lemon, deliciously sweet peppers and raw onion, the celery and, of course, the tuna. It’s also very simple, and only takes a few minutes to throw together.

I’m a lazy cook. I very, very seldom cook beans from scratch – they’re very cheap to buy in cans, and in a salad like this the borlotti beans don’t suffer at all from coming out of a tin. If you prefer to use dried beans, you’ll need to soak them overnight, then boil for ten minutes. Take the pan off the heat and leave the beans to soak in their cooking water for two hours. Borlotti beans are a lovely little legume. They’re related to the kidney bean, and they have a lovely creamy texture and a slightly sweet taste. If you can’t find any, try making this with cannellini beans, which make a good alternative. To make a large bowl, big enough for a large family barbecue, you’ll need:

Chop the onion into quarters and slice finely. Mince the parsley and cut the celery and pepper into small dice. Crush the garlic and flake the tuna. Put the beans in a sieve and rinse them under cold running water.

Toss all the prepared ingredients together in a large bowl with the olive oil, lemon and seasoning, and cover with cling film. Leave in the fridge for an hour before serving for the flavours to mingle.