The recipe I posted for sticky toffee pudding back in 2008 resulted in a comments thread full of people reminiscing about A La Carte magazine. Back when I was a horrible precocious kid, my Mum used to get the magazine monthly. It was a beautiful thing, with gorgeous photography (unusual for food publications in the 80s), and some masterful typesetting, which I used to think back to fondly when I started working in magazines myself twenty years later.

The recipes were heavily influenced by the extravagant, rich French style of dinner party cooking. Lots of butter and cream, everything spiked with as much booze as you could lay your hands on, and the sort of preparation that would have your mother sweating and swearing in the kitchen for entire afternoons as she stitched ducks and chickens together for hours at a stretch.

My Mum used to lay on the most fabulous dinner parties, where she’d cook from A La Carte and from books by those 80s superstar chefs like John Tovey, Robert Carrier and Raymond Blanc. I didn’t get to come downstairs to try the food, but I could smell it wafting up through the bannisters that overlooked the dining room, and sometimes got to sample bits in the kitchen while she cooked. I also sneaked downstairs in the mornings while Mum and Dad slept the night’s partying off to work my merry way through the leftovers, including whatever wine was left at the bottom of glasses, thereby starting early on a life of dipsomania. She’s amazing, my Mum. She used to make petit fours from scratch. She made lucullan heaps of fruit glazed with lightly beaten eggwhites and dipped in caster sugar so they shimmered as if coated in powdered diamonds. The table would be laid with silverware polished until you could kill an ant with the reflections off a spoon. And we kids would be packed away to bed after handing out the chocolate-dipped physalis, devils on horseback, freshly roasted almonds or whatever other pre-dinner nibble she’d settled on, so as not to aggravate the guests. It was enough to raise an appetite that, in my case, has not yet subsided.

Although A La Carte, with its complicated and time-consuming recipes, hasn’t survived, it turns out that a lot of those who subscribed to the magazine kept their copies to cook from. Mike Ratcliffe, a reader of this blog, very kindly sent me scans of two pages from the December 1984 edition. They include a Christmas pudding recipe you’d be well-advised to make now ready for December, a boned and stuffed turkey recipe that other commenters here have been waxing lyrical over, and a yeasted sugar tart that sounds just the ticket. (I think you can probably leave the smoked salmon ice made wobblesome with gelatine safely in the 1980s, though; and the Persian recipes on the second page lack the sort of spicing we’d be used to nowadays.) Click on the images to enlarge them to a readable size. If any other readers out there have copies of the magazine with scans they’d like to share, please send them to liz@gastronomydomine.com – I’d love to hear from you, and I know there are lots of people out there who have similarly happy memories of 1980s bacchanalia they’re just as keen as I am to reproduce. 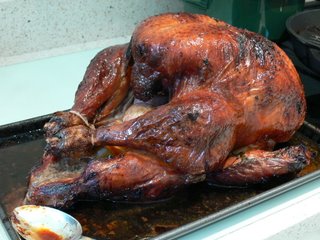 Only twelve months early for your Christmas turkey, and eleven months early for your Thanksgiving turkey, here’s a roasting technique that will make even the most fibrous, leaden bird a moist, crisp-skinned joy. (Not that this one started out either fibrous or leaden – Dr W’s parents bought it from Lishman’s in Ilkley, which is one of those butchers that has almost as many awards as they do pork chops on display – and with good reason. This was a beautiful turkey.)

Turkey is a troublesome meat. It seems that whoever designed the bird constructed it to be difficult and dry – the fibres in the meat are very long and can tend towards stringy; and any bird this large (ours was 14 pounds, which is heavier than both of my cats put together) is at risk of drying out while you try to make sure it’s cooked through. There are, however, some features of the turkey which make it really worth cooking at least once a year, not least its fantastically delicious skin, which, if cooked like this, will turn mahogany-brown, caramelised and crisp. I caught several members of the family peeling skin off the carcass and eating it standing up in the kitchen, which is always a good sign. The bird’s liver is also excellent. It’s rich and creamy, and is really worth saving to enrich your gravy with (of which more later).

So what’s the trick to achieving a moist flesh and crisp skin? It’s as easy as anything – remember that post from 2008 about my experiments with brining? I scaled things up from the jointed chickens I’d been working with earlier, and brined the whole turkey in a savoury, Christmas-y, spicy mixture for two nights. You’ll need a big vessel to do this in. I bought a cheap dustbin from the hardware store, and thought I was being original and clever until Dr W’s Dad, whose own father was a butcher, said that bins were the brining vessels of choice when he was a boy in his Dad’s shop, helping to brine huge cows’ tongues. There’s nothing new under the sun. The really good news about the brining is that it makes the flesh so moist you won’t have to turn the turkey onto its breast partway through cooking. (Anybody who has ever tried to turn a searingly hot turkey partway through cooking will be punching the air with joy on reading this.)

Put your turkey in the brine two nights before you plan to cook it. This amount of brine should be sufficient to cover turkeys up to 20+lb – and if you’re cooking a turkey bigger than that, I have news for you. That’s not a turkey. It’s a pterodactyl. Ours was 14lb, and was submerged nicely. To make the brine, you’ll need:

For the inside of the bird, the glaze and the giblet stock you’ll need: 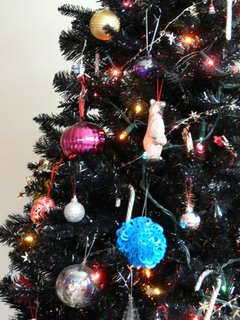 Combine all the brine ingredients in your carefully cleaned bin, and stir with a wooden spoon until all the salt and sugar have dissolved. The pineapple is important. It has an enzymatic action on the protein of the turkey, making the flesh softer and more moist – it also tastes fantastic. Lower the turkey in carefully (don’t drop it in – it’ll splash and you may tear the skin) and leave the bin, covered with a sheet of cling film and its lid, in a cold place until the morning you want to cook it. Outside the back door should be fine in cold December, unless you live in an area with foxes, in which case the coldest part of the garage is probably preferable.

Turkey, brined or otherwise, is at its best when cooked quickly. Don’t stuff the bird (not even the neck) – this will just make the cooking time unacceptably long. I’ll be providing a recipe for stuffing cooked separately later this week.

Remove the turkey from the brine two hours before you intend to cook it to allow it to come to room temperature. Push a quartered large onion, a halved lime, a halved tangerine and a halved lemon into the bird’s cavity. Preheat the oven to 220°C (430°F) when you are ready to start cooking, and make a stock by simmering all the giblets except the liver (which you should save in a bowl until you make the gravy) in a litre of water in a covered pan with some salt, a halved shallot, a peeled carrot and a bay leaf while you cook the turkey. Melt together 200g of salted butter and 4 tablespoons of maple syrup, and use the mixture to baste the turkey before it goes into the oven. Cook at this high temperature for 30 minutes. The turkey should already be turning golden brown. Baste again, cover with tin foil, and lower the temperature to 180°C (350°C), basting every twenty minutes or so with the butter and maple syrup mixture. For the last 15 minutes of cooking, remove the foil and baste again.

Cooking times for different weights of turkey are as follows:

Poke with a skewer behind the thigh joint to make sure the bird is done (if it is, the juices will run clear – nay, spurt, if you’ve brined it – they should not be pinkish), and rest the finished bird for 20 minutes before serving. This will give you time to make the gravy. Sauté the liver in a tablespoon of soft butter until it is just cooked, and use the back of a spoon to push it through a sieve into a bowl. Skim all but a few tablespoons of fat from the pan juices from the turkey and discard, and with the roasting pan on a low heat on the hob, whisk the flour into the remaining fat and the meat juices. When the flour is blended with the fat, tip in the wine and whisk as it bubbles up. Add a couple of ladles of the giblet stock until the gravy is the texture you want, then whisk in the sieved liver. Add any more juices which have come from the resting turkey, and season to taste.

Over this week, I’ll be posting all the trimmings you need to go with your Christmas dinner – bread and cranberry sauces, stuffing balls, chipolatas in pancetta, some really fantastic roast potatoes and (cough) sprouts. I realise it’s early in the year, but these are all fantastic with roasts year-round, they’re fresh in my mind, and you have a bookmark button if you want to save all this to read for Christmas 2009.