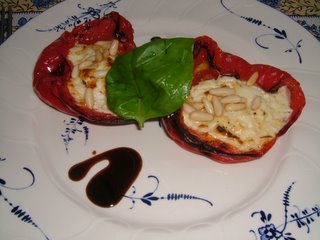 Elizabeth David describes a Piedmont Pepper which I make quite frequently for a starter. It’s very easy – you halve a red pepper (sometimes you may find that cutting the pepper along the ribs which divide it naturally and dividing it into three or four instead works better for you, especially if you have a lot of people to feed), and place in it a slice of raw tomato, a slice of raw garlic, a piece of preserved anchovy as small as your little fingernail, a drizzle of olive oil and a little knob of butter. The whole lot is then baked in a medium oven until the peppers are soft and sweet (about 45 minutes).

My Mum suggests augmenting this recipe with a disk of goats’ cheese cut from one of those logs you can buy in the supermarket, some toasted pine nuts and a drizzle of balsamic vinegar, which is what you can see in the picture. Lovely stuff – the salty, sharp cheese contrasts with the sweet peppers, and the texture of the pine nuts works beautifully with these soft ingredients.

For once, I didn’t have to reduce the balsamic vinegar to get the consistency I needed for drizzling in a sweet, treacly swirl. My brother has recently spent six months living in Modena, and when our parents last visited him, they spent an awful lot of money on a minuscule bottle of balsamic vinegar which, aged in a barrel for 40 years, was considerably older than I am. It’s amazing stuff.

Balsamic vinegar this old is a rare and precious thing. A true balsamic vinegar’s only ingredients are grapes – some cheaper varieties will add caramel for flavour, colour and texture, but a genuine bottle will only contain Trebbiano and Spergola grapes. The grapes are simmered over an open fire in copper cauldrons until they lose more than half their water content, and the resulting syrupy grape must is placed in wooden barrels with a starter of already-aged balsamic vinegar, which helps fermentation.

The barrels are subject to strict controls; only oak, cherry, chestnut, mulberry, acacia, ash and juniper woods are approved for the aging process. The vinegar takes on deep flavour from the wood it’s stored in. A young balsamic vinegar is aged for three to five years – the oldest can be up to 150 years old.

There is an ancient tradition of producing balsamic vinegar in Modena; the earliest reference to the vinegar was made in 1046AD, when a barrel was given as a precious gift to the King, later Emperor Enrico II of Franconia. Its gastronomic application hasn’t always been appreciated – balsamic vinegar pops up in historical texts as a panacea to be smeared on festering body-parts or drunk for sore throats and labour pains, and as an antiseptic. 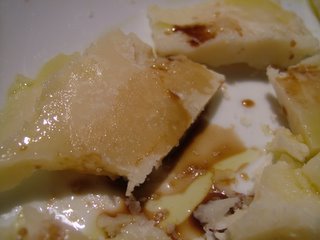 If you are lucky enough to come into possession of a good bottle of old balsamic vinegar, try drizzling a tiny amount on some thin slices of parmesan cheese I’ve added some truffle-infused olive oil here too) and eating with a glass of something red and robust. Dip a strawberry into a drop. Lean back, smile, and consider how blessed Emperor Enrico was, with his whole barrel of the stuff.