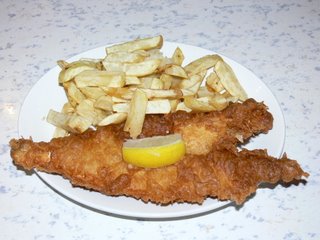 Fish and chips. It’s a meal as British as you can get. Every British town has its fish and chip shop. Some only dispense disappointing bags of wet stodge and vinegar, but some will sell you something astonishing – golden-crisp batter enveloping moist, flaking fish, and chips which have been nowhere near a freezer, cut by hand from a heap of potatoes in a room at the back of the shop. (The chips in this picture do, as a reader pointed out, look rather pale and anaemic. Please be assured that this is just an artifact of my rotten photography; the room was dark and I had to use the flash, which has substantially drained them of colour. They were actually several shades darker and very crisp.)

My grandparents lived near Grimsby, which was historically England’s busiest fishing port, and summers spent with them involved a diet heavy in batter and newsprint. Fish and chips down south with my parents were a little different; the northern variety tended to be fried in beef dripping in the good old days, when we had little regard for our cholesterol levels and a healthy respect for the cold-repelling qualities of a plump abdomen, but down south, where we lived, vegetable oil was the standard frying medium.

Luckily for me, my parents-in-law live only a few miles from the Good Food Guide’s Fish and Chip Restaurant of the Year. Bryan’s, tucked down a side-street in Headingley, serves fish and chips in the proper northern tradition. It’s been in the same location since 1934, and although it’s seen some changes in that time (Dr Weasel’s father, Professor Weasel, remembers 1970s formica-topped tables and old ladies in greasy aprons – now it’s much more chi-chi, with a carpet, glossy banquettes and dishes like salmon with asparagus hollandaise alongside the fish and chips), the core of the business, namely that astonishingly good plate of battered haddock and crisp fried potatoes, remains the same. 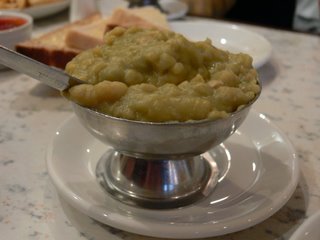 There’s a certain amount of ritual involved with ordering fish and chips. There must be strong, hot tea to drink alongside your meal – none of your Darjeeling or Earl Grey here, though; it must be builder’s tea, with lots of milk and sugar. You need an accompanying plate of bread and butter (preferably in alternating slices of white and brown). There must be a dish of mushy peas; these are dried marrowfat peas which have been simmered until soft, alarmingly frog-green, and sludgy (and which have been famously mistaken for guacamole by soft southern politicians visiting the frozen north). Your chips should be anointed with malt vinegar, and salted heavily. This is so very important that John Major interrupted his day-job back in the 90s to advise people that the vinegar should be added first, in order that the salt is not rinsed off by the gushing torrents. 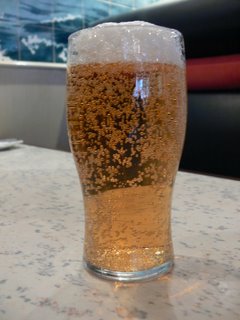 I like a glass of shandy with my fish and chips. It’s a throwback to a mildly alcoholic childhood with my grandmother, who used to feed us sherry before Sunday lunch at home with gay abandon, but who found that the fish and chip shop wouldn’t serve her 10-year-old granddaughter and even younger grandson lager, so had us make do with shandy. My glass at Bryan’s was half Tetley beer from the brewery down the road, and half lemonade.

Bryan’s fish and chips comes in a variety of sizes and cuts. While cod stocks are so threatened, Bryan’s and many other restaurants will not serve the fish, but this is no skin off my nose; I’ve always preferred haddock anyway. There’s also plaice, hake and halibut, all encased in a shatteringly crisp, salty batter. Fish and chips done well requires exceptionally hot fat, which makes the thick-cut chips wonderfully crisp on the outside and fluffy within. It also means that the fish cooks so fast that done properly, the flesh inside the batter is uniquely juicy, flaking at the touch of a fork.

If you’re in or near Leeds, take the detour to Headingley and order yourself one of these giant plates of haddock, sized for Yorkshire appetites. I can’t think of another meal that costs less than £10 which comes close to being this good.