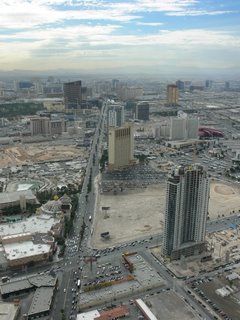 I’m a little distracted today – I just found out this morning that my friend Oli received his long-awaited lung transplant in the night. I’m sure you’ll all join me in wishing him, his girlfriend and his family all the best. And please sign up to the donor register!

If you read this blog regularly, you’ll know I spend rather more time in Vegas than is natural for someone living in Cambridgeshire. This is largely down to the city’s amazing proliferation of high-quality restaurants. The days of ubiquitous shrimp cocktails and foot-long hot dogs are long gone (although, of course, this is a consumer paradise, so if you want a foot-long-cocktail-dog, you are bound to be able to find it somewhere). These days, you’ll see real, serious cooking around almost every corner – here’s an Alain Ducasse restaurant, there a Michael Mina one; Thomas Keller of the French Laundry runs Bouchon, a bistro serving up, among other things, Vegas’s very best breakfast at the Venetian hotel; Joël Robuchon wants you to exchange all your poker winnings for a $1000 per head meal at The Mansion; home-grown chefs like André Rochat serve up exquisite French meals downtown . . . these days, Vegas is a serious, grown-up foodie destination.

Our next trip is scheduled for this Christmas, and I promise I’ll spend more time than I usually do documenting what I eat (I always find blogging a bit of a chore when I’m on holiday). If you’re not familiar with the Michelin guides, their scheme is to award one, two or three stars to the very best restaurants in each destination. The number of stars awarded is calculated with reference to the food (of course), the style and elegance of the dining room and the service. Here are the restaurants that Michelin gave stars to this year:

I know the city’s restaurants pretty well, and so I was surprised to read Michelin’s final ratings. They’ve done a pretty good job of drilling down 16 of the city’s best restaurants (although I’d quibble with some of the choices, especially at the bottom end) – but the number of restaurants awarded two and three stars is alarmingly small given the range and quality on offer in the city, particularly when you compare the food, location and service with restaurants in France, where the Guide Rouge is far more generous with the stars. Paris boasts 14 restaurants with three stars – even Strasbourg gets two.

I think there are a few reasons for this. First of all, you’ll notice the preponderance of French restaurants in the above list – 12 of the 16 given stars cook in the French style. Michelin have historically valued French cooking over other cuisines (and in the past I feel they’ve made mistakes when trying to extend their cultural ambit, as with London’s downright horrible Tamarind, an Indian restaurant which largely seemed to get its star for reasons of political correctness). Still; Wing Lei in particular deserves more recognition than a single star and Nobu is a lazy choice; there are better Japanese restaurants in town like Shibuya at MGM Grand, Shintaro at Bellagio and Okada at the Wynn. It’s also surprising to see only one steakhouse on the list. Bradley Ogden is excellent, but one area where Las Vegas really excels is in presenting traditional American cuts of meat in thoughtful and, dare I say it, gastronomic ways. Michael Mina’s Stripsteak at Mandalay Bay, Charlie Palmer Steak at the Four Seasons or Delmonico at the Venetian should, by any metric that Bradley Ogden measures up to, be included here too. 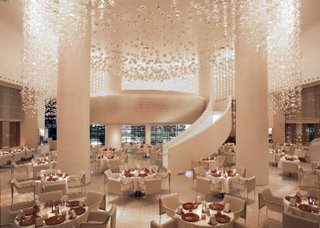 Secondly, Michelin seem to be making their old mistake of treating décor as an issue as important as the food. Mix at Mandalay Bay is an Alain Ducasse restaurant in name only – I would be surprised if he sets foot in there from one year to the next, and foodwise, it’s not at all comparable to his (wonderful) Paris ventures. It is, however, one of the most beautiful dining rooms you’ll find in the world, and I suspect that this is where it earns its star. Mix is a restaurant I actively avoid eating in, although the attached bar is great and worth a visit – you get all that wonderful interior design to look at, a great view all the way down the strip and an expensive Martini. 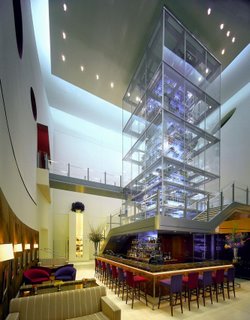 Similarly, Aureole (also at Mandalay Bay) is another good-to-middling restaurant with a breathtaking dining room. Aureole boasts a 42-foot wine tower with ‘wine angels’; waiting staff who abseil up and down the thing to retrieve the bottle you’ve asked for. It’s not Charlie Palmer’s best restaurant in town – the steakhouse at the Four Seasons beats Aureole for food, and also for its wonderful view from the very top of the tower the Four Seasons inhabits.

Now, I may be attributing chauvinism where there is none to the Michelin staff, but I do
feel that there’s still a snobbish refusal to countenance that American food can possibly be as good as what you can find in France. Any of the two-star restaurants might, I suspect, have scored higher if they’d been located in a French city. And a few of those one-star restaurants also deserve bumping up a grade. So buy the guide if you like red, but don’t rely on it for an accurate picture of Las Vegas’s dining landscape.

If you like to travel with a restaurant guide, Zagat

serves Las Vegas well, although it does sometimes get a little exuberant. I’ve always liked the series, which sends its own reviewers to restaurants but also builds its short reviews around the thousands of experiences that its readers send in – the Vegas guide also includes a nightlife section. (The Zagat guide to Paris is, for me, rather more reliable than the equivalent Guide Rouge.) The AAA guides are useful and reliable for eating in North America, and several Las Vegas restaurants make their 5-diamond category. Keep an eye on awards from the James Beard foundation as well – if they give a restaurant or a chef a nod, you should pay attention and eat there. You can also get a surprisingly good estimate of a restaurant’s quality by looking at its menu, and these are increasingly available online at the restaurants’ websites. Finally, there are some really excellent websites full of reviews by foodies who love Vegas. I particularly like Larry’s Las Vegas Restaurant Guide, which explores a really eclectic selection of restaurants.