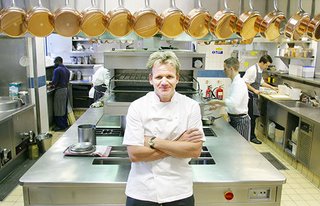 I am not really a lady who lunches. I would very much like to be, but my options are limited, given that I live in the middle of a field in Cambridgeshire. All the same, about once a month I try to meet up with a friend who lives in London, where we lunch as if it’s going out of fashion. I am fortunate in having found a friend who, like me, gets such an absurd amount of pleasure from good dining. She’s one of only a couple of female friends I have who do not just sort of dibble around with wet salads which they do not finish, and it’s good to have a lengthy conversation about hollandaise sauce without being considered a fatso.

Why do so few people I know manage to eat and drink without fear and shame? We worry about the ethics of eating, about the size of our bodies. It’s absurd; food is such a pleasure. Imagine the joy that suffuses your whole body when you eat something as simple as a good bacon sandwich, let alone as glorious as the foie gras mosaic I had at Gordon Ramsay at Claridges. Imagine how good for you all those endorphins and cheery feelings are – and now compare this to the mealy-mouthed, guilt-ridden attitude we’re being encouraged to have to food. You know exactly what I’m talking about – the press releases and government factsheets announcing that any amount of bacon will give you cancer; that eating meat will kill the planet; that thick-sliced bread is making us all obese; that toast cooked beyond the palest gold will fill the female body with specific feminine carcinogens; that the French duck population is being tortured to death to satisfy your shameless greed; that a properly salted meal will raise your blood pressure and stop your heart beating. Where does this awful gastronomic puritanism come from? I believe strongly that the joy, companionship and straightforward sinful pleasure of eating well are in themselves so good for you that any negative effects dealt out by that bacon sandwich are squelched immediately.

This year’s standouts, lunch-wise, have been Le Gavroche (review to follow) and last week’s visit to Gordon Ramsay at Claridge’s. Both restaurants offer a really keenly priced lunch menu, and are usually booked out a couple of months in advance – make sure you plan well ahead. The Claridge’s lunch menu comes in at a bewilderingly low £30 (although once you’ve supplemented this with an aperitif and a glass of wine or two, you’ll find the bill creeping skywards).

Gordon Ramsay, for those who have been eschewing food, newspapers, television and conversation for the last twenty years, is one of only three chefs in the UK to hold three Michelin stars – he’s actually been awarded a total of 12 of the things spread among his various restaurants, which starts to look a little greedy. In recent years, he’s also carved out a television career so successful that he’s starting to become almost tiringly ubiquitous. He’s also something of a sex symbol, which might explain the high proportion of female diners at Claridge’s, one of whom was shoving a salad around her plate. (I have never seen the sex symbol thing myself; Ramsay is not referred to by other chefs as Old Celeriac Head for no reason.) Primarily, though, he’s a thoughtful, artistic chef with an eye to the whole dining experience, so service, table dressing and ambiance at his restaurants are given great weight. 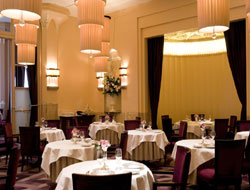 The dining room at Claridge’s is surprisingly feminine. Like the rest of the hotel, it’s a glorious slab of art deco frivolity, with soft apricot and oyster touches. It’s a pleasantly quiet dining room with all the soft furnishings and moulded walls, so you can have a conversation with your dining partner without having to listen to everything the people at the next table are saying. I’ve read about Claridge’s daft mineral water list, which can go up to £50 for a litre, but we just asked for sparkling water and were given Badoit – probably my favourite mineral water – and didn’t have to sift through the list of deep-sea Hawaiian stuff and the juice squeezed out of volcanoes.

The amuse bouche was a butternut squash soup. The title fails to do it justice – it was simple but perfect; a creamy, buttery, velvet-soft pool of liquid gold. GSE’s cured trout starter was tender and sweet, and came with delicate little crisps made from Charlotte potatoes and a lovely little salad of cucumber. My own mosaic of pheasant, foie gras and winter vegetables was one of those things I’d be perfectly happy to smear all over myself and run up and down in. It was simply glorious – a perfect foie gras terrine punctuated with jewels of sweet, poached root vegetables and tiny morsels of pheasant. The vegetables lifted the deeply savoury foie to sparkling, twinkling heights, and an earthy little beetroot salad at the side of the plate provided a quiet and sensitive foil. It was one of the best dishes I’ve eaten this year.

Update, Jan 2008 – a couple of months later, Gordon Ramsay published the recipe for this gorgeous terrine in the Times. Good luck sourcing some raw foie gras – if you do make this, I’d love to hear from you.

Partridge, skin seared crisp and then dressed in an almost impossibly glossy, buttery jus came next. It’s good to see partridge at this time of year served innocent of pears – like rabbit and baby carrots, it’s a conceit that is funny the first time you see it, but which quickly gets tired. It came on a bed of diced celariac which had been cooked in more of that wonderful butter – nutty and lactic.

I chose the dessert on the strength of its accompaniment – a ball of star anise ice cream. A plate arrived with an almondy, apple-y paragon of tarts, while the ice cream had a wonderful, almost custardy texture and an intense fragrance from the anise. GSE’s winter fruit crumble, with another ice cream (ginger this time) disappeared before I got a look in.

I’ve only one complaint – my coffee was not, as requested, decaffeinated. We’d planned on some shopping after lunch, and this, in London at Christmastime, is best approached without extreme caffeination. I thrummed and palpitated my way down Oxford Street jittery, but happy beyond belief.

9 Replies to “Gordon Ramsay at Claridges”