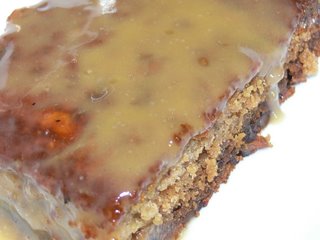 Way back in the early 1980s, my mother used to get a magazine (now sadly defunct) called A La Carte. It was some serious aspirational 1980s stuff – all glossy pages, gorgeous photos and recipes full of exotic (for the 80s) things like sun-dried tomatoes. Long after the rest of her collection had vanished, one issue of the magazine stayed downstairs on the cookery book shelves. It was Easter, so there was a fluffy rabbit frolicking in salad leaves on the front, and a bold headline saying ‘Lettuce play’. Page upon page of salad with more bunny porn followed – along with a recipe for something called an Ooey, Gooey Sticky Toffee Pudding – the sole reason for preserving this issue of the magazine for thirty years.

These were the dark days of the Falklands and the miners’ strike. Nobody else in Bedfordshire seemed very interested in food. At school and at my friend’s houses, pudding was always instant Angel Delight, a scoop of fatty, pink ice-cream or jelly. At home, it was different – where the other children were eating bowls of instant custard with a banana chopped into them, my lovely Mum was making sticky toffee pudding, and we had the most inventive salads in town.

Chop the stoned dates finely with a small sharp knife and put in a bowl. Sprinkle over the bicarbonate of soda and pour over the hot water, stirring well. Set aside for ten minutes while you prepare the rest of the cake mixture.

Cream the butter and sugar together, then beat the eggs into the mixture. Gradually stir in the sifted flour, then fold in the date mixture. Pour the batter, which will be quite loose, into a greased, 20 cm square cake tin, and bake for 35-40 minutes, until a skewer comes out clean. The cake will have risen, but not dramatically – this is quite a dense pudding.

Make the sauce while the cake is baking. Melt the sugar and butter together with the vanilla pod and cook over a medium heat, stirring, for five minutes. Stir in the double cream and bring to a low simmer for another five minutes.

Make holes in the top of the cake with your skewer and pour over half of the sauce. Serve immediately with extra sauce to pour over at the table, and a jug of cold double cream. (Some like this dish with ice cream, but I like cream best.)