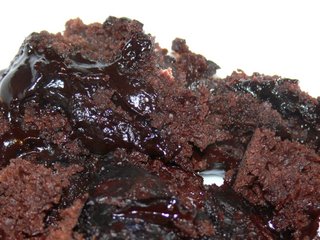 This is a rich chocolate pudding, which makes its own sauce when cooked and rises like a chocolate sponge island in a syrupy chocolate sea. Your mother probably made chocolate puddle pudding. I’ve been asking around, and everybody’s mother seems to have had a similar recipe – and what sensible mothers they were, because this is rich and delicious, malevolently chocolatey and so quick and easy that my cats could make it (given opposable thumbs, the ability to read recipes and access to some weighing scales, an oven, bowls and…you get the idea). To serve six, you’ll need:

Measure the flour and vanilla sugar into a large mixing bowl with two tablespoons of the cocoa powder and the baking powder. Melt the butter and chocolate together, and when melted, add them to the bowl with the milk. Stir with a wooden spoon until everything is well blended, and spread the mixture (which should be a thick paste) into the bottom of a baking dish. (I used a 20×30 cm dish.)

Mix the soft brown sugar with the remaining four tablespoons of cocoa, and sprinkle them over the top of the sponge mixture. Pour over the hot water (this should be hot from the kettle but not boiling) and put in the oven for 45 minutes. The sponge pudding will rise through the puddle of chocolate sauce. Serve with vanilla ice cream or a big dollop of cream.