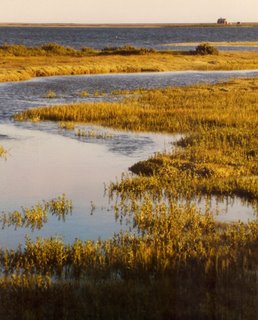 I really like the Norfolk coast at this time of year – all bluster, leaden skies and empty salt flats. We were surprised to find Blakeney unexpectedly packed with visitors at half term weekend, and couldn’t find a lunch table at any of the local restaurants. Not such a disaster, it turns out: we equipped ourselves with bottles of dandelion and burdock and pork pies at Blakeney Delicatessen at the top of the High Street, where I also found myself hypnotically drawn to to a moist, sticky slice of orange syrup cake.

Down the hill to the quayside, where we ate our impromptu picnic. Mopping up the cake crumbs to the accompaniment of howls from a little boy whose fishing net had just fallen into the harbour, we looked up to notice that the fish van in the car park at the bottom of the High Street was open and doing good business. Twelve oysters later, we also bought half a pint of brown shrimp (skins on), wrapped up in paper. We slipped the shrimp into a plastic bag, popped them in a pocket and started to hike out along the salt flats. The perfect afternoon: walk for an hour through National Trust coastal landscape, sit on your coat with a good friend, and share a bag of sweet, sweet shrimp. These tiny brown shrimp are best picked up in the hand, the head and tail pinched together between your fingers, and the flesh nipped off between your teeth. The shells are fine and edible; a shrimp with the shell still on will be sweeter and more delicious, although the nice man at the fish van will also sell you peeled shrimp if that’s more your thing. 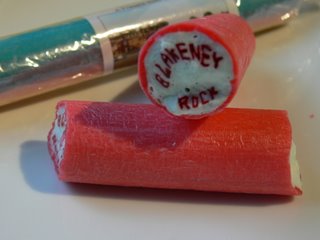 Back to the village, and we found a nice old gentleman in a booth next to the medieval guildhall, selling seaside sweeties. He sold me a couple of sticks of rock – if you’re not familiar with the English seaside, you’re missing a treat in sticks of rock. A brittle, insanely sweet cane of boiled sugar and peppermint, pulled and folded when still hot until it becomes slightly aerated, rock usually has the name of the town you’ve bought it in written through its length in pink, sticky letters. The words are folded into sticks of rock by hand, a bit like making (deliciously minty) millefiori glass – it’s quite a skilled job, and some of the people making rock have been doing it for fifty years or more.

Up the hill again to The Moorings, a local bistro, for afternoon tea (in my case a toasted teacake and a pot of Earl Grey – the iron-stomached Dr W managed a whole cream tea). We went to the chandler’s to buy a souvenir fridge magnet shaped like a lighthouse, and waddled back to the car via a church fete where I bought a pudding basin. It shouldn’t be the case that a day spent hiking over salt marshes should end with you feeling fatter than when you started, but I managed it with aplomb.

5 Replies to “Seaside snacking in Blakeney”