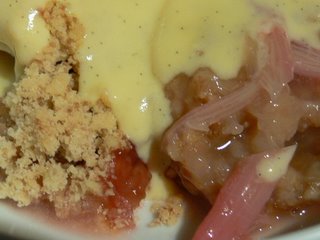 The forced rhubarb is arriving in the shops at the moment. It’s a lovely delicate pink when raw, and can tend to lose its colour a bit when cooked, unlike the very red rhubarb from later in the season – but it tastes deliciously of spring and makes a great crumble (or crisp, as the Americans call it). The lovely buttery, crunchy topping is impossible to get wrong, and this is a good recipe to start kids on before they try to make pastry, so they can get used to the rubbing-in method.

The custard below is made in the traditional way with egg yolks, vanilla and milk, but also includes a spoonful of Bird’s instant custard. The Bird’s, full of cornflour, stabilises the other custard ingredients as well as adding some flavour, so you’ll end up with a supremely custardy custard, rich, silky and packed with vanilla. Alfred Bird, a chemist, came up with his custard powder in 1837, because his wife loved custard but was allergic to eggs: a romantic gesture that’s still going strong after nearly two centuries. Mrs Bird is no longer with us, so additional yolks are not an insensitive addition.

For this first crumble of the year, I wanted the buttery, clear taste of the crumble topping to shine against the fragrant spring rhubarb, so this is a plain topping with a rhubarb-only filling. If you want to jazz things up a bit, try adding a couple of teaspoons of ground ginger to the topping and two or three tablespoons of crystallised ginger to the filling. To serve six, you’ll need:

Preheat the oven to 180°C (350°F). Slice the rhubarb into one-inch chunks. Place in a saucepan and sprinkle over the caster sugar. Cook gently, covered (you don’t need any extra water because there is so much in the rhubarb) for 15 minutes, stirring occasionally, until the rhubarb is cooked but still chunky.

While the rhubarb is simmering, make the topping in a large bowl by rubbing the butter into the flour gently, using your fingertips, until the mixture resembles breadcrumbs. Stir the sugar through the crumble mixture.

Put the rhubarb in a shallow cooking dish (I like my le Creuset tatin dish for this) and sprinkle the topping over. Scatter a few drips of water from the tips of your fingers over the surface – this roughens up the top and makes things even crispier. Bake for 30-40 minutes until the crumble topping is golden brown.

Mix the sugar and custard powder in a bowl with a little milk taken from the pint until you have a smooth paste. Bring the rest of the milk to a bare simmer (it should be giggling rather than chuckling) and pour it over the mixture in the bowl. Return the whole lot to the saucepan over a low heat and, whisking hard, add the egg yolks and the seeds from inside the vanilla pod to the mixture. Keep cooking until the custard thickens and serve immediately. (If you need to keep the custard warm for a while before serving, lay a piece of cling film directly on its surface to avoid forming a skin.)